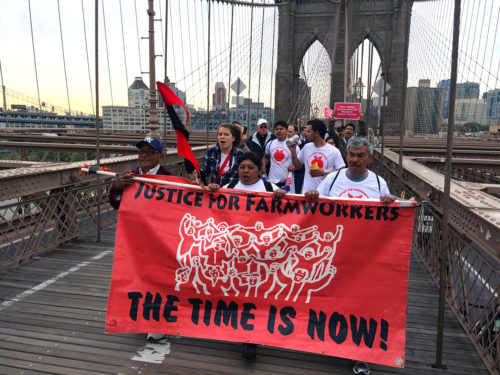 Marchers carried banners, flags, and noisemakers as they chanted and crossed the Brooklyn Bridge into Manhattan May 21 on Day 7 of the 18-day Farmworkers March for Justice event, spearheaded by Rural & Migrant Ministry. Photo: Amy Sowder

If one more New York senator supports the passage of the Farmworkers Fair Labor Practices bill, that decision could turn it into law and affect the lives of more than 60,000 farmworkers statewide, many who climb ladders to pick apples, crouch to shake the soil off onions, and stand for hours to sort cabbage on conveyor belts – often for 75 hours a week, with no day off, no overtime pay, no injury compensation.

“What do we want?” yelled labor advocate David Galarza to the crowd waving red “New York Farmworkers Deserve Equal Rights” signs as they marched under the Brooklyn Bridge’s iconic arches into Manhattan.

“Justice!” the crowd replied as they waved red flags and beat on djembe drums. “When do we want it?” Galarza called out. “Now!” they replied. 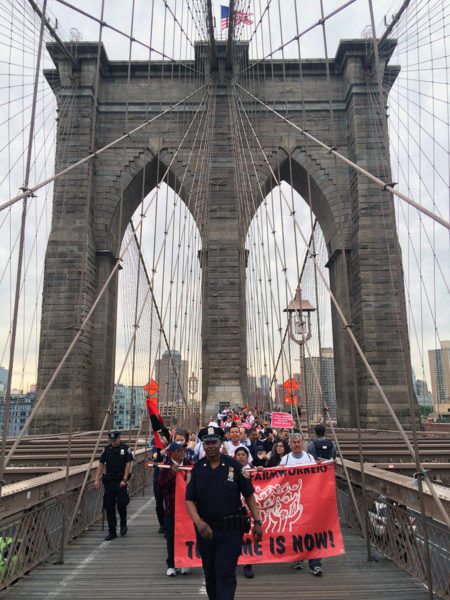 A New York City police officer leads marchers across the Brooklyn Bridge into Manhattan on May 21. Photo: Amy Sowder

On Saturday, May 21, the group paused for a press conference at New York City Hall, marched through SoHo toward lunch at St. Mark’s Church-on-the-Bowery, pressing on for a rally at Union Square before ending the day in Washington Heights at the northern tip of Manhattan.

“This is important to all New Yorkers of any faith. It is the remnants of racism that keep this problem alive,” state Sen. Adriano Espaillat, D-Upper Manhattan, said on steps of City Hall.

Farmworkers are excluded from basic rights and protections that workers in almost every other industry have, an exclusion that lawmakers in the South demanded before they’d agree to the passage of President Franklin Roosevelt’s National Labor Relations Act in 1935 and Fair Labor Standards Act in 1938. Domestic workers were excluded also, but that changed in 2010, when the Domestic Workers’ Bill of Rights passed in New York.

Farmworkers are still excluded. Grocery shoppers plucking a few glossy red Gala apples at their local market are enjoying the labor of people hidden at the bottom of the state’s $5.4 billion agricultural industry on 35,500 farms, according to a 2012 U.S. Department of Agriculture census.

Heriberto, 26, is one of those workers. Originally from Morelos, Mexico, he worked for minimum wage for about 80 hours a week, with no day off for more than four years on a Hudson Valley farm, tilling zucchini, peppers, onions, potatoes and watermelons.

“I would like to see change. I don’t know why farmworkers don’t have rights like other workers,” Heriberto, whose last name is withheld because of his immigration status, said as he marched with the crowd. “It’s not a privilege. It’s a necessity.”

He’s seen coworkers get injured on the job, be unable to work, and lose their jobs.  Heriberto operates a tractor and forklift, yet is paid as an unskilled laborer. Things have improved in his seven years in the United States, however, he said. About two years ago, he was able to bargain for a pay raise and weekends off, so he’s one of the few farmworkers who could participate in the march. 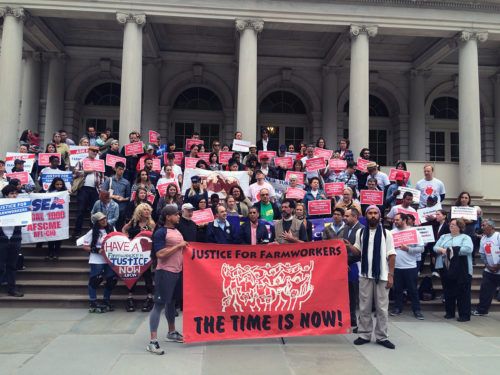 Most of the marchers don’t have this kind of field experience. Celia Baldwin was sitting in her pew at Grace Episcopal Church in Hastings on Hudson about nine years ago, when she heard Witt speak about the Rural & Migrant Ministry. Baldwin is a grade school teacher and not a “serial activist,” she said, but she was deeply moved to help once she was aware how bad the working conditions are for the people who grow her food.

“This organization represents a slice of American life that can only speak through others, and they feed all of us,” Baldwin said as she marched. “Why did I get involved? I eat. No one can tell you it doesn’t relate to them.”

The bill they are rallying for would provide farmworkers with overtime pay, an optional day of rest, and the right to collectively bargain. 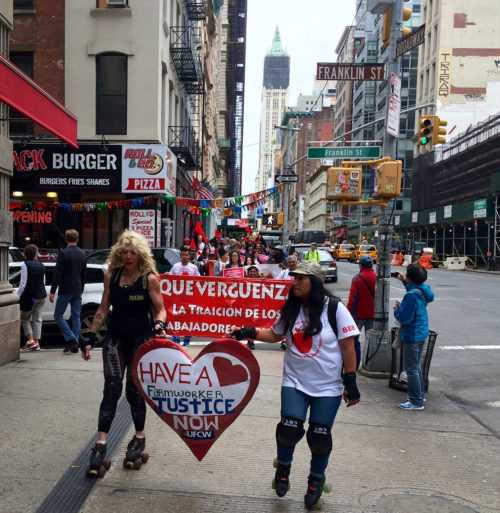 Marchers for farmworker justice paraded, chanted, and passed out flyers through lower Manhattan on May 21 during the March for Farmworker Justice event. Photo: Amy Sowder

Slowly, working conditions for New York’s field hands have improved. In the 1990s, the state legislature mandated that farms with at least five employees provide clean water and bathrooms in the fields. About 16 years ago, the minimum wage for farmworkers was raised to the same level as the state minimum wage most other workers receive.

And after a statement from New York Gov. Andrew Cuomo earlier this month, the right to collective bargaining looks more likely. The New York Civil Liberties Union filed a lawsuit against the governor and state of New York, charging that excluding farmworkers from the right to collective bargaining violates the state constitution. On May 10, Cuomo agreed. Neither Cuomo nor the state attorney would fight the lawsuit.

“We will not tolerate the abuse or exploitation of workers in any industry,” Cuomo said. “This clear and undeniable injustice must be corrected.”

The New York Farm Bureau, the lobbying organization for agribusiness, is the primary opponent to this bill. The bureau states that giving farmworkers overtime pay – time and a half for every hour over eight hours in a day – would sink small farmers who can’t afford it and are struggling already. The average New York farm earns about $34,300 annually in net cash, according to the 2012 USDA census.

“It’s all turned into an economic issue,” Witt said. “The Farm Bureau would argue that farmworkers are already regulated enough, and they are regulated enough, but it’s not about that. It’s about equality for all workers. What is it about agriculture that gives it a different moral structure than any other business?” 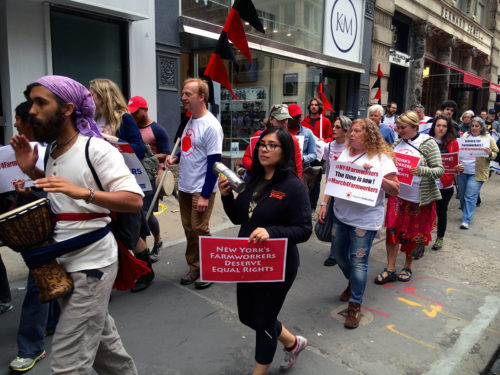 Laura Garcia, 30, (center, dressed in black) shakes a can noisemaker and holds a sign as she marches a few blocks south of Manhattan’s SoHo district on Day 7 of the 18-day Farmworkers March for Justice event. As a child of a farmworker, Garcia benefitted from Rural & Migrant Ministry programs for children that exposed her to opportunities beyond her experience and gave her hope for a brighter future. Today, she’s a racial justice 1. program manager for the YWCA. Photo: Amy Sowder

Tom Toigo of Ronnybrook Dairy Farm in Ancramdale, New York, was selling recyclable bottles of milk at the Union Square Greenmarket when a woman from the marching group tried to hand him a flyer, and he yelled at her to go away. She scurried away while Toigo glared at her.

“Most of these farms aren’t big corporate farms. They’re family farms, and they’ll go out of business,” said Toigo, his voice calming as he returned to helping customers. “My problem with overtime is not about exploiting people. It’s about the seasonality of the work. It’s the nature of the farming industry.”

Just because farmers need employees to work more hours during peak season doesn’t mean they shouldn’t pay them overtime wages or stagger their workers’ shifts, according to RMM. It’s an issue of human rights, Witt said, and so did Cardinal Timothy Dolan, the Roman Catholic archbishop of New York, after he marched over the bridge with the group and spoke at the press conference.

“It’s a no-brainer,” Dolan told the crowd. “It’s about basic human rights, giving farmworkers a bit of dignity and respect.”

Vice president of the RMM board, the Rev. Melissa DeRosia, pastor of Gates Presbyterian Church in the heavily agricultural area of Rochester, New York, held onto the left side of a giant banner during the march.

“This is about more than immigration or food justice,” she said. “It’s about the interconnectivity of it all and how it lands on our plate.”

– Amy Sowder is a food writer based in Brooklyn, New York.