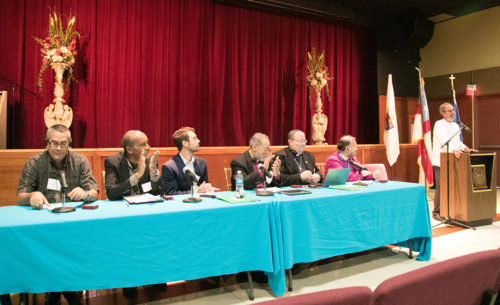 [Episcopal News Service – Ponce, Puerto Rico] What does it mean to do God’s mission with a world in continuous motion? That was the theme set forth by the 21st annual Global Episcopal Mission Conference held last week in Puerto Rico.

As U.S. citizens, Puerto Ricans have long made the journey north, but the Caribbean island’s decade-long economic crisis has accelerated that movement, particularly in 2014 when a record 84,000 people – an average of 240 a day – left. Today more Puerto Ricans live in the United States than on the island.

It’s a phenomenon that affects Puerto Ricans at all levels of society, said the Rev. Angel Rivera, a priest of the Diocese of Puerto Rico and a member of the GEMN board, during a May 20 panel discussion focused on “mission amid migration.”

As Rivera and other panelists maintained, the churches have witnessed the effect of migration on families and communities.

Be they economic migrants looking for work or refugees and asylum seekers fleeing violence, war in their countries or natural disasters, record numbers of people are on the move today. About 244 million people – equal to three-quarters of the U.S. population – live outside their birth countries, a figure that includes 20 million refugees and 59.9 million internally displaced people, a record number.

In Colombia alone, more than 7,000,000 people have been internally displaced by an armed conflict fought largely over control of land in the South American country. Another 350,000 have become refugees.

In the meantime, the church has responded to meet people’s needs at the local level and in neighboring countries, like Ecuador, that have accepted refugees.

Bishop Julio Holguín, of the Diocese of the Dominican Republic, explained the situation in his country where Dominicans of Haitian descent have been stripped of citizenship, thus rendering them stateless. Noah Bullock, executive director of Foundation Cristosal, described the ongoing violence fueled by gangs in El Salvador and neighboring Guatemala and Honduras, a crisis that has led people to flee Central America’s northern triangle, either for the United States or regionally. In 2015, 17,5000 people suffered violent deaths in El Salvador, and an estimated 500,000 were internally displaced by violence. Jose Bringas Lisare of the Diocese of Cuba described the island’s most recent wave of outward migration, as record numbers are fleeing the island in fear of an end of the Cuban Adjustment Act that has favored Cuban immigrants since 1966.

Cuba’s modernization of its economy based on “private property ownership and cooperatives,” has excited some and terrified others, said Bringas, adding that Cubans still believe in the “American Dream,” and that leaving Cuba for the United States “will solve their problems,” when that’s not the case. The Episcopal Church of Cuba, he said, is working to help people improve their lives at the community level, in hopes that they will decide to stay and make a life in Cuba.

More than 120 Episcopalians – including 20 young adult and adult missionaries – gathered at the Interamerican University of Puerto Rico at Ponce for the May 18-20 conference. In addition to networking, the annual conference provides workshops on educating and empowering them in their mission work and an opportunity to worship together.

As was made clear during the last day’s panel, migration – which is really a catch-all term used to label people on the move – has worldwide impact. The Episcopal Church is responding in various ways to address the needs of migrants, refugee and asylum seekers.

In Seattle, Washington, for instance, the Mission to Seafarers provides support to merchant seafarers, many of whom spend nine to 12 months a year aboard cargo ships, moving goods around the world. These men, said Ken Hawkins, executive director of the Seattle Seafarers Center, often do not have the visas required to leave the ships docked in port. Through a network of more than 400 volunteers and chaplains, the mission provides support, in terms of phone cards and access to the Internet, and through emotional and spiritual counseling to seafarers.

The Syrian refugee crisis has led to a greater awareness of the large number of refugees fleeing war, violence and persecution; it’s a crisis that has led to fear and panic, both in Western Europe and the United States. In Europe, the church has responded by providing direct assistance to refugees living in camps in France, and Episcopal Relief & Development is providing assistance to partners in the Middle East.

In addition to working with 30 resettlement affiliates in 26 dioceses, providing direct assistance to recent arrivals, Episcopal Migration Ministries offers ways for congregations to engage in refugee resettlement in their communities, it also encourages Episcopalians to join the Episcopal Public Policy Network and advocate for policies that protect the rights of refugees and asylum seekers.

Over the past year, partially in response to the fear generated by the large number of Syrian refugees, 48 states have introduced legislation to either ban refugees from their states or to weaken the U.S. government’s resettlement program.

One of the key ways Episcopalians can become engaged in the issues of migration and refugee resettlement, Johnson said during the plenary, is through participation in the democratic process.

Of the 20 million refugees worldwide, less than 1 percent will be resettled; moreover, the United States resettles more refugees and any other country in the world. The church’s response is not just rooted in welcoming the stranger, but in the Baptismal Covenant.

Last week, the Episcopal Public Policy Network released an Election Engagement Toolkit offers ways for congregations and individuals participate in the electoral process “faithfully, responsibly and legally.” The toolkit anchors such engagement in the Baptismal Covenant’s promise to “strive for justice and peace and respect the dignity of every human being.”

⎯ Lynette Wilson is an editor/reporter for Episcopal News Service.