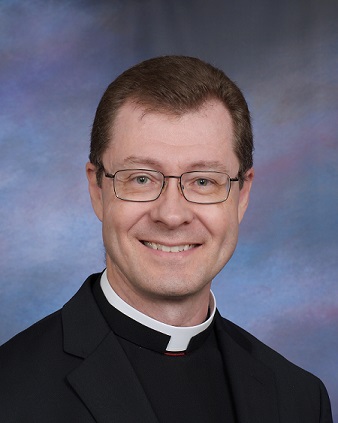 Since September 2013, Stevenson has served as the Episcopal Church Domestic Poverty Missioner, responsible for encouraging poverty ministry efforts aimed at systemic change and overseeing Jubilee Ministries, with nearly 700 ministries that focus on the economically impoverished.  He has also worked to develop partnerships and extensive networking with many Episcopal Church organizations, including Episcopal Relief & Development.

“Mark Stevenson is a demonstrated leader, an able and effective administrator and a faithful and compassionate priest, deeply committed to living the way of Jesus and to advancing his movement in the world, especially through service to and witness on behalf of the poor, the disposed, and the disinherited,” Presiding Bishop Curry said. “In this he joins with the remarkable staff of Episcopal Migration Ministries as they work to resettle our brothers and sisters who find themselves refugees a long way from home, like Mary, Joseph and the infant Jesus” (Matthew 1:13-15).

Episcopal Migration Ministries is the refugee resettlement program of the Episcopal Church. Each year the Episcopal Church works in partnership with its 30 member local affiliate network in 26 states, along with dioceses, faith communities and volunteers, to welcome refugees from conflict zones across the globe. This year, Episcopal Migration Ministries will welcome more than 5,000 refugees to the United States from 32 countries, from places like the Democratic Republic of Congo, Burma, Afghanistan, and Syria.

As director, Stevenson will provide leadership with a dedicated, experienced team in implementing Episcopal Migration Ministries’ national program of refugee resettlement as mandated by federal requirements, as well as any initiatives stemming from General Convention and Executive Council pertaining to refugee and immigration issues. Episcopal Migration Ministries carries out a national program of refugee resettlement through a public/private partnership with the US government, holding contracts with both the Department of State, Bureau for Population, Refugees, and Migration; and the Department of Health and Human Services, Office of Refugee Resettlement.

“The work of Episcopal Migration Ministries is an important element of our overall work as a Church, as we do justice, love kindness, and walk humbly with our God,” Stevenson said. “In my ministry over the years, I have witnessed injustice – and the struggles that come from it – attempt to strip away the dignity that God grants to each of us at our creation. As with the related issues of economic poverty ministry, the work of welcoming the stranger can bring systemic, transformative change to our world. I am looking forward to my new ministry alongside the professional staff of Episcopal Migration Ministries, its affiliates and partners, as the Church lives into this calling.”

Stevenson boasts extensive managerial and administrative experience, both within the Episcopal Church and in his previous secular employment.

Prior, Stevenson served as Canon to the Ordinary in the Diocese of Louisiana beginning in August 2005 where his responsibilities included oversight of the bishop’s staff, budget management, coordination of clergy and congregation transitional ministry, and various pastoral and administrative concerns throughout the diocese.   When Hurricane Katrina made landfall just days before Stevenson took his post, the scope of his ministry expanded dramatically to include working closely with then-Bishop Charles Jenkins, as well as local, regional, national and international leaders and groups to put into place the processes for effective relief ministry.   In partnership with Episcopal Relief & Development, the diocese instituted an Office of Disaster Response that evolved over the years into Episcopal Community Services of Louisiana, a ministry focused not only on immediate disaster relief but also on the transformation of lives by building a community of care and respect for all human beings.

Stevenson serves as vice-president of the board of The Living Church Foundation and has been a board member of Episcopal Relief & Development since 2012.

Stevenson can be reached at mstevenson@episcopalchurch.org

Stevenson replaces Deborah Stein, who resigned her position on May 6.