In its largest gathering ever, more than 120 Episcopalians – including 20 young adult and adult missionaries – are gathered at the Interamerican University of Puerto Rico at Ponce for May 18-20 conference. In addition to networking, the annual conference provides an opportunity for participants to attend workshops geared toward educating and empowering them in their mission work and to worship together.

“I do thank God for you, both for GEMN and those that serve as missioners and missionaries on behalf of the Episcopal Church in the context of our global community,” said Curry, at the start of his address. “The truth is that what you do and what we do matters, and how we do it matters. It matters significantly, temporally and eternally. It matters.”

The largest, independent mission network in the Episcopal Church, GEMN consists of dioceses, churches, organizations and individuals committed to global mission engagement and connecting people through mission. In addition to mission conferences, GEMN provides training and education and resources for mission. 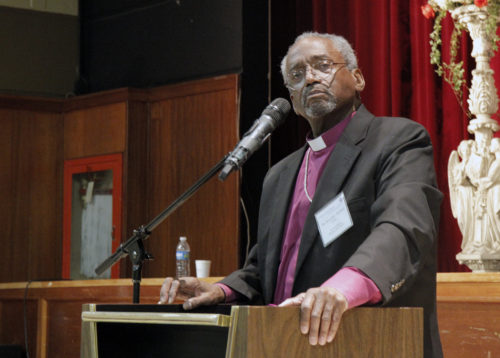 Curry’s reference to what the church does and how it does in the context of mission spoke to one of the biggest challenges the mission network is faced with: “promoting partnerships, accompaniment and reciprocal relationships, and trying to undo the post-colonial model [approach to mission],” said Karen Hotte, GEMN’s executive director.

“What does mission look like today given the lessons learned from the past,” she added.

The presiding bishop, in an afternoon question-and-answer session, talked about how the church’s approach to mission has changed, and how today’s approach resembles a more ancient approach.

Since his consecration in November 2015, the presiding bishop has consistently spoken about the Jesus Movement and its two components – evangelism and reconciliation – and what it means for Episcopalians and the Episcopal Church to be a part of that movement.

“The Anglican way of being Christian has its origin in the way of Jesus, in the movement of Jesus, that is who we are, as Anglicans, as Episcopalians, as Christian.” said Curry in his keynote address. “We are the Jesus Movement, and when we reclaim that, oh stay with me, church, when we reclaim that, we will find ourselves in the midst of a great revolution.”

But to be part of the movement also means that Episcopalians need to know Jesus of Nazareth.

There’s a difference between Jesus of Nazareth, the man described in the New Testament, more specifically in the Gospels, and Jesus portrayed in modern Christian culture, he said.

“When life is reoriented around Jesus of Nazareth, what the brother really taught, not just what the culture said he taught …,” said Curry. “This Jesus is a game changer who can show us the way away from the nightmare and into something close to God’s dream for all of us.”

“This Jesus Movement is about some Jesus people emerging, people who actually look and sound and talk and walk like Jesus,” he said. 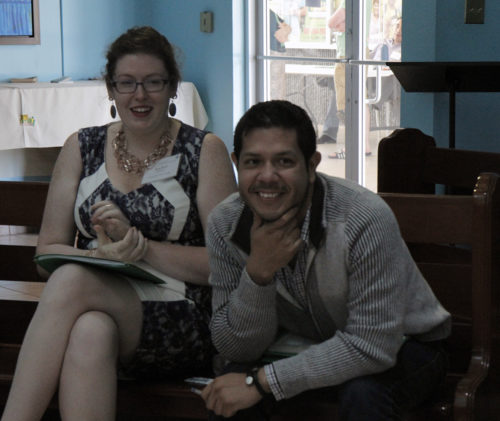 Following the presiding bishop’s keynote address, participants gathered in small groups to reflect on his message, and to formulate questions regarding Episcopalians’ and the church’s role in bringing about God’s mission in the world.

In an afternoon question-and-answer session that followed, the Rev. Titus Presler, who has long served Edwardes College in Peshawar, Pakistan, asked the presiding bishop some of the small groups’ questions.

The first question focused on how to talk about Jesus without “turning people off” and whether it was simply okay to talk about the Christian way of life rather than specifically about Jesus.

Curry’s answer: Yes, Jesus has to be part of the conversation.

The question brought him back to the difference between Jesus of Nazareth and the cultural Jesus.

“The Jesus of the Gospels, not matter how you cut it, defines love as the core, the center, it is the be all and the end all, it is the beginning and the end, the way of love of God and love of neighbor, is the sum total of the entire spiritual and religious enterprise” he said adding that that is not what the cultural Christ is depicted as.

The message of Jesus, he said, came be found in the parables of the prodigal son and of the sheep and goats as well as in the Sermon on the Mount.

“That Jesus consistently calls us to a higher self and is a consistent challenge to our way of being … that Jesus is very often not simply ‘Good News’ but often ‘new news’ cause I’m not sure that that Jesus is really known, and because that Jesus isn’t really known, not really grasped and known, for us not to mention him is for him not to be in the conversation at all…

“I really do believe that this Jesus of Nazareth is compelling, not for our purposes of manipulating anybody, but for our authenticity of being who we are.”