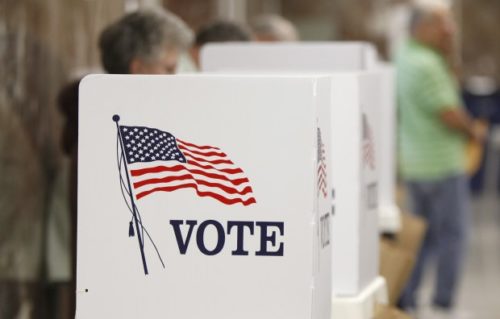 Voting is only one way that Episcopalians can be involved in the electoral process. Photo: everylibrary.org

[Episcopal News Service] Google the phrase “religion and politics” and in .52 seconds the search engine will suggest at least 140,000,000 internet entries.

Obviously, the mixture of the two strikes many a nerve and none more so than during a presidential election year.

Faith communities often grapple with whether and how deeply to be involved in the political cycle. In addition to those theological- and congregational-culture questions, they wonder and worry about the seemingly complicated rules of the Internal Revenue Service governing that involvement.

To that end, the Episcopal Church’s Episcopal Public Policy Network on May 18 released an Election Engagement Toolkit that calls itself an introduction for congregations that are eager to participate in the electoral process “faithfully, responsibly and legally.” The toolkit anchors such engagement in the Baptismal Covenant’s promise to “strive for justice and peace and respect the dignity of every human being.”

It suggests that conversations on public policy issues, candidate forums, voter registration and issue education campaigns, engagement with young adults who are eligible to vote for the first time, Get Out The Vote campaigns and advocacy for voting rights legislation are particularly appropriate activities.

“Engaging in elections is one way we can live out our call to care for our neighbors as ourselves,” said Lacy Broemel, Episcopal Church Office of Government Relations manager for communications and operations. “Election engagement goes beyond simply casting a ballot, but includes engaging in civil discourse and protecting voting rights.”

During a PBS NewsHour interview that aired May 17, Presiding Bishop Michael Curry told Judy Woodruff that political engagement by Christians was crucial.

Sometimes people of faith say that the church should not be involved in politics but the Rev. Leah Sandwell-Weiss, a deacon at St. Philip’s in the Hills Episcopal Church in Tucson, Arizona, tells them this: “Political is what Jesus was involved with. Let’s face it: everything he did, in a way, had a political repercussion to it.”

She adds that it is important to understand that “political is different than partisan” and that “if we don’t say anything, that’s political too.”

The Rev. Ed Bacon, who recently retired as rector of All Saints Church in Pasadena, California, has put it this way: “Faith in action is called politics. Spirituality without action is fruitless, and social action without spirituality is heartless. We are boldly political without being partisan. Having a partisan-free place to stand liberates the religious patriot to see clearly, speak courageously and act daringly.”

EPPN’s toolkit urges congregations to begin with conversations to discern just how to be engaged and “where your strengths could make the most impact.”

Such discernment is crucial, say leaders of congregations for whom such engagement is seen as a vocation to which the Holy Spirit and tradition call them.

For example, the Rev. Martini Shaw, rector of the African Episcopal Church of St. Thomas in Philadelphia, says the congregation’s tradition of political engagement is specific both to its history in that city and to the historic part that churches have played in black communities.

St. Thomas “has always been at the forefront of the community” in terms of social issues and during elections, Shaw said, adding that that position has increased during his 12 years at the church.

In the past, black pastors often were among the most educated people in their communities, Shaw noted, and during slavery and in the Jim Crow era churches were the only places where black people could legally congregate. Those conditions have translated into the common practice of politicians visiting black congregations on Sundays during the campaign season.

When Hillary Clinton was looking to visit black churches in Philadelphia on April 24, the Sunday before the Pennsylvania primary election, she approached St. Thomas and Triumph Baptist Church. When Shaw introduced her, he called her a former first lady and former secretary of state, not a presidential candidate. Of course, said Shaw, Clinton mentioned that she was running for president.

“The interesting thing is Bernie Sanders wanted to come on that same Sunday,” he said, “but we pretty much told him that Hillary was committed to coming and it probably wouldn’t be a good idea” because of the timing.

If Donald Trump, the presumptive Republican nominee, asks to come to St. Thomas between now and the Nov. 8 election, “I would certainly welcome him,” Shaw said.

Welcoming candidates is part of Shaw’s goal of educating members about the political process and the issues in any given election cycle. St. Thomas is also concerned about getting people registered to vote, prepared to go to the polls with the right documents and helping people get to their polling places on Election Day.

If St. Thomas lives out of the political engagement traditions of the black church, then All Saints Church in Pasadena, epitomizes a different model anchored in discerning a call to what the Rev. Susan Russell, senior associate at the parish, calls “living on the prophetic edge.”

All Saints has for decades been in the forefront of social justice issues. In the 1940s the Rev. John Scott, the parish’s fourth rector, went to Union Station in Los Angeles to protest deportation of Japanese Americans to internment camps. Two decades later, the Rev. John Burt, Scott’s successor, received death threats after he stood with Martin Luther King and helped organize huge civil rights rallies in the area.

The Rev. George Regas, Burt’s successor, adamantly opposed the Vietnam War, causing a large split in the congregation with his 1971 sermon “Mr. President, the Jury Is In.” In October 2004 the now-retired Regas preached a sermon at All Saints that the Internal Revenue Service initially said constituted intervention in the 2004 presidential election. The IRS opened a two-year investigation into the parish that concluded in September 2007 without challenging the parish’s tax-exempt status and without a threatened audit ever taking place.

“But none of those [actions] are about candidates,” Russell said. “While the DNA of All Saints has been deeply rooted in the social gospel through and within the political process, we have drawn the line at any involvement that was partisan.”

“We’re very clear that our challenge is on issues not parties,” she said.

The parish’s “foundational theological ethic” is that it is “deeply committed to being a prophetic voice in the public arena on issues that matter to the gospel and the way we do that is also by being fiercely nonpartisan.” During this election cycle, a vestry resolution on racial justice is guiding some of All Saints’ involvement in this election cycle, Russell said.

All Saints hosts educational forums on ballot initiatives and sometimes takes positions on those initiatives, according to Russell. It also has an “action table” set up at coffee hour that offers parishioners ways to make their voices heard on social justice issues, and provides voter registration and voter-rights information.

The parish has discerned its vocation and Russell said being Episcopal means that All Saints belongs to a “broad enough church” that allows both congregations and individuals to find their own vocations. And while some parishes, such as All Saints, see their vocation as living on that prophetic edge, “it is the vocation of others to live on the more contemplative edge of our tradition and that all of that falls within the bounds of our common faith and practice as Anglicans,” she said.

A congregation seeking to discern its vocation – or discern if it is being “called into a new place for a new reason” – needs to listen to the Holy Spirit and, Russell said, listen for “what are the issues that make your heart beat fast as a congregation.”

St. Philip’s in Tucson engages in the political and electoral processes on more than one level. It was a founding member of Pima County Interfaith Civic Education Organization, a nonprofit advocacy organization that takes action on issues that impact families and communities at the local and regional levels. The advocacy and education have included issues such as gun violence, immigration, environmental economics, education funding, Sandwell-Weiss said.

The group hopes that by providing information and helping people connect those issues to their faith, especially Jesus’ call in Matthew 25 to find him while caring for people on the margins of society, “hopefully it will make a more informed electorate and an electorate that will work to make some changes,” she said.

The church was also a local polling place for the state’s May 17 special election on two ballot propositions on education funding and change to its public employee pension system. An untold number of Episcopal congregations and institutions offer their facilities as polling stations.

The Episcopal Church of Bethesda-by-the-Sea in Palm Beach, Florida, has “all kinds of people in church and some are better known than others, and my hope is that we all find a place where we can come together to talk honestly and openly about things,”
said the Rev. James Harlan, the parish’s rector. Donald Trump is one of those people, having been married at the church in 2005.

Harlan, who has preached on campaign conduct and campaign rhetoric as well as how Christians can live beyond the winner-and-loser model, said another of his goals is that when people vote “they realize that their baptismal vows – to strive for justice and peace for all people, and respect the dignity of every human being – actually should influence the way they vote.”

Read more about it
The Episcopal Church’s Election Engagement Toolkit is here and the accompanying website is here.

The Pew Research Center for Religion & Public Life’s resource “Preaching Politics from the Pulpit” includes this question-and-answer section that unpacks the IRS rules.

The Nonprofit Vote website includes more resources on what churches legally can and cannot do during election season.