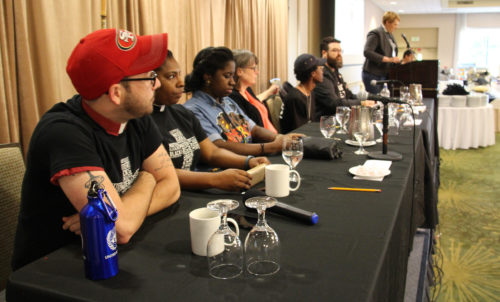 Young protesters from the Baltimore uprising share their experience and hope to the Diocese of Maryland convention. Delegates began the work of what reparations for the sin of racism and slavery to determine what that might look like. Photo: Diocese of Maryland

[Diocese of Maryland] At its recent convention, the Diocese of Maryland took the first of what could be many small steps to engage the issue of reparations and set aside money to help heal the centuries-old wounds of slavery.

Though the resolution that anchored the conversation, known as “Reparations Investment,” was referred to Diocesan Council for further review, its appearance marked a beginning for the diocese. The eight sponsoring white clergy wrote in their explanation that the measure gave the diocese a chance “to set an example for the church at large and other congregations whose endowed wealth is tied to the institution of slavery.”

The resolution (on page 20 here) called for the diocese to give “at least 10 percent of the assets of its unrestricted investment funds to the diocesan chapter of the Union of Black Episcopalians.” The final dollar amount could reach into the tens of thousands of dollars.

The Very Rev. Mike Kinman, dean of Christ Church Cathedral, St. Louis, Missouri, noted in his addresses to the convention that the church and nation were in a “kairos” time ripe for discomforting yet potentially healing conversation.

In the time since the Aug. 9, 2014, shooting of Michael Brown in Ferguson, Missouri, Kinman said he also has learned that “discomfort is a sacrament.” That shooting, those of Eric Garner, Tamir Rice and others, along with the death of Freddie Gray last year after his arrest by Baltimore police, have fueled protests and given birth to the “Black Lives Matter” movement. 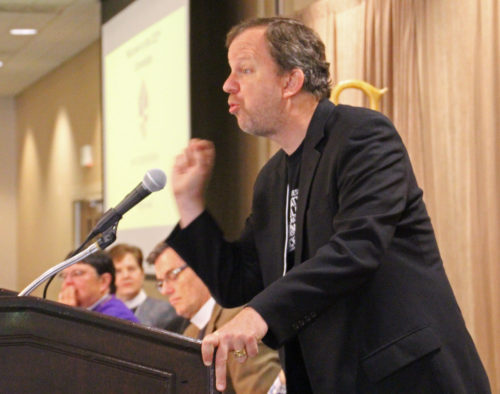 Yet, discomfort around race is at such a high level that merely to say “Black Lives Matter” or put a sign with the slogan on church property can elicit angry responses and vandalism. A “Black Lives Matter” sign put up at St. Phillip’s Episcopal Church, Annapolis, Maryland, has been repeatedly torn down. Police have made an arrest in the most recent incident.

Kinman used the healing of Bartimaeus to describe the evolution of his thinking as well as that of many others in the St. Louis area. In the story (told in Mark 10:46-52) Bartimaeus cries out for help and release from his pain and misery, in much the same way the African-American community did after Brown’s death.

Rather than acknowledge the pain, the crowd tries to shut down Bartimaeus. Jesus responds by putting Bartimaeus in the center of things and letting him speak. This is what has happened in St. Louis, Baltimore, and other cities where communities have responded to the police killings of young black men, said Kinman. Those who had been pushed to the margins now stand at the center, giving voice to their anger and dictating the agenda.

“I heard these voices and I found myself becoming profoundly uncomfortable,” said Kinman, who had to confront his own notions of “white privilege” and how it influences his actions. “There was nothing tranquil about what was happening. “

The conversations and listening sessions that have resulted are attempts at destroying what Kinman called “the greatest heresy: The lie of us and them. It is the greatest barrier to God’s dream of the beloved community.”

During one panel discussion at the convention, Baltimore protesters and some members of the Slate Project, a post-denominational Christian community, encouraged everyone to see Christ in new ways and to sit with the discomfort these new relationships may bring.

This will require sincere and open conversations, a theme Maryland Assistant Bishop Chilton R. Knudsen noted in her sermon that opened the convention. The power of true and meaningful engagement across race, class and gender lines was embedded in the Pentecost story where, she said, the Holy Spirit gave us the power to speak to each other and be understood.

Maryland Bishop Eugene Taylor Sutton underscored his call to confront the “unholy trinity” of poverty, racism and violence. “What would it be like if the Diocese of Maryland was known as a community of love?” he asked, challenging congregations and members to “encounter Christ and engage God in the world around us.”

— The Rev. M. Dion Thompson is a priest in the Diocese of Maryland.