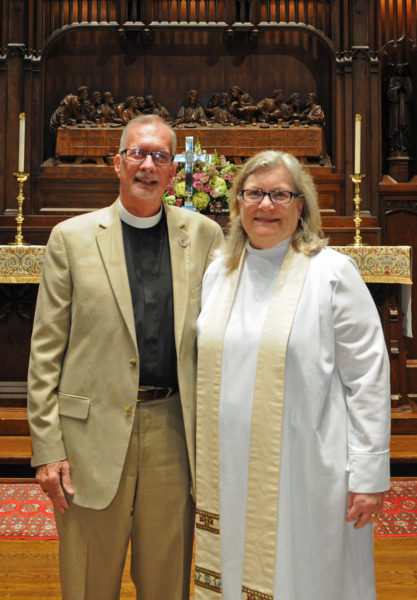 [House of Deputies press release] On May 1, the Rev. Robert Sessum, a ten-time deputy to General Convention from the Diocese of Lexington, was awarded the House of Deputies Medal by President Gay Clark Jennings during her visit to the Church of the Good Shepherd in Lexington.

“Bob has held an amazing array of leadership positions in the Episcopal Church and given thousands of hours of service over more than three decades,” said Jennings. “He has always been a steady hand on the wheel through stormy ecclesiastical seas. That’s true here in the Diocese of Lexington, it’s true in the province and churchwide, and it’s true in the Anglican Communion.”

Sessum, who was rector of the parish for nearly 17 years, served on the Executive Council of the Episcopal Church, as president of Province IV, on the Standing Commission on Anglican & International Peace with Justice Concerns, the Standing Committee on the Structure of the Church

During her visit, Jennings and Sessum presented a forum on the Anglican Consultative Council (ACC). Sessum was the Episcopal Church’s clergy member of the ACC from 1999-2005 and attended his final ACC meeting as a visitor because Episcopal Church representatives were not welcomed as voting members in the wake of the consecration of the Rt. Rev. Gene Robinson as bishop of New Hampshire. Jennings has been the Episcopal Church’s ACC clergy members since 2012 and recently returned from a meeting in Lusaka, Zambia, at which ACC members declined to enforce consequences against the Episcopal Church sought by the primates of the Anglican Communion in response to General Convention 2015’s adoption of marriage equality.

“All of us who have followed Bob in this work are grateful to him for representing the Episcopal Church so honorably to the rest of the Anglican Communion during his tenure on the ACC,” Jennings said.