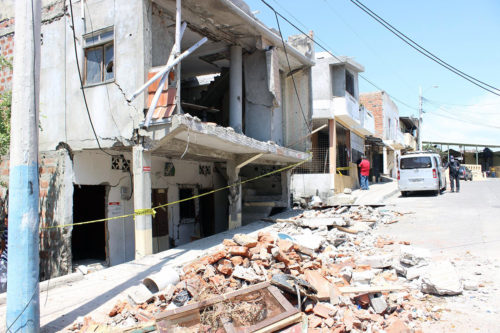 The Diocese of Ecuador Litoral has developed a comprehensive plan to care for the short- and long-term needs of people living in communities most affected by the April 16, 7-8-magnitude earthquake that hit the South American country. Photo: Edgar Giraldo/Facebook

[Episcopal News Service] Saturday, May 14 marks four weeks since the 7.8-magnitude earthquake struck Ecuador causing the death of more than 650 people, injuring more than 4,600 and displacing some 30,000. Recovery from the loss of life and the estimated $2 to $3 billion in damages will take years.

Over the past month, the Episcopal Diocese of Litoral, which serves the coastal area hardest hit, conducted a survey of the communities surrounding its churches in the hardest hit area, and has developed a comprehensive plan to care for the short- and long-term needs of people living in those communities; appointing parishioners to liaise with local government officials.

The diocese is preparing to provide “effective and efficient support” to victims based on the results of the survey, said Litoral Bishop Alfredo Morante-España, in an email message. Support, he added, that will require significant financial resources over the next two to three years.

In Manta, a central Pacific coastal community a three-and-a-half-hour drive north of Guayaquil, where the diocese has its headquarters, four churches, some of them incurring significant damage, have opened their doors to parishioners and community members. One recently ordained deacon shared his personal experience of loss in an interview for Episcopal News Services’ noticias section, where news is published in Spanish.

In the immediate aftermath of the May 16 earthquake, the diocese received support from Episcopal Relief & Development that has allowed it to provide food, clothing, first aid supplies, clean water, household items and emergency repair assistance to 300 families.

The Episcopal Church has two dioceses in Ecuador: Litoral, which covers the hard-hit coastal region; and the Quito-based Diocese of Ecuador Central, where the April 16 earthquake’s tremors were felt in the capital, Quito. Though, the capital didn’t incur damage one community belonging to the Diocese of Central Ecuador did incur damage and also has received support from Episcopal Relief & Development.

During a weekly telephone call convened to discuss the earthquake victims’ needs, participants from the Diocese of Litoral said many of the people they are serving live in communities not immediately reached by the national government’s aid and relief efforts.

In addition to support from Episcopal Relief & Development, the diocese has received support from individual Episcopalians, churches and dioceses, including the dioceses of Puerto Rico, New Jersey and Tennessee, among others. In the upcoming weeks, the Diocese of Puerto Rico, which operates a hospital system, will send a medical team to Manta; and a small group representing four churches in the Diocese of Tennessee will make a previously scheduled visit in early June, spending a few days in Guayaquil before heading north to Manta.

“We were shocked and saddened by the destruction caused by the recent earthquake in Ecuador,” said George Kurz, a member of St. Philip’s Episcopal Church in Donelson, Tennessee, a suburb of Nashville, and co-chair of the Committee for Continuing Work in the Diocese of Litoral.

“Some of our churches have had companion church relationships with churches in the hard-hit Manta area for 10-15 years,” he said, noting that just a couple of hours before the May 16 earthquake, St. Philip’s hosted a spaghetti dinner and silent auction fundraiser for a medical clinic members were scheduled to run in Ecuador in June.

“Hearing about the causalities and 30,000 people left homeless, we realized that our clinics would be inadequate for those major needs,” he said, adding that his group also discussed canceling the trip and sending the money for relief efforts rather than placing an additional load on the diocese.

“However, when we consulted Bishop Morante, he asked us still to come to be with our friends for companionship and spiritual support during this time of crisis,” said Kurz.

The bishop agreed with Kurz’s group that the clinics would not be practical this year, and rather than travel with a large group, 11 people representing four Episcopal churches will make the trip and hold two workshops focused on “the spirit of service” in regard to neighbors in a time of need.

“While we have service projects every year, we have found that once we arrive in Ecuador, the most important thing is to be open to direction from the Holy Spirit and try to respond as best we could,” he said.