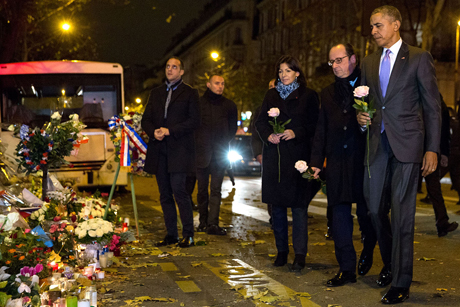 US President Barack Obama, in Paris for the COP21 UN climate change talks, at a make-shift memorial to the victims of the Bataclan theatre shootings with the City’s Mayor, Anne Hidalg; and the President of France, François Hollande. Photo: Pete Souza /The White House

[Anglican Communion News Service] It is six months since terrorists brought death and destruction to the streets of Paris – and just over six weeks since similar carnage was visited on Brussels. The bombings and shootings in France left 130 dead and 368 wounded. The three blasts in Belgium killed 35, including the bombers, and injured more than 300.

In the days that followed, there was a worldwide wave of sympathy, support and prayer. The Anglican Churches of St Michael’s in Paris and Holy Trinity in Brussels were at the heart of how their cities responded. So how are they and their congregations coping now?

Speaking at a recent conference of the Intercontinental Church Society (ICS), the Chaplain of St Michael’s, the Revd Canon Dr Alyson Lamb, said the danger was complacency.

“The problem is that the waters close over very quickly. There was an extraordinary outpouring of compassion at first,” she said. “Paris is a hard, flinty place – people don’t look at each other. But suddenly people were engaging, were looking at each other. But that disappeared quite quickly.”

She said compassion had moved into a phase of ecumenical collaboration which was seen even at some of the funerals of the victims. There were also city-wide prayer meetings and mission opportunities. But that spirit has also mostly disappeared.

In an interview with ACNS, Dr Lamb said that the state of high security in Paris had become the new normal; and danger of complacency about another attack was real.

“I think we would be crazy to imagine that it won’t happen again,” she said. “We must be armed – armed in the sense of prayer, which is our only weapon and confidence instead of complacency – confidence in the amazing gospel we have to proclaim . . . a belief that we are a church for such a time as this.

“We have to be armed with information about what is a happening in the world. We have to really engage . . . [and be] a church that preaches the gospel with the Bible in one hand, and the newspaper in the other.”

The attack in Paris last November had an immediate impact in Brussels. It soon emerged that the Belgian capital was home to the attackers and the city was put into lockdown.

The Senior Chaplain of Holy Trinity, the Revd Canon Dr Paul Vrolijk, told the ICS conference how soldiers were soon almost the only people outdoors – the only civilians on the streets that Sunday were people heading to church. But more people had attended services that day compared to normal.

“There was a great sense of being together as a church,” he said. “It was the only thing many people went to that weekend.”

Paul described how the Belgian government introduced what he called “quite extreme” security measures, for example, placing armed guards at schools and insisting that children were escorted in, individually, by soldiers.

“That had quite an impact – especially on my youngest child, who is five”, Dr Vrolijk recalled. “They didn’t do that in March – I think they realised it was too heavy . . . that it was what the terrorists wanted.”

One of Holy Trinity’s congregation was injured in the attack at Maalbeek metro station. Mark Beamish had just stepped off the train when a bomb was detonated in the middle carriage. He suffered shrapnel wound.

“The news moves on, people’s attention moves on – but there are still people living with what happened,” Dr Vrolijk said. “The tailback of these things will be very long.”

His colleague at Holy Trinity, Associate Chaplain, the Revd Canon John Wilkinson, told ACNS things were getting back to normal – in part.

“We still have the military on the streets and we find people are jumpy when they hear a helicopter going overhead or a siren in the streets. . . But people are working together to build community.”

Canon Wilkinson said the timing of the Brussels attack gave it an extra resonance.

“It happened in Holy Week . . . when we were preparing the Chrism Eucharist,” he said. “There was a real sense of something terrible has happened in the midst of us and yet Christ is risen. The Easter greeting was very, very powerful.”

Canon Wilkinson said the attacks in Paris and Brussels had also brought congregations together in an unexpected way.

“Both Holy Trinity Brussels and St Michael’s Paris are microcosms of the Anglican Communion. We have people from all over the world. Many of whom have suffered far greater horrors than we have suffered. . . Our congregation has many people from Rwanda and Burundi. . . I think we perhaps share in a tiny way . . . what our brothers and sisters throughout the world are experiencing on a daily basis. It humbles me to think that I have experienced it in such a tiny way and learned what it means to carry on in faith and trust in God.”