[Diocese of Eastern Michigan] This spring’s Happening youth event made a statement with the incorporation of water from around the world into their spiritual practice over the weekend of April 30-May.

Flint, one of the biggest cities in the Episcopal Diocese of Eastern Michigan, is in the midst of a crisis. A couple years ago, under leadership of an emergency manager, the water supply in Flint was switched from a Detroit source to one out of the Flint River. Mismanagement and improper treatment led to dangerous amounts of lead being leached from the pipes that carry the water into the homes of Flint residents. It wasn’t until just months ago that the state recognized the issue and Flint broke into national headlines.

To continue to keep the story of Flint in the hearts and minds of people throughout the church and in our communities, the “Happeners” asked other Happening communities around the globe if they would send in small bottles of water from their various natural sources.

Bottles came in from as close by as just up I-75 and as far away as Haiti and the Jordan River. 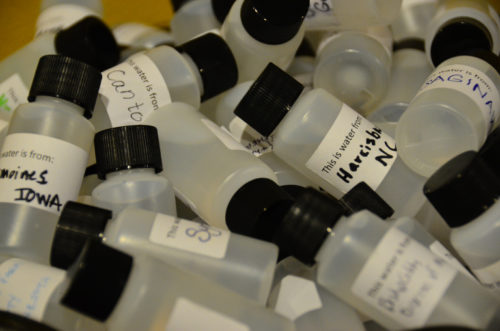 Bottles came in from around the world, from coast to coast and as far as the Jordan River and Haiti. Photo: Diocese of Eastern Michigan

On the opening day of the weekend, the waters were combined in a common bowl. The participants poured each bottle into bowl saying, “We are all your people, your creation. Let your love pour over us.”

After the waters were combined, the spiritual directors for the weekend, the Rev. Shirley Seely of Eastern Michigan and the Rev. Eric Williams of Michigan, blessed it as the holy water for the weekend, using it throughout various activities and liturgical practices. 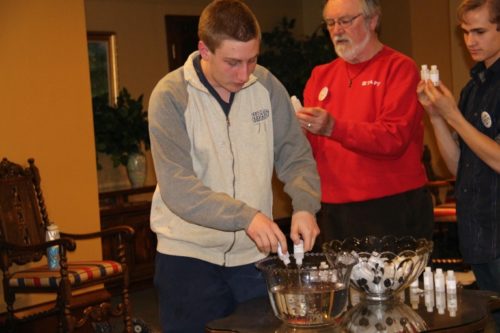 “My favorite thing we used it for,” explained the Happening rector, Margaret Williams, “was on Saturday night as we moved through the part of Happening that imitates a miniature Holy Week. During the Maundy Thursday-like foot washing service, we would dip our hands in the water and sprinkled it over everyone’s feet to symbolize our connection to the other Happening communities as everyone was praying for us and for the people of Flint throughout this process.” 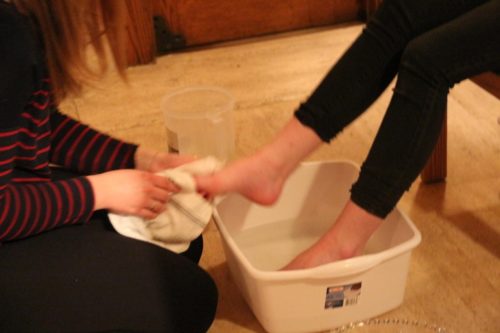 The Flint Water Crisis continues today with residents still yet unable to drink the water from their taps. Families exist on bottled water and are often dependent on external distribution sources. The vitamin-rich foods that aid in the removal of lead from the bloodstream are difficult to come by in many of Flint’s poorest neighborhoods. This generation of infants and children will be dealing with the effects of lead poisoning for their lifetime.

The Episcopal Diocese of Eastern Michigan, in partnership with Episcopal Relief and Development and the local parishes and organizations in Flint, have been providing water and healthy foods since October 2015.

Happening is a youth event for high-school-aged young people led by their peers. It occurs twice a year and is a shared ministry of the Dioceses of Michigan and Eastern Michigan. For more information about Happening, contact Facilitator of Youth and Young Adult Networks McKenzie Bade at mbade@eastmich.org.

— Katie Forsyth is the director of communications and public engagement in the Diocese of Eastern Michigan.