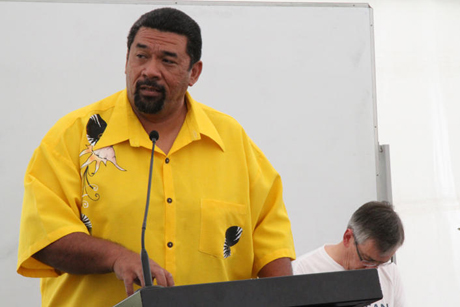 Fe’i Tevi calls on the church to move from sympathy to partnership in the General Synod of the Anglican Church of Aotearoa, New Zealand and Polynesia. Photo: Anglican Taonga

[Anglican Communion News Service] The Anglican Church of Aotearoa, New Zealand and Polynesia is to establish a “clear resilience strategy” to strengthen its response to future natural disasters in the Pacific islands. The move, adopted at the Province’s General Synod, came as researchers announced that five pacific islands have completely disappeared and a further six are experiencing “severe shoreline recession” as a result of rising sea levels.

Writing in the online Environmental Research Letters journal, scientists say that aerial and satellite photos taken between 1947 and 2014 of 33 Pacific islands show that “five vegetated reef islands . . . have vanished over this time period and a further six islands experiencing severe shoreline recession.”

They say that two villages that have existed since at least 1935 have been destroyed. “Rates of shoreline recession are substantially higher in areas exposed to high wave energy, indicating a synergistic interaction between sea-level rise and waves. Understanding these local factors that increase the susceptibility of islands to coastal erosion is critical to guide adaptation responses for these remote Pacific communities.”

This week, in a motion brought by Fe’iloakitau Kaho Tevi from the Diocese of Polynesia, the Province’s General Synod has resolved to devise a strategy to strengthen its response to natural disasters in the Pacific islands; including linking with other relief agencies and forming a cadre of “church community trainers” to teach parish youth groups about disaster preparedness.

Fe’i Tevi painted a bleaker picture than the scientists, telling the Synod that seven Pacific islands had been lost since the Paris climate change talks in December. “I want to tell you about Cyclones Winston and Pam, that members of this synod lived through, that my family and I lived through,” he said. “Imagine you are in a train station on the platform, a little way back from the edge of the platform. And a train goes through the station at 250km per hour.

“Imagine the force of that wind, the power of it passing by. The sound of that train to you is what Cyclones PAM sounded like. Except its winds reached 341km per hour. Thank God it was only six minutes of wind, if it had been ten, a lot more lives would have been lost.”

He told the synod that a more strategic and thought-through approach was needed to disaster response, saying that well-meaning offers of help aren’t always very helpful: “When a disaster happens, people act in sympathy they send second hand clothes, they send electrical kitchen appliances to places that don’t have electricity. They send high heels, to people who get them and don’t have anything to do with them.

“After the disaster in both Vanuatu and Fiji there was food past its use by date that came. These gifts sit in containers on wharves, and we are not too sure what to do with them. Sometimes we have to sell the clothes, to get some money for the things we need.”

Other responses had been more helpful. A priest from Christchurch – a city that had experienced its own disaster when 185 people died in an 2011 earthquake – sent a container “filled to the brim with building materials and second hands tools,” Fe’i Tevi said. “With that one container we were able to rebuild seven churches and also some vicarages.

“Perhaps we as the church need to shift from where we were at in terms of sympathy to towards partnership in action.”

The motion as agreed by the General Synod of Aotearoa, New Zealand and Polynesia