[Episcopal News Service] Two Anglican Communion leaders and some outgoing members of the Anglican Consultative Council are at odds about what exactly happened on the last full day of last month’s ACC-16 meeting in Lusaka, Zambia.

Archbishop of Canterbury Justin Welby has said that the council passed a resolution accepting the so-called “consequences” called for in January by a majority of the primates – leaders of the Anglican Communion’s 38 provinces – for the Episcopal Church’s decision to allow same-sex marriage. However, some ACC members dispute that interpretation.

The latest two chapters in the continuing disagreement opened May 6 when six outgoing ACC and Standing Committee members released a statement saying the council did not accept or endorse those consequences.  The statement also said that the ACC imposed no additional consequences.

“In receiving the Archbishop of Canterbury’s formal report of the Primates’ Gathering and Meeting, ACC16 neither endorsed nor affirmed the consequences contained in the Primates’ Communiqué. There was no plenary discussion or decision with respect to the Primates’ Communiqué,” the six members from the provinces of Australia, Brazil, Central Africa, England, the U.S.-based Episcopal Church and Wales said in the statement. “From our perspective there did not seem to be a common mind on the issue, other than the clear commitment to avoid further confrontation and division.”

Welby declined a request from Episcopal News Service to comment on the ACC members’ statement. However, during the evening of May 8, Bishop Josiah Idowu-Fearon, Anglican Communion secretary general, rejected the statement.

“They are entitled to express a view but I simply do not agree with their interpretation here,” he said in part. “The response of the ACC was clear and its support for the Primates was clearly expressed.”

The disagreement centers on the interpretation of a resolution the ACC passed with no debate on April 18, the last full day of the April 8-19 meeting. Then named C34 and now numbered Resolution 16.24 and titled “Walking Together,” the resolution says:

The key part of the primates’ communiqué, and of Welby’s report on it, are the so-called consequences the primates called for in response to the 78th General Convention’s decision to change canonical language that defines marriage as being between a man and a woman (Resolution A036) and to authorize two new marriage rites with language allowing them to be used by same-sex or opposite-sex couples (Resolution A054).

The primates said in the communiqué issued at the end of their January meeting that they were “requiring” that for three years the Episcopal Church not serve on ecumenical and interfaith bodies, not be appointed or elected to an internal standing committee, and that while participating in the Communion’s internal bodies, they could not be involved in decisions pertaining to doctrine or polity.

The resolution was one of 18 on a consent calendar that was passed without debate.

A related resolution, numbered C35, in which the ACC would have said it “welcomes” the primates’ communiqué, also had been on the consent calendar but was removed so that the council could discuss it. However, after discussions over lunch and as the April 18 afternoon session began, the movers said they wanted to withdraw C35 from consideration.

Such a request is normally not debatable but then-ACC vice chair Elizabeth Paver asked council members for their approval. Welby told the ACC that he would be “very glad” if C35 was withdrawn because C34 “covers the issues we need to cover.” With a show of hands, the members agreed to allow the motion to be withdrawn.

Action on the two resolutions was the second of only two times that the council formally considered the so-called consequences during the Lusaka meeting. The first came April 8 during Welby’s report.

He did not explicitly ask the council for its endorsement. “It is both my and the Primates’ desire, hope and prayer that the ACC should also share in working through the consequences of our impaired relationships,” he said in his one reference to potential council action.

When Welby finished, ACC members spent about 30 minutes discussing his report in their table groups. The groups did not report in plenary session on their conversations but a summary of the discussions was posted 10 days later, near the end of the meeting. It said a “desire to endorse the primates’ communiqué and the resolve to walk together” was one of five themes that emerged.

The summary cited only four comments as evidence of this desire, but each of the 10 table groups included ACC members who neither agreed with the primates’ call for consequences nor interpreted the ACC resolution as supporting them.

However, according to the ACNS article, Idowu-Fearon said that it was his understanding that feedback from those table discussions had been “overwhelmingly supportive” of the consequences.

The four comments were:

“To endorse all aspects of the Primates’ Communiqué as being supported by this ACC” – Table 2;

“Primates resolved that we walk together as a Communion” – Table 1;

“Sacrifices e.g. parents do to a disobedient child” – Table 4. 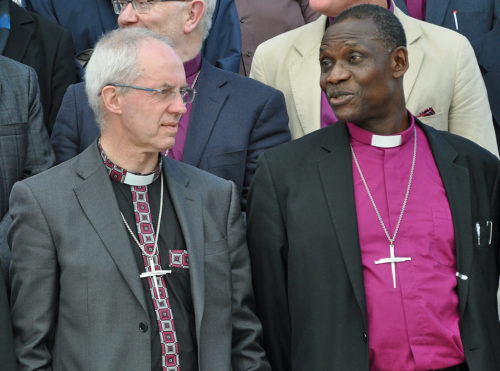 After the table discussions, time was allotted for “clarifying questions.” The only person who spoke was Sudanese Archbishop Deng Bul. He urged that “the communiqué be adopted by the ACC to keep the church of God together.” No action was taken that day and Deng later submitted what became Resolution 16.24.

At the end of the session in which Welby gave his report, Paver, one of the outgoing members who later signed the May 6 statement, told the council that he had posed a “direct request from the primates to us” and called on the ACC members to affirm their desire to walk with the primates through applause.

Scattered applause followed Paver’s request but not all members participated, some later saying they were confused about exactly what she was asking for.

During a closing news conference on the evening of April 18, Welby was asked if the “Walking Together” resolution meant that the ACC concurred with the primates’ call for consequences for the Episcopal Church. “Well, it received my report which included those consequences,” Welby replied. Prompted by the reporter as to whether the consequences “stand,” Welby replied that they did.

In fact, the ACC never discussed overriding the primates. And since that news conference Welby has twice gone on to insist that Resolution 16.24 means that the council supported the primates’ requirements.

As ACC members began departing Lusaka the next day, he was quoted in an Anglican Communion News Service story as saying: “Given that my report, referred to in the resolution, incorporated the communiqué and was very explicit on consequences; the resolution clearly supports and accepts all the Primates’ Meeting conclusions.”

Ten days later Welby issued a statement saying that the resolution’s passage meant that “the ACC accepted these consequences entirely, neither adding to nor subtracting from them.”

In both instances, Welby amplified his contention that the ACC had enforced the consequences with the fact that none of the group’s three Episcopal Church members stood for election on the Standing Committee or as chair or vice chair of the ACC.

Connecticut Bishop Ian Douglas, then one of three Episcopal Church’s members on ACC, was widely expected to stand for election as the council’s chair. He declined to do so, saying his decision was “not in response to the primates’ communiqué per se” but was due to his commitment to foster unity in the communion.

Complete ENS coverage of the ACC is here.

The House of Deputies News page also posted stories from the meeting.

— The Rev. Mary Frances Schjonberg are editors/reporters of the Episcopal News Service.