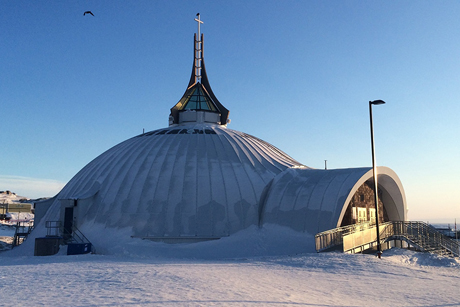 [Anglican Communion News Service] An Anglican seminary is to open in the Arctic as the Arthur Turner Training School (ATTS) re-opens, almost a decade after it closed. When it re-opens, the ATTS will operate from its new home at St Jude’s Cathedral in Iqaluit, thanks to a $50,000 Canadian (approximately $38,400 U.S.) return from the Anglican Church of Canada’s Resolution Corp.

“As you can probably imagine, it’s not cheap to do anything in the north,” the Rev.  Joseph Royal, director of ATTS and its primary teacher, said. “The costs of everything are high, so the [return] certainly does help.”

The money from the province will cover roughly one-third of the school’s operating budget for the year, and will be put towards helping up-front costs such as salaries, materials and supplies, travel, operations, and housing for students.

The ATTS first opened in 1970 in Pangnirtung, an Inuit community east of Iqaluit on the coast of Baffin Island. Royal described the goal of the school, then and now, as training and empowering Indigenous people, who make up the majority of the Arctic population, primarily for ordained ministry.

The school offers a two-year diploma program in Arctic ministry with a practicum between each year. Classes include introductions to the Old and New Testaments, Anglicanism, theology, church history, and worship.

Following a successful run in its original incarnation at Pangnirtung, the school was obliged to shut down operations in 2007 as its rapidly aging buildings proved unsuitable to host classes. The closure of the school followed the 2005 fire that destroyed the original St Jude’s Cathedral.

Its re-opening has long been a priority for the Anglican diocese of the Arctic; and with the opening of a replacement cathedral in 2012, at a cost of $11 million Canadian (approximately $8.4 million U.S.), the new St Jude’s offered a convenient location for the new ATTS.

The new location in Iqaluit offers many opportunities to students training for Arctic ministry, such as chaplaincy work at the local hospital, ministry at correctional facilities, and volunteering in the food center that runs out of the cathedral.

“We’re giving the students the best opportunity that we possibly can to sample different areas of ministry that are important in the north,” Bishop Suffragan of the Arctic, Darren McCartney, chair of the education committee, said.

Iqaluit’s multicultural nature is well suited to the bilingual school, which offers classes in both Inuktitut and English. Meanwhile, the city’s central location and status as a regional transportation hub allow lay leaders or clergy visiting the city to sit in on lectures.

With ATTS currently accepting applications, its proponents hope that the re-opening in September will create beneficial effects across the diocese.

“As a bishop, I traveled to the whole of the diocese and visit each of these communities, and that’s a question that we’ve continually been asked – ‘Can we get a minister? Can we get a clergy person? Can we get a priest?’” McCartney said. “So people are asking for it and we’re trying to respond to that need.”

Royal highlighted the parish model taught by the school, which emphasizes that ministry extends beyond those who attend church to the community as a whole.

“Ask people in a northern community, and they will tell you that ministers are first responders,” he said. “They are support people. They wear many hats, and their ministry is very, very broad in a community. So I think [the re-opening of the school will] have tremendous impact.

“It’s not just good for church-goers. It’s good for everybody.”