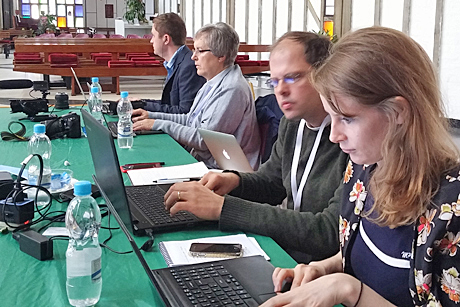 Journalists working at the recent ACC-16 meeting in the Cathedral of the Holy Cross in Lusaka, including from top Matthew Davies and Mary Frances Schjonberg of Episcopal News Service, Mark Michael of The Living Church and Madeleine Davies (no relation) of the Church Times. Photo Credit: Gavin Drake/Anglican Communion News Service

[Anglican Communion News Service] Churches across Britain are being asked to pray for the media this Sunday on what has become an annual call for a day of prayer for journalists and news organizations by the ecumenical charity, the Church and Media Network.

“The British media continues to be under scrutiny,” the charity says. “Illegal and unethical practices by some journalists have combined with tough economic times and pressures from new technology to make these challenging times for everyone working in the media. As Christians, we want to affirm the media’s vital role in our society.

“At its best the media gives a voice to the voiceless, holds the powerful to account, highlights unjust practices, calls for justice, keeps people informed, brings us strong opinions to challenge our own [and] tells stories to entertain us.

“We want to give our backing to the vast majority of people working in the media as they strive for integrity and truth.”

The Church and Media network says that working in the media is an “honorable profession,” adding: “We want to encourage Christians and other people of faith and goodwill to consider it as a calling. We want to support all those working with the media in our churches; church leaders and communications officers who help to portray and interpret the Church’s role in our society.”

The extent of the challenge facing British journalism can be seen by the closure of the national newspaper New Day. Launched by Trinity Mirror Group just weeks ago, the owners announced May 5 that the May 6 edition would be its last.

“From national newspapers to community radio, from websites to specialist publications, from TV networks to blogs, all have a valuable role to play,” the Church and Media Network say. “Churches are parts of international and national networks – so a thriving global and national media matters to us.

“We want to know about our world, its celebrations, its problems and its joys, and we need a thriving media to help us engage with it. Churches are communities of believers rooted in local areas. So the local and regional media matter to us – they are vital parts of our communities, and help to hold those communities together.

“In difficult economic and social times, we need a strong and courageous international, national and local media, working to the highest ethical standards. We want to play our part in ensuring that we have a thriving media, committed to truth, and in affirming – and challenging – those who work within it.”

The charity says that this year, they “especially want to pray for media professionals to be empowered to tell the whole story – the negative as well as the positive, the wrongs and the rights, the truth and the redemption”.

They will be praying for “increased opportunities to celebrate empathy, truth and justice in the media and for lives to be changed; enhanced respect and mutual understanding between Christian and non-Christian media professionals; and effective discipleship of young Christians who are looking to build a career in, or will be working with, the media.”

They have organized a social media “thunderclap” on Sunday and are asking supporters to sign up to automatically send a message to their followers announcing that they are praying for the media. They have also set up a Pray4Media group on the Instapray app.

The original idea for the day came from the Rev. Peter Crumpler, the curate of St Leonard’s Church in Sandridge, St Albans; who was the Church of England’s communications director before he left to become an ordinand.

He wrote one of several prayers for the day which can be found on the website pray4media.co.uk:

God who spoke the world into being and communicates with us still today;
We give you thanks for writers, producers, broadcasters and journalists, and all who work in the media. We thank you for their creative skills and technical abilities, and their persistence in seeking after truth.

We ask that they may have wisdom, integrity, insight and judgement in their work.
May they be a voice for the powerless, a challenge to the powerful; bringers of knowledge and clarity to an uncertain and confused world.

Help them to reach for the highest professional standards, especially when budgets are stretched, time is tight, and competition increasing.
May they resist the temptation to follow the consensus, jump to easy conclusions, pander to prejudice or cut corners.

Help us, who read, watch, listen and contribute to the media, to play our part by being wise and discerning, so that truth and beauty will be the hallmarks of our media.
We offer these prayers in the Name of the One who brought the Good News, declared himself as the Truth, and gave Himself for a world in need.