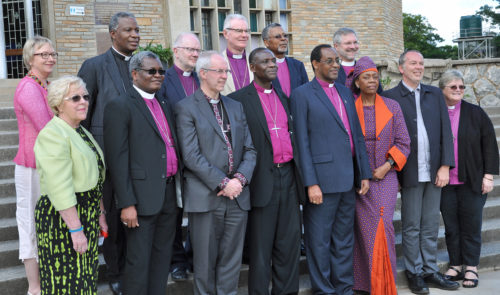 [Episcopal News Service] The six outgoing members of the Anglican Consultative Council and the Standing Committee on May 6 released the following statement about action taken on April 18 during the ACC-16 meeting in Lusaka, Zambia.

Walking Together: A Clarification
May 6, 2016

Since the enriching, empowering and constructive meeting of the Anglican
Consultative Council (ACC16) in Lusaka, 8 – 19 April 2016, a number of statements have appeared with respect to ACC16’s engagement with the outcome of the January 2016 Primates’ Gathering and Meeting.

As outgoing members of the Anglican Consultative Council and of the Standing Committee, we are writing to clarify our understanding of what transpired at ACC16 with respect to the earlier Primates’ gathering.

ACC16 approved a resolution “Walking Together,” as follows:

The Anglican Consultative Council
1. receives the formal report of the Archbishop of Canterbury to ACC16 on the Primates’ Gathering and Meeting of January 2016; and

2. affirms the commitment of the Primates of the Anglican Communion to walk together; and

3. commits to continue to seek appropriate ways for the Provinces of the Anglican Communion to walk together with each other and with the Primates and the other Instruments of Communion.

In receiving the Archbishop of Canterbury’s formal report of the Primates’ Gathering and Meeting, ACC16 neither endorsed nor affirmed the consequences contained in the Primates’ Communiqué. There was no plenary discussion or decision with respect to the Primates’ Communiqué. From our perspective there did not seem to be a common mind on the issue, other than the clear commitment to avoid further confrontation and division. ACC16 did welcome the call for the Instruments of Communion and the Provinces to continue to walk together as they discern the way forward. No consequences were imposed by the ACC and neither was the ACC asked to do so.

During the meeting there were many opportunities, both formal and informal, to explore the ACC16 theme of ‘Intentional discipleship in a world of differences.” This was done faithfully and respectfully.

As outgoing members of the Anglican Consultative Council and the Standing Committee, we remain passionate about the ACC’s distinct and independent role as one of the Instruments of Communion. The ACC provides a crucially important space for the sharing of our stories in God’s mission as laity, priests, deacons and bishops from the many and diverse contexts of the Provinces of the Anglican Communion. At ACC16 we truly witnessed the stated commitment to walking together in our life as the Body of Christ.