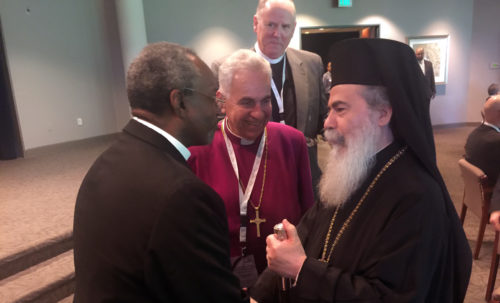 [Episcopal News Service] Episcopal Church Presiding Bishop Michael Curry joined more than 100 church leaders from the Middle East and the United States at the Carter Center last month for an unprecedented summit focused on seeking a lasting two-state solution for peace in the Holy Land and ending Israel’s occupation of Palestinian land.

“We honor the land that witnessed to the life and resurrection of our Lord Jesus Christ affirming his call to justice, peacemaking and to the ministry of justice and reconciliation,” the leaders said in a statement at the conclusion of their April 19-20 summit at the Atlanta-based center founded by former U.S. President Jimmy Carter and his wife Rosalynn.

Curry described the event as an “unprecedented summit … to look at how we can be a force for good” for Israelis and Palestinians “to find a way forward and to help our governments find a way forward for a just and lasting peace for all of the people of the Holy Land.”

Archbishop Suheil Dawani of the Episcopal Diocese of Jerusalem and Curry were among the Palestinian and American leaders representing all the major Christian churches in the Holy Land and the United States at the two-day summit, titled “Pursuing Peace and Strengthening Presence.” Dawani’s speech is here.

Curry said he was particularly struck by the words of the Mayor of Bethlehem Vera Baboun, a Palestinian Christian woman, who is trying “often against incredible odds to help Bethlehem truly be the city where Christ not only was born, but where the presence of Christ and the love of God is really known for all.”

For more than three decades the Carter Center – motivated by its motto of “waging peace, fighting disease, building hope” – has hosted landmark events committed to human rights and the alleviation of human suffering. The center also has offices in East Jerusalem, Ramallah and Gaza.

“We feel this is one of the most important meetings at the Carter Center this year,” said Carter, addressing the conference.

The religious leaders affirmed their belief that a two-state solution “in which both Israelis and Palestinians can live in neighborly relations and at peace with each other, must be viable politically, geographically, economically and socially.”

Following the Six-Day War in 1967, Israel has largely controlled East Jerusalem, the West Bank, Gaza, and the Golan Heights in what are collectively identified as the Israeli-occupied territories.

The leaders said in their statement that any two-state solution must be based on the pre-1967 borders and the cessation of Israeli settlement construction in the occupied territories.

“The continuing occupation of Palestinian lands beyond the 1967 borders and measures and laws that continue to constrain and control the Palestinian population, in contravention of the Universal Declaration on Human Rights, must end,” they said. “These actions prevent economic and social development, and constrain the exercise of political rights. We need to focus on bringing a new sense of equality, inclusivity, and mutual respect among all the citizens of the Land regardless of religious affiliation or ethnicity.”

Carter, who as U.S. president helped to broker the Camp David Accords in 1978 that formed a peace partnership between Israel and Egypt and returned control of the Sinai Peninsula, told the leaders that he fully agreed with this approach. “But it will not have any effect unless the churches and members here work on them jointly, enthusiastically and aggressively,” he said.

The Episcopal Church has long supported a two-state solution in which a secure and universally recognized state of Israel lives alongside a free, viable, and secure state for the Palestinian people, with a shared Jerusalem as the capital of both.

The Episcopal Church’s most recent stance on Israeli-Palestinian peacemaking was taken at General Convention in June 2015. Resolution B013 “reaffirms the vocation of the church as an agent of reconciliation and restorative justice,” and recognizes that “meaningful reconciliation can help to engender sustainable, long-lasting peace and that such reconciliation must incorporate both political action and locally driven grassroots efforts.”

Resolution C018 expresses solidarity with and support for Christians in Israel and the Israeli-occupied territories; affirms the work of the Episcopal Diocese of Jerusalem in healing, education, and pastoral care; and affirms the work of Christians engaged in relationship building, interfaith dialogue, nonviolence training, and advocacy for the rights of Palestinians. The resolution also urges Episcopalians to demonstrate their solidarity by making pilgrimage to Israel and the Israeli-occupied territories and learning from fellow Christians in the region.

In Atlanta, the religious leaders also encouraged Christians to make pilgrimages to the Holy Land to understand more deeply the history and nature of the conflict.

In addition to official Episcopal Church policy, several dioceses and networks also are engaged in Holy Land partnerships and advocacy, particularly in supporting the Episcopal Diocese of Jerusalem and its more than 30 social service institutions throughout Israel, Jordan, Lebanon, Syria and the Palestinian Territories. These institutions include schools, hospitals, clinics and centers for people with disabilities.

The diocese and the institutions also are supported by the American Friends of the Episcopal Diocese of Jerusalem, a nonpolitical, nonprofit organization established in 1985.

Dawani addressed the Atlanta conference on the goal of churches in interfaith dialogue. “As a community we seek to act justly and walk humbly with our God. We seek to promote justice for everyone,” he said. “We are not seeking privileges or protection for our own communities. That is a trap which has brought devastation to various religious communities in our region. Everyone loses when one group is privileged. Even the privileged group loses in the end.”

In crafting their policy and adopting their action statement, the leaders said their focus was on “the example and teachings of our Lord Jesus Christ on peacemaking [and] the dignity owed to all created in God’s image and kindling the hope that some day there will be a just and lasting peace in the Holy Land.”

Another source of major concern is the number of Christians who have left the Holy Land in search of better opportunities and more secure lives overseas.

“Churches and church-related organizations need to work together proactively to protect the existing and future presence of Palestinian Christians in the Holy Land,” the leaders said. “The current absence of a just political solution affects their presence and causes many of these Palestinian ‘living stones’ (Luke 19:40) to seek dignified life in freedom outside the troubled Holy Land. A just and peaceful solution is imperative and will contribute to protecting the presence and active participation and involvement of the Palestinian ‘living stones’ in the Holy Land and into a peaceful future.”

The full text and list of signatories is available here.