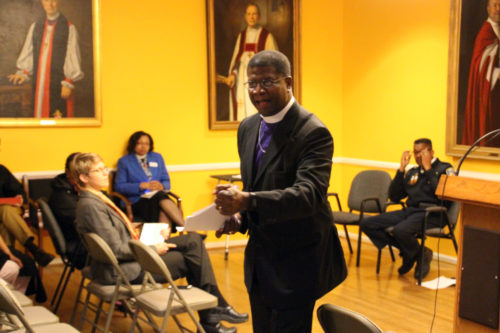 Bishop Eugene Taylor Sutton stresses social sins of poverty and racism that lead to violence in our cities. He urged those at the community forum to “encounter Christ” in their neighbors. Photo: Diocese of Maryland

[Diocese of Maryland] The chasm separating police and the communities they serve can be bridged, but it will take a determined effort led by people of faith.

That sentiment highlighted a forum organized by the Truth and Reconciliation Commission of the Episcopal Diocese of Maryland. “Building Bridges,” as it was called, brought together a wide range of police, religious and community leaders. The conversation was part of the diocese’s on-going response to the violent uprising that convulsed Baltimore last year after the death of Freddie Gray in police custody.

“I’ve never seen it as bad as it is today,” said Lt. Col. Melvin Russell, of the Baltimore City Police Department. “I see a collective collapse of the relationship between the police and the community.” 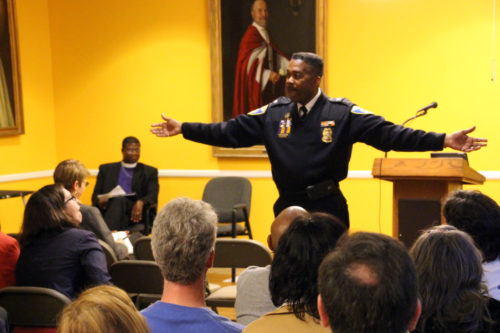 Russell, chief of the department’s Community Collaboration Division, brought a decades-long perspective to his statement. He started his career in 1979 and can remember when police officers were seen as an integral part of the communities they patrolled. They were often friends and neighbors, not enemies and outsiders, he said.

The resulting paradigm shift and rupture of the positive relationship between the police and the community is often echoed in the way churches interact with their neighborhoods.

“We’re not community churches anymore. We’re commuter churches,” said Russell, adding that one of his goals is “to bring the churches out of their four walls and back into the community.”

The Rt. Rev. Eugene Taylor Sutton, bishop of the Diocese of Maryland, challenged the overflow crowd attending the forum to engage with their neighbors, encounter the people in their communities, to pray and to organize.

“If we are not encountering Christ in our communities, then we are falling down on our responsibilities,” he said. “We can’t say we love our neighbors when we don’t even know our neighbors.”

Sutton also bemoaned what he called “the unholy trinity of racism, poverty and violence.” These factors are endemic throughout American society and constitute a social sin for which there must be a reckoning, he said.

“While we may not be participating, we allow a social sin to be done on our behalf,” said Sutton, adding that the country’s relationship with firearms amounts to a form of “idolatry.” “We have worshipped too long at the altar of the gun as the answer to our problems.” 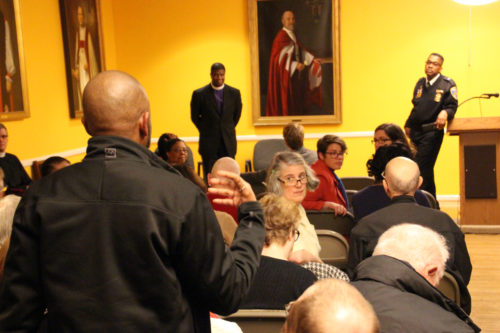 Merrick Moises questions Bishop Sutton and Lt. Col. Russell about his congregation’s relationship with police in northwest Baltimore at a community forum. Photo: Diocese of Maryland

The suffering and destruction caused by firearms is enormous. Sutton said more than 30,000 people are killed each year in America by guns and rifles, with another 80,000 injured.

Though the challenges seem daunting, Sutton and Russell mentioned several programs throughout the city aimed at improving relationships, providing opportunities and helping people cope with some of the stresses brought on by the “unholy trinity.” The diocese is launching a summer scholars program to teach life skills for 30 ninth graders at Morgan State University. The police department is expanding its chaplain program to help officers talk about their struggles in a confidential setting. More than 100 ex-offenders got jobs last year through a new prison-to-work program.

Merrick Moise, a parishioner at the Church of the Holy Nativity in northwest Baltimore, said he would like to have a local police officer attend his church once a month and see the neighborhood in a different setting. This would help improve the relationship between the police and the people they serve.

He also hoped those attending the forum would be inspired to turn the evening’s conversation into action. This desire was one aim of the event, said the Rev. Canon Angela F. Shepherd, commission chairman. She wanted people to be “motivated to go back to their churches to build a bridge with the police in their communities.

When they do, they will be challenged to live out the prayer with which Bishop Sutton ended the meeting: “Will you strive for justice and peace among all people, and respect the dignity of every human being?”

And the people responded: “I will, with God’s help.”