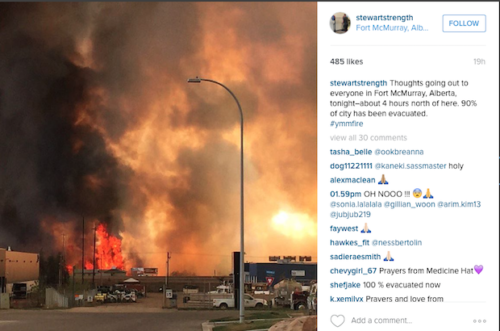 Many people in and around Fort McMurray have posted pictures on social media that capture the wildfires that forced 80,000 residents to evacuate. Photo: Instagram/stewartstrength via Anglican Journal

[Anglican Journal] As accounts of chaos and destruction emerge from firestorm-stricken Fort McMurray, Alberta, Anglicans across Canada are responding with help including financial aid, practical assistance and prayers.

“We’ve had offers of prayers and support from across the country,” Bishop Fraser Lawton, of the diocese of Athabasca, said  May 4. Parishes in the nearby towns of Lac la Biche, Athabasca and Boyle were all trying to reach out to evacuees and others affected by the disaster, he said.

The Primate’s World Relief and Development Fund (PWRDF) announced May 4 it would provide financial help, in as-yet unspecified amounts, to the dioceses of both Athabasca, in which Fort McMurray falls, and Edmonton, which has been offering assistance. It is also accepting donations toward relief efforts.

“PWRDF will respond through local Anglican channels as the needs become evident in the next few days,” PWRDF said in a prepared statement.

Also Wednesday, Archbishop Fred Hiltz, primate of the Anglican Church of Canada, sent out a call to prayer for the people of the stricken city.

“This is a terrifying time for the residents,” Hiltz said. “I think particularly of how stressful this is for those who are critically ill and those who tend them under these very difficult circumstances.”

May 3, authorities issued a mandatory evacuation order for Fort McMurray after a wildfire that had been burning to the southwest, fanned by growing winds, suddenly began to approach and then engulf the city. As of press time Wednesday, at least 1,600 homes and other buildings were reported to have been destroyed, with more destruction feared as the fire “searched” for more fuel in as-yet-untouched neighbourhoods.

“This fire will look for them,” Fort McMurray fire chief Darby Allen said at a news conference Wednesday, “and it will find them, and it will try to take them.”

As of press time, no deaths or serious injuries had been reported as a result of the fire.

Reached by the Anglican Journal on his cell phone on the road from the stricken city, Compton Vigilance, a parishioner of Fort McMurray’s All Saints Anglican Church, said he heard that, after he’d left, smoke alarms had gone off in his house in the city’s Abasand district. He suspected the fire had consumed it and the entire neighborhood.

“I’m 90% sure that where I live, Abasand, is probably totaled—it’s probably gone,” he said.

“When the adrenaline was flowing yesterday, I didn’t feel anything,” he said. “But this morning…after getting phone calls and texts, it hit us, and with that, we are so thankful that the Lord has given us the opportunity to still be able to serve him and also to help others.

Vigilance said he had been living in the city since 1979. 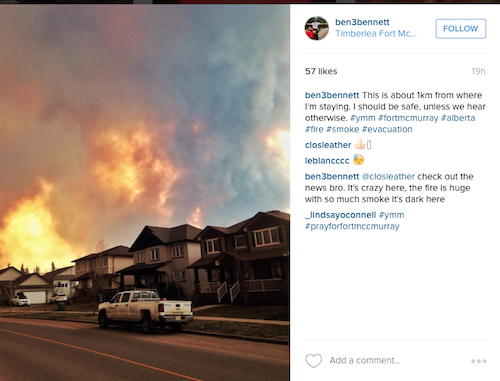 Several of Fort McMurray’s residential neighborhoods have been devastated by the fire. Photo: Instagram/ben3bennet via Anglican Journal

Gas shortages, gridlocked highways and the proximity of the fire itself to the southbound highway—shut down for a few hours on Tuesday when the fire reached it—have all caused extreme stress to evacuees, Lawton said.

The Rev. Dane Neufeld, priest at All Saints, said the speed and power of the wildfire left him speechless.

“Yesterday I was at the church, and went for coffee around 12:30 and came back, and the sky was blue, and then it felt like there was a storm cloud coming overhead,” he said. “I went down to see what was going on, and we saw the smoke coming up over Abasand, and so we watched it for a few minutes, and I guess I figured I should get home. I started biking home, and across the bridge—by the time I got to the bridge, it was raining cinders and the whole horizon was on fire, basically.”

Some panic broke out as people realized the urgency of the situation, he said.

Neufeld said he and his family initially had to flee north, where there are few communities other than mining camps, because the highway south had been closed.

“We have four kids, and we have twin babies, so it wasn’t the most relaxing ride,” he said. “We’re all driving away, and in the rear-view mirror the city is on fire and you are wondering what is going to happen.

Neufeld said he’d heard a number of families in the parish had lost their homes, with others suspecting but still unsure.

“Our home seems to be fine at present, but it’s another hot day with low humidity…so we don’t know,” he said.

As far as he knew, Neufeld says, the city’s two Anglican churches are still standing.

The Rev. Lesley Wheeler-Dame, priest at St. Paul’s Anglican Church in Boyle, said she had driven northward toward Fort McMurray on Wednesday morning to bring gas and food to an Anglican family left stranded on the highway, and was struck by the sheer size of the exodus—and by the plain evidence of the inferno.

“It was heartbreaking to see the line of traffic, and the slow, slow speed at which they were moving, and the ash all over people’s vehicles. That was really sad to see—it broke my heart,” she said. “Noticing the fear on some faces—not knowing where they’re going, for some.”

Some families have been divided by the fire. Wheeler-Dame said she herself was hosting a Lutheran pastor from Fort McMurray, who had fled south while her husband, in the rush to evacuate, had had to flee north of the city.

Many other Anglicans in nearby parishes, she said, are also offering to host evacuees or are otherwise helping with relief efforts.

“What was absolutely remarkable…was how people’s generosity came to the fore” once the disaster hit, Lawton said. Facebook pages to help victims were set up, and many people helped evacuees by driving out to give them extra gas and food, he said.

“My sister was evacuating, and they were among those who ran out of gas partway, and while they were waiting somebody stopped to see if they were OK and gave them water and granola bars,” he said.

The disaster will continue to mean suffering for many people long after the fire is put out, he said.

“People will need, eventually, everything,” he said. “They’re going to have to decide if they’re going back—that’s where their jobs have been, so if they go back, they don’t have a home to go back to and nothing to put in it, so they will need literally everything.”

In addition to housing and pastoral care, some people will likely need help with post-traumatic stress caused by the disaster, he said.

“The only thing we have to [help us] get our heads around this is a war situation, where an entire city is destroyed—that’s the closest thing I can think of,” he said.