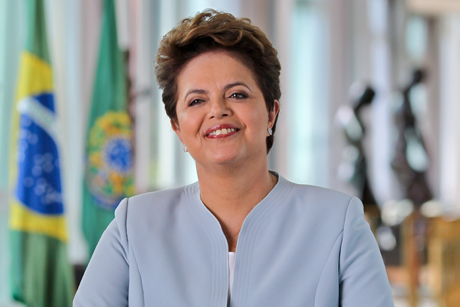 Brazil’s President Dilma Rousseff has the support of the country’s Anglicans as she faces impeachment proceedings
Photo: Roberto Stuckert Filho

[Anglican Communion News Service] Anglicans in Brazil are continuing to stand-by the country’s embattled president, Dilma Rousseff, claiming that attempts to impeach her are a right-wing attempt to scupper her party’s endeavors to support Brazil’s poor and marginalized.

Since coming to power in 2003, Rousseff’s Workers’ Party has overseen huge improvements in the lives of low income and vulnerable communities. But right wing opponents – in alliance with Christian fundamentalists – are seeking to have her impeached.

The lower house of Brazil’s Parliament voted to start impeachment proceedings against Rousseff earlier this month over charges that she manipulated government accounts. The upper House will consider the move next month and are expected to suspend  Rousseff while they carry out a trial of the charges, which she denies.

There have been large-scale protests throughout the country by supporters and opponents of Rousseff. The Primate of Brazil, the Most Rev. Francisco de Assis da Silva, and the province’s House of Bishops have both issued statements in support of the president.

“Essentially, we are witnessing an attempted coup by right wing politicians who represent the interests of Brazil’s wealthy minority and want to put a stop to social welfare for the poor,” the Rev. Joabe Cavalcanti, a former a trade union leader in Brazil who now serves as a trustee for the Anglican Mission agency United Society. “Since the dark days of the continent’s military dictatorships, South America has come a long way. Democracy has been embraced.

“Now many people fear that those achievements could be put in peril by the current undemocratic, non-electoral and non-judicial attempts to overthrow Brazil’s elected president.”

In an interview with the United Society, da Silva, said that he is continuing to support Rousseff and her party in their efforts to improve the lives of the poor.

“What we are seeing is the emergence of a political alliance between Brazil’s wealthy elite and Christian conservatives in an attempt to stop social advances for the poor. These people are opposing legislation that supports women and education for all.

“I find it shocking that MPs are using the name of God to justify their attempts to impeach President Rousseff. They are trying to give a religious justification for their attempts to block social welfare initiatives being put forward by the president.”

In a statement providing background to the current crisis, the United Society say: “There are accusations of corruption and scandal on both sides of the political divide in Brazil. In essence, the disagreements boil down to a contest between left- and right-wing agendas.

“Since her re-election in 2014, President Rousseff’s popularity has plummeted due to an ongoing economic crisis, national corruption scandals, and the fall of many middle-class Brazilians into poverty.

“In response, opposition parties are attempting to remove her from power, claiming she should be impeached for using money from state-owned banks to safeguard an anti-poverty program. However, it has been noted that this budget strategy has been used by previous presidents without complaint. Indeed, the same budgetary maneuver was used by Senator Antonio Anastasia, rapporteur of the Upper House Impeachment Committee, when he was governor of Minas Gerais.

“Many of the politicians who want to see the president impeached are themselves under investigation for corruption, even for torture and practicing modern slavery. As one example, Federal Deputy André Moura, of the Social Christian Party Sergipe, which voted for the impeachment, is charged with attempted murder.”

Commenting on Rousseff’s opponents, the Brasilia-based Anglican blogger Rodrigo Gomes da Paixao, wrote: “They are self-centered members of an elite that doesn’t want the government to pay social welfare. That is the very reason for which they plan to impeach Rousseff – because of her budgetary maneuvers to guarantee the payment of a social benefit to poor families.”

Speaking to the United Society, da Paixao added: “It is worth highlighting that the undemocratic ventures we are seeing are only possible because Brazil – unlike Argentina, Chile and Uruguay – has never punished the coup-plotters of the past. While Argentina’s dictator Videla died in jail, João Batista Figueiredo, the last dictator in Brazil, enjoyed a quiet retirement in Rio.”

He said that if the impeachment went ahead, and the country adopted the economic agenda of the president’s rival Vice President Michel Temer, ordinary Brazilian workers would lose a huge amount.

“The Bolsa Família program, which helped reduce poverty, would be limited to families earning less than a dollar per day,” he said. “Funds for building popular housing would be limited. Workers would have to work until they’re 65 in order to retire (in order to accumulate the required 35 years of social security contributions). Retired people wouldn’t have their pensions automatically adjusted to the annual minimum wage raise. And the minimum wage itself wouldn’t be adjusted by inflation.

“Temer also plans to please evangelicals by disallowing women priests and doing away with aspects of racial equality law and human rights, which will certainly affect current programs to tackle institutional sexism, racism and homophobia. By contrast, President Rousseff’s Workers’ Party is seen as the political patron of LGBTs, Indians, blacks and feminists.”

Cavalcanti described the achievements of the Workers’ Party since coming to power as “truly monumental,” adding: “It is the largest and most rapid redistribution of wealth and reduction in poverty ever carried out by a democratic country in the history of the world.”

And in what he describes as “one of the largest house-building programs the world had ever seen,” the government have built 3.4 million houses between 2009 and 2014 for poor families who had been living in shanty towns and other substandard accommodation.

The United Society has published a prayer for Brazil: