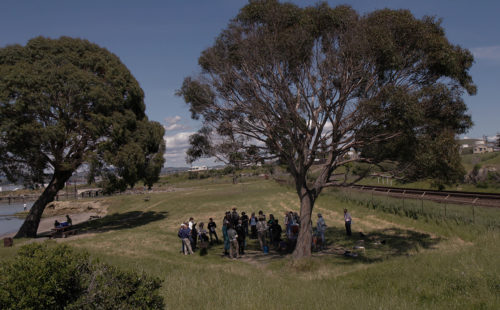 Episcopalians from the Diocese of California gathered under a tree at Lone Tree Point along the East Bay in Rodeo, California, northeast of San Francisco for the April 23 EcoConfirmation, where participants reaffirmed their commitment to the environment. Photo: Lynette Wilson/Episcopal News Service

[Episcopal News Service – Rodeo, California] Three words, three additional words, is all it takes to expand the way Episcopalians are called to live out their faith to include care of the Earth.

In the Episcopal Diocese of California, the Baptismal Covenant’s fifth and final question that follows the Apostles’ Creed, the question reads: “Will you strive for justice and peace among all people and respect the dignity of the Earth and of every human being?” The keyword, of course, being “Earth.”

“For about as long as the bishop has been here he’s been reminding us in most baptisms and confirmations that we are committed to reconciliation with God, each other and the Earth,” said the Rev. Julia McCray-Goldsmith, the diocese’s canon for discipleship. “Part of that is his own deep commitment to healthy stewardship of the Earth; and I would say to the integrity of our incarnated nature, to ourselves as physical beings who really can’t be separated from the human and natural ecologies we dwell in.”

On Saturday, April 23, the day after Earth Day, which this year marked the historic signing of the Paris Agreement, the first international climate agreement aimed at reducing greenhouse gas emissions and limiting global warming to below 2 degrees Celsius, the Diocese of California hosted its third annual EcoConfirmation. 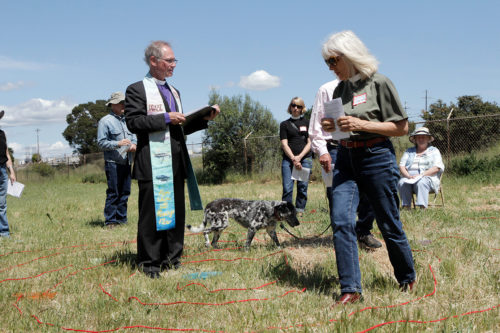 The Rev. Este Cantor, vicar of Good Shepherd Episcopal Church in Berkeley, California, leads a regular attendee (behind her), into the Cosmic Walk to be received into the Episcopal Church during the April 23 EcoConfirmation at Lone Tree Point in Rodeo. The man’s dog followed him into the circle where he was received by Bishop Marc Andrus. Photo: Lynette Wilson/Episcopal News Service

During the EcoConfirmation participants uphold their baptismal vow to “cherish the wondrous works of God, and protect the beauty and integrity of all creation.” As a community, they recommit themselves to the Fifth Mark of Mission, “to strive to safeguard the integrity of creation and sustain and renew the life of the Earth.”

During his homily, California Bishop Marc Andrus, who represented Presiding Bishop Michael Curry and the Episcopal Church at the April 22 signing ceremony of the climate agreement at the United Nations headquarters in New York, reflected on the significance of the previous day.

“The Episcopal Church and all the Christian world, indeed all the world of faith, is given this moment to stand with all the Earth and the healing of what has become what is a very sick Mother Earth,” he said. “And this little Earth, so fragile, so handmade in every way, and yet so incredibly beautiful to me, is a seed that can be as powerful as the seed that began all of this. Why? Because it is God who starts the seed to grow. It is God that gives the growth. God who makes the seed. God who blesses us with this day.”

The Paris Agreement calls on countries worldwide to limit carbon emissions, which will require a transition from fossil fuels to more renewable sources to meet their energy needs. In its third incarnation, rather than take place in a place of unspoiled natural beauty, like a retreat center in Sonoma County or Half Moon Bay, the outdoor service took place at Lone Tree Point in the shadows of an oil refinery in Rodeo, a diverse working-class community in the East Bay 25 miles northeast of San Francisco. 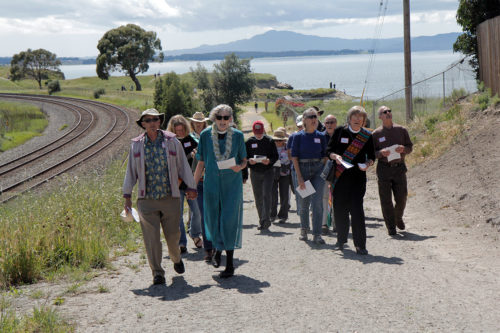 The Rev. Susan Champion, rector of Christ the Lord Episcopal Church, Pinole, leads more than 25 participants in the April 23 EcoConfirmation on a journey to the communion table, stopping for prayers at three points along the way where beauty and degradation meet. She and her husband, the Rev. Peter Champion, live in Rodeo. Photo: Lynette Wilson/Episcopal News Service

The poignant location, given the signing of the climate agreement and its emphasis on reducing dependence on fossil fuels, was suggested by the Rev. Susan Champion, rector of Christ the Lord Episcopal Church in neighboring Pinole, who lives in Rodeo with her husband, the Rev. Peter Champion, and substitute teaches in the local public school system.

When proposing the location, Champion asked: “What if we held it at a place that would remind us of the human degradation of the environment?”

The Phillips 66 refinery is one of five in the San Francisco Bay Area: four are located in Costa County. It processes 120,000 barrels a day. Photo: Lynette Wilson/Episcopal News Service

The Phillips 66 refinery is massive, and is one of five oil refineries in the Bay Area; it has repeatedly received notices for violating state air quality standards and is ranked as California’s seventh most toxic polluter. Not only is the refinery huge, but it’s near a public housing project and a state-run Head Start program serving children. Many residents, said Champion, suffer from asthma and other air-quality related illnesses.

Rodeo is unincorporated, she added, and therefore doesn’t have a city council, its residents represented by one man on the Contra Costa County Board of Supervisors. Local media doesn’t cover the refinery, and it was through a brief carried on the Dow Jones News wire that ran in the Wall Street Journal earlier this year that residents learned an equipment malfunction had caused 500 pounds of sulfur dioxide to be released from the 120,000-barrel-a-day refinery.

The service began with the Cosmic Walk, a mediation on the history of creation beginning with the Big Bang 14 billion years ago and the formation of the Earth’s atmosphere, through the emergence of homo sapiens, the writing of the Bible and Jesus’s birth to the discovery of gold in California in 1848 and oil becoming a major industry in the state in the early 20th century to 1969, when humans first viewed the Earth from space.

So how can the EcoConfirmation remind Episcopalians of the impact humans are having on the planet? “I think the use of the Cosmic Walk reminding us of our deep interrelatedness is important,” said Andrus following the service.

Miriam MacGillis, of New Jersey’s Genesis Farms, created the Cosmic Walk as a way to bring the Earth’s 14-billion-year history from something humans know in their heads to something they know in their hearts. Andrus and his wife, Shelia, brought it to the Diocese of California shortly after his consecration as bishop 10 years ago.

As Andrus mentioned during the service, the world is in the proposed Anthropocene Epoch, or the epoch when human influence is having a significant impact on the Earth’s geology and ecosystems. To consciously curb human influence will take a shift in human thinking regarding how humans relate to one another and the ecosystems and economies they are a part of.

“The move that we have to make at this point is the move from being a world where there are some subjects like humans and then there are many objects, and that would include humans used for labor and trafficking … where humans are used as tools,” he said, following the service. “Basically, the whole Earth has been objectified and that’s a process that’s been going on in the West for about 400 years.

“So what we want to do is work our way out of that and into a universe of subjects. This is a very graspable way to understand our interrelatedness to not only each other but to the Earth and all the life of the Earth.”

Andrus gave his homily, confirmed one man and received another into the Episcopal Church, and the majority of the remaining 25 people recommitted themselves to Christ and renewed the Baptismal Covenant. Then, Champion led the group on a journey to the communion table, stopping for prayers at three points along the way where beauty and degradation meet.

At the first stop, participants looked out over the bay and acknowledged that for 150 years people have allowed pollutants to enter its waters; on the second stop they reflected on the railroad tracks that have transported crude oil in ill-equipped rail cars when oil prices are high, threatening residents’ safety; and finally, to the top of an incline where they viewed the refinery, the dirtiest in California.

“This piece of land, when I first saw it – my heart just broke,” said McCray-Goldsmith, adding that the land itself is like stations of blessings and grief. “This land is kind of a sacramental window, an outward and visible sign and an inward spiritual grace that includes the grace of tears, the grace of grief for the damage we’ve done to the Earth … as we’ve gone out to various sites, the sites have become sacraments every time.”

– Lynette Wilson is a reporter/editor for the Episcopal News Service.