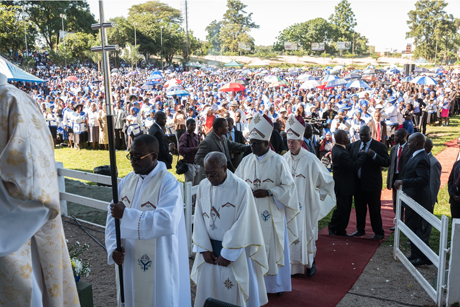 The Archbishop of Canterbury Justin Welby with bishops and clergy from Zimbabwe and the Province of Central Africa at a large-scale Eucharist in Harare’s Glamis Arena, Zimbabwe, on Sunday. Photo: Jim Grover

[Anglican Communion News Service] More than six thousand people from across Zimbabwe heard the Archbishop of Canterbury pay tribute to their church’s faith, courage and persistence in the face of difficult times.

Archbishop Justin was speaking at the Glamis Arena in Harare on Sunday (17 April) at a colourful and energetic celebration that brought together clergy and choirs from all parts of the country. They were joined by hundreds of members of the Mothers’ Union. Among the guests were the MU’s worldwide president, Lynne Tembey, and the British ambassador, Catriona Laing.

“It is a joy to be here with a church that is remembered and loved all around the world,” the Archbishop told worshipers. “All Christians everywhere salute you.”

He said the Church in Zimbabwe had faced troubles, even after they had “got their churches back”, and he cited water shortages; high prices; and crops damaged by the effects of climate change. But he said that the Church served a God who had overcome suffering – whatever the circumstances, nothing was beyond his reach and no-one was too far away.

The Archbishop encouraged worshipers to reach out beyond natural boundaries, to share what God had given them.

“In Zimbabwe, you have shown that you trust Jesus. In the Anglican Communion, we need to share the love of Jesus generously with those who do not agree with us,” he said. “The example of the church here will be a source of renewal for the whole Anglican Communion.”

Afterwards, the Bishop of Matebeleland, the Rt Revd Cleophas Lunga, said it has been very special for the people of Zimbabwe that Archbishop Welby had travelled to see them.

“He has come at the right time. His visit will further encourage the church here,” he said. “And to know that people outside Zimbabwe – among them the Archbishop of Canterbury – have been praying for us means a lot.”

Archbishop Justin’s flying visit to Harare was the first to Zimbabwe by an Archbishop of Canterbury since Dr Rowan Williams visited in October 2011. That came at a time when renegade Bishop Kunonga had shut his congregation out of the cathedral in Harare.

Archbishop Justin was already in the Anglican Province of Central Africa as he was attending the Anglican Consultative Council meeting (ACC-16) in Lusaka in neighbouring Zambia.

In a meeting with President Robert Mugabe after the service, Archbishop Justin applauded the fact that relations between church and state had now improved.