[Episcopal News Service – Lusaka, Zambia] The outgoing chair of the Anglican Consultative Council says ACC-16, which concluded here April 19, formed a unique vision of the body of Christ and its members felt that God was with them.

“We’ve been able to see that our diverseness and that some of our differences in culture, language and ways of being are actually an enrichment of the body of Christ,” retired Malawi Bishop James Tengatenga said during a closing news conference the evening of April 18, the last full day of the April 8-19 meeting at the Cathedral of the Holy Cross here.

“It has been a celebration of the life of the church and God has been with us,” he said.

Archbishop of Canterbury Justin Welby, speaking at the same news conference, said the meeting’s opening Eucharist, which combined thousands of Anglicans with Zambian President Edgar Chagwa Lungu and Kenneth Kaunda, the country’s first president, and other government officials, epitomized what the work of the church is about.

Calling the service a “hugely joyful celebration,” Welby said it “summed up most of what the church is about.” The service gave the sense “that we can count on Christ for strength even in difficult times and difficult places; to look for truth as what the presiding bishop of [the Episcopal Church] calls a Jesus people.”

That unity in Christ was echoed on April 19, the last day of the meeting, when Bishop of Nairobi Joel Waweru told the council that his experience at the meeting and his election to the Standing Committee the day before was a “big step to the church in Kenya.”

Kenyan Archbishop Eliud Wabukala was one of four provincial leaders – the others were Uganda Archbishop Stanley Ntagali, Nigerian Archbishop Nicholas Okoh and Rwandan Archbishop Onesphore Rwaje – who said they would not send their ACC members to the meeting. However, Kenya’s three ACC members came and Wabukala acknowledged that decision, claiming that those three members had “been encouraged to disregard my spiritual counsel and attend this meeting.” Waweru is one of six candidates who will soon stand for election as Kenya’s archbishop. 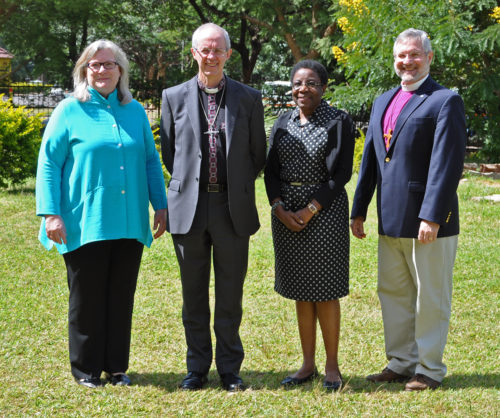 The three Episcopal Church ACC members all said that they had been warmly welcomed to the meeting despite tensions that had been simmering since the 78th General Convention’s decision to change canonical language that defines marriage as being between a man and a woman (Resolution A036) and authorize two new marriage rites with language allowing them to be used by same-sex or opposite-sex couples (Resolution A054).

“It gave me more appreciation of his role and his responsibility, and the burden of responsibility that he carries,” Jennings said during a conversation among the three members at the end of the day April 18. “I think it gave him a deeper sense of who we are as the Episcopal Church.”

Douglas agreed, saying the meeting had a “relaxed atmosphere where we could be very honest and open about how some of the actions of the Anglican Communion have impacted us.” The three were able to share the “emotional impact” of the primates’ communique, he said.

Ballentine, who was assigned with Welby to the same table group during the meeting, said the archbishop had been “very gracious throughout.”

“I think he does have an appreciation for who we are,” she said, adding that she got a sense of “the balancing act a person in his position has to play when you’ve got some loud voices on two ends of the spectrum.”

There had been varying levels of pressure, along with a sense of expectation, over how the ACC would respond to the January call of the communion’s primates for three years of “consequences” for the Episcopal Church because of its actions on marriage. “It is both my and the primates’ desire, hope and prayer that the ACC should also share in working through the consequences of our impaired relationships,” Welby, in his formal report on the primates’ actions, told the members on the first day of the ACC meeting.

And, while there was much informal discussion and even some behind-the-scenes negotiations, in the end, the council simply noted in a resolution dubbed C34that it had “received” Welby’s report and affirmed the primates’ commitment to walk together. The resolution (dubbed C34) also committed the council “to continue to seek appropriate ways for the provinces of the Anglican Communion to walk together with each other and with the primates and other Instruments of Communion.”

Jennings said she and her two colleagues were aware of the concern throughout the Episcopal Church about how the ACC would respond to the primates’ action. The resolution that was passed “was a way for all of us in the communion to move forward,” she said.

Douglas said the resolution was focused on the work of the ACC and “not so much on what the primates did or said but, what it means for us to live together in our differences in light of another meeting that happened a few months before.” The members listened to the archbishop’s report, “considered its impact on our lives and then decided accordingly as to our work as the ACC.”

“We’ll look back on today and see that the door could have closed or opened,” he said. “It opened.”

Another resolution, labeled C35, that would have said the council “welcomes” the primates’ communique, was withdrawn just before debate on it was scheduled to begin.

The work of the ACC that Douglas spoke about included reviewing work across the communion since the last ACC meeting in the fall of 2012 and then pointing toward work yet to be done.

“There were an amazing number of resolutions about issues that are of common concern and, frankly, are desperate situations in many places,” Jennings said.

Jennings was struck by the fact that “gender justice and gender-based violence cuts across every province in the communion and I think that the ACC and its networks are really struggling on how to address this and find concrete ways to solve some of these issues that diminish so many human beings in our provinces.”

Ballentine also pointed to the series of resolutions that the ACC passed about instituting safe church policies throughout all the provinces as an example of how gender issues were addressed across the board during the meeting.

Ballentine, Douglas and Jennings issued a letter to the church at the end of the meeting.

The ACC also lived into the meeting’s theme of “Intentional Discipleship in a World of Difference” by accepting a report titled Intentional Discipleship and Disciple-Making: An Anglican Guide for Christian Life and Formation calling for a “season of intentional discipleship” from now until ACC-18, which could run until approximately 2021. Douglas said during the meeting that such a call would be a major statement about the communion’s priorities.

The ACC agreed on the last day of the meeting to amend its constitution to allow the Standing Committee to meet electronically as a way of reducing the communion’s footprint. Outgoing ACC Vice Chair Elizabeth Paver cautioned that face-to-face meetings are invaluable, especially with the large number of new members elected to the Standing Committee during this meeting. However, Margaret Swinson, her successor, said the additional intent of the amendment was to allow more frequent meetings of the committee without incurring the costs of travel and lodging.

Among the other resolutions passed were ones on climate change, youth involvement in the communion, solidarity with persecuted people and interfaith and ecumenical relations. Paver said during the closing news conference that the ACC resolutions can be seen as a commissioning of the council members to return to their provinces and promote the mission and ministry to which the council committed.

And, Wilfred F. Baker, lay member from the Church of Ireland, said during the final evaluation that there was a “sense of purpose” during the meeting “and we can go home and try to bring that to our churches.” Baker also said his table group affirmed that, despite disagreements, the meeting had exhibited unity amid its diversity.

Suzanne Lawson, Anglican Church of Canada lay member, said that when she goes home she strives not only to tell people what the ACC has done but she also talks about the relationships she has made. “I want them to understand their sisters and brothers [around the communion] as people with stories to tell,” she said.

“We have discovered that our baptismal identity trumps everything,” said Bishop of Chelmsford Stephen Cottrell, Church of England bishop member.

The 17th meeting of the ACC will take place in 2019 in the Diocese of Sao Paulo, a part of the Igreja Episcopal Anglicana do Brasil.

Once the April 19 session was over, the ACC members and staff adjourned to the cathedral steps where they videotaped birthday greetings to Queen Elizabeth II, who turns 90 on April 21. 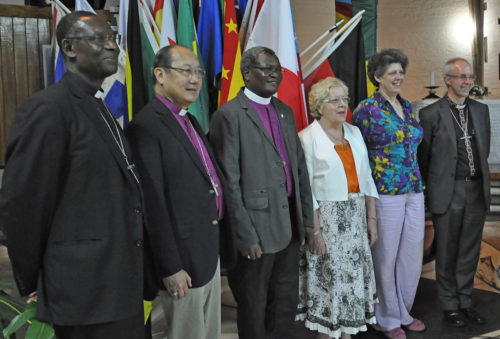