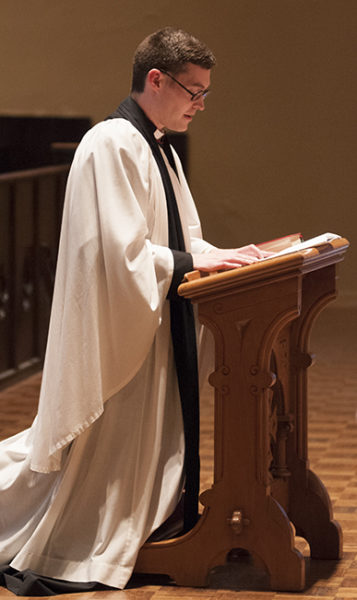 [Trinity Episcopal Cathedral press release] The Very Rev’d Nathan LeRud was installed as the third dean of Trinity Episcopal Cathedral in Portland, Oregon, during a special service of Choral Evensong on Sunday, April 17. The Rt. Rev’d Michael Hanley, Bishop of Oregon, performed the installation and Rabbi Michael Cahana of Congregation Beth Israel in Portland delivered the homily. In Rabbi Cahana’s message, he spoke about the importance of leadership and with it should come humility and the responsibility of leading by example. Oregon’s Governor Kate Brown and Executive Director of Ecumenical Ministries of Oregon Jan Elfers read the lessons.

“It’s a great honor for James and me to be called to be a part of Trinity’s future. The installation service was a powerful reminder that being a cathedral means not only serving our bishop and diocese, but serving as a gathering place and a strong moral voice for the city of Portland and the state of Oregon. It was a joy to welcome so many of our partners in ministry to this celebration as Trinity begins this new chapter in our history. God is doing incredible things in this place, and it’s a privilege to be a part of that.”

Nathan was initially called to Trinity in 2009 as a part-time priest for youth and families. In 2010, Trinity’s second dean, the Very Rev’d William Lupfer, asked him to serve as Assistant to the Dean, later Canon Residentiary, and in 2012, he was appointed Canon for Spiritual Formation. In 2014, Nathan was called by the vestry to serve as acting dean during Trinity’s search process, and in January of 2016, he was elected by the vestry and chapter to serve as Trinity’s third dean.

A fifth-generation Oregonian and native Portlander, LeRud is the son of a pastor and was raised and baptized in the Evangelical Church of North America. He holds a BA in English and Theatre from Whitman College in Walla Walla, WA and an M.Div from the General Theological Seminary in New York City. Sponsored for ordination by the Episcopal Diocese of Spokane, LeRud was ordained to the priesthood in 2007. Before being called to Trinity he served as curate of Christ Episcopal Church in Ridgewood, New Jersey.

LeRud is married to the Reverend James Michael Joiner, assistant rector of St. Michael and All Angels Episcopal Church in Portland. Theirs was the first same-gender marriage conducted at the Cathedral by Bishop Michael Hanley.

Trinity Episcopal Cathedral was founded in 1851 and was designated cathedral for the Episcopal Diocese of Oregon in 1993. Among the largest Episcopal churches in the region, Trinity identifies as a progressive congregation of 1800 members open to many points of view, but united in a commitment to spiritual formation, community outreach, and social justice.