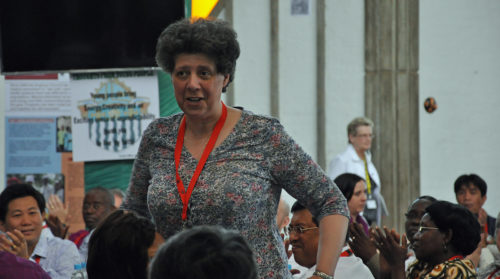 Margaret Swinson, the Church of England’s lay member, was elected April 18 by acclamation to be the next vice chair of the Anglican Consultative Council. Photo: Mary Frances Schjonberg/Episcopal News Service

Swinson, who was unopposed, will succeed Elizabeth Paver, a Church of England lay member.

Swinson, a chartered accountant from the Diocese of Liverpool, works part-time as a company secretary with responsibility for corporate governance, according to her nomination biography. She also works in private practice.

She joined the ACC at its 2012 meeting in Auckland and has been a member of the Church of England’s General Synod since 1985, including spending 11 years chairing debates. Swinson was also part of the eventually successful effort to allow women to be ordained and consecrated bishops in the Church of England.

Swinson will join Hong Kong Archbishop and Primate Paul Kwong, the newly elected ACC chair, to form the council leadership at the close of this meeting. Kwong’s and Swinson’s terms will last until the close of ACC19. The council normally meets every three to four years.

The council also elected five representatives to the communion’s Standing Committee. They are:

Eleven ACC members stood for election as Standing Committee members. The other nominees were:

The Standing Committee is a 14-member group (15, if the Archbishop of Canterbury is present, as he is an ex officio member, as well as being its president). Seven of its members are elected by the members of the ACC, and five are members of the Primates’ Standing Committee. The other two members are the ACC chair and vice chair. The committee is the executive arm of the Anglican Consultative Council, charged with advancing its work between its meetings.

The 16th meeting of the Anglican Consultative Council at the Cathedral of the Holy Cross began on April 8 and closes April 19.