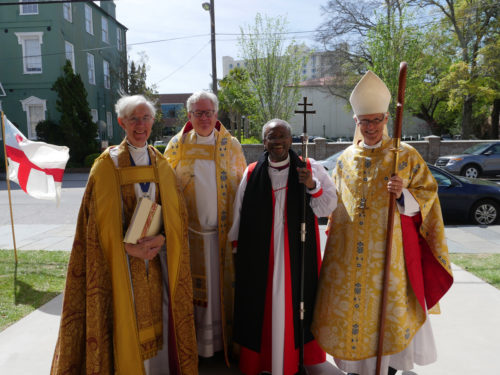 The visit was a time to give thanks for the renewed life and energy of the diocese, and to hear Curry’s call to put that energy to use as part of the Jesus Movement, relying not on the strength of power, but the strength of love. 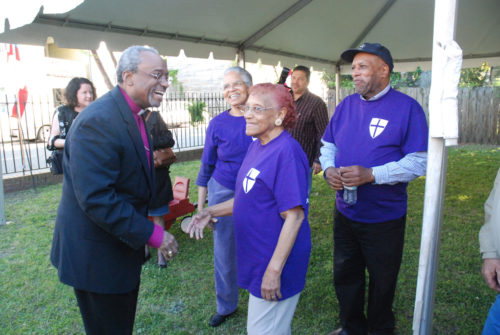 Five downtown churches hosted events for the visit, and capacity crowds showed up eager to meet the presiding bishop and celebrate the recovery and growth in the reorganized diocese in the eastern half of South Carolina, which endured a split in 2012-13.

“Our Presiding Bishop certainly infused this diocese with enthusiasm and commitment on behalf of the Jesus Movement during his time here,” said the Rt. Rev. Charles G. vonRosenberg, bishop provisional of The Episcopal Church in South Carolina. “He encouraged us along the road we have traveled for over three years now, and he challenged us for the way ahead.”

“For our churches and for our people, this was a time of revival and of faith-building, in the much-loved traditions of the Episcopal Church,” vonRosenberg said. “At the weekend’s end, Episcopalians in this part of the world were unified in gratitude for the many blessings we received, and in thanksgiving for our membership in the Episcopal Church and in the Anglican Communion.”

A time to unite

The presiding bishop’s first visit was an ecumenical Community Evening Prayer Service with the Rev. Betty Deas Clark, the senior pastor of Mother Emanuel AME Church. The nine people who were shot to death on June 17, 2015, at Mother Emanuel were remembered at the service, which took place at St. Stephen’s Episcopal Church, two blocks from Emanuel. Clark preached on “A Time to Unite.”

“The body of Christ is being called to come together like never before,” she said. Drawing on examples from St. Paul and the early church, she said that all people together, in community, form a temple for God. “This is a marvelous thing that God has done: he has made a single body of diverse people. Not an Old-Testament Israel and a New-Testament church, but one body, one temple, to serve as the dwelling place of one Spirit. In God’s family there are no barriers of race, class, color, for we are one in Christ Jesus.” (Video of Clark’s sermon)

Curry gave thanks for Clark’s ministry, the witness of Mother Emanuel and her people, and the Charleston community.

“Charleston has witnessed,” he said. “The Greek word for ‘witness’ is related to the word for ‘martyr.’ And you have been a martyred witness, a witness to this fractured and divided country, that division is not the way. So we thank God for you.” (Video of the Presiding Bishop’s remarks)

In his keynote address the next day, he spoke again of the Emanuel massacre. “Self-centeredness is destructive,” he said. “We know it. Charleston knows it. You have seen the results of self-centered existence manifested in hatred and its destructive power. You’ve seen it.

“You’ve also seen the beauty and the painful hope that love and forgiveness can bring. It can save us all.”

The visit included a celebration of another kind of unity, as the presiding bishop preached at the newly designated cathedral of the diocese, Grace Church Cathedral. Also present was the dean of Canterbury Cathedral, the Very Rev. Robert Willis. (video of the Choral Eucharist at Grace)

The presiding bishop gave his blessing at the dedication of a stone taken from Canterbury Cathedral. Willis brought the stone, carved with a Canterbury Cross, to be placed in Grace, a tradition followed in cathedrals around the Anglican world. The dean said the gift was a way for Grace “to express its organic unity with the Mother Church and all the other branches of our Episcopal Anglican communion.” Read more about the cathedral celebration here.

The centerpiece of the weekend was an all-day conference, “Spirituality, Evangelism, and Justice,” at Church of the Holy Communion. About 350 paid registrants spent the day engaging with the Presiding Bishop and five other speakers from across The Episcopal Church on topics of racial reconciliation, evangelism and justice. The conference was sponsored by The Episcopal Forum of South Carolina, a nonprofit group that supports the Episcopal Church and the local diocese through educational efforts.

The presiding bishop focused on Jesus’ baptism in his keynote address. 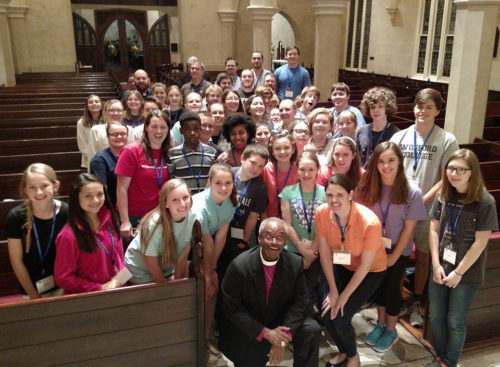 Presiding Bishop Michael Curry poses with some of the 50 youth who attended the Bishop’s Lock-In on April 8 at Grace Church Cathedral in celebration of the presiding bishop’s visit to Charleston April 8-10. Photo: Lauren Kinard

“Anybody here baptized?” he asked, drawing a response of laughter and a church full of raised hands. “Guess what – you’re in the Jesus Movement! And we are the 21st-century Episcopal version of the Jesus Movement.
“And the nice thing about movements is that they’re very flexible and adaptable,” he said. “Movements can move quick. They can pivot. They can move fast, they can adapt to new and changing circumstances.

More than 50 youth from 10 churches also joined the celebration, gathering for an overnight lock-in April 8-9 at the cathedral in honor of the visit. Curry spent time with them before Evening Prayer on Friday night.
The presiding bishop’s time in Charleston also served as an opportunity to give thanks for vonRosenberg, who has announced he will “re-retire” in June, three years after he came out of retirement to be South Carolina’s provisional bishop.

“We live in times very often when there are questions and sometimes debate about whether or not leadership is even possible,” Curry said. “You in The Episcopal Church in South Carolina know that leadership even after retirement is actually possible, because you have seen it in Charles vonRosenberg.”

— Holly Behre is director of communications for the Episcopal Church in South Carolina.