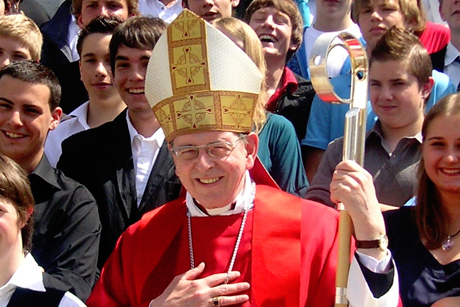 [Anglican Communion News Service] Father Tony Currer, officer responsible for Anglican Relations at the Pontifical Council for Promoting Christian Unity (PCPCU), brought a message of greeting to all the participants of the 16th Anglican Consultative Council Meeting, in Lusaka (8 to 19 April) from His Eminence Cardinal Kurt Koch, President of the PCPCU.

Grace and peace to you in Christ Jesus our Lord! On behalf of the Roman Catholic Church, and in particular of its Pontifical Council for Promoting Christian Unity, I send heartfelt greetings to all of you gathered for this 16th meeting of the Anglican Consultative Council.

This year marks the fiftieth anniversary of the historic meeting between His Grace Archbishop Michael Ramsey and Blessed Pope Paul VI. A direct fruit of that meeting was the Joint Preparatory Commission which in turn led to the establishment of the Anglican-Roman Catholic International Commission (ARCIC), now in its third phase. We give thanks for those ground-breaking steps taken fifty years ago, which have greatly improved our mutual understanding and the warm friendship that has grown between our two communions.

Working in tandem with ARCIC and, indeed, building upon its achievements, we now have a second commission jointly sponsored by the Pontifical Council for Promoting Christian Unity and the Anglican Communion Office. The International Anglican-Roman Catholic Commission for Unity and Mission (IARCCUM) works for the reception of ARCIC, that the agreements made between us will have a real transforming impact on our ecclesial life in dioceses across the world. The commission is made up of pairs of bishops, one Anglican and one Catholic, from each Anglican Province and corresponding Episcopal Conference where our two communities exist in significant numbers. The task of these bishops is to promote joint initiatives, particularly in mission and witness, and to be advocates of collaboration between our two communities.

We will mark the fiftieth anniversary of Archbishop Ramsey’s meeting with Pope Paul with a meeting of these IARCCUM bishops. During this meeting the bishops will share their experiences and pastoral challenges, and strategize as to how our two communions can work together more closely in ecumenical witness to the world. This fiftieth anniversary celebration is one full of hope, therefore, and one that looks to the future. I ask for your prayers for this initiative, that it will bear much fruit and carry us towards the unity for which Christ prayed.

Our theological dialogue has produced some very important agreements. A key theme recognised very early in its history, was the ecclesiology of communion. The co-chairmen noted the prominence of this theme in their preface to ARCIC I’s Final Report. ARCIC II devoted a whole document to it, and built upon the theme further in subsequent documents. God, through the missions of the Son and Spirit, has invited us into the communion of the most holy Trinity, and communion with God implies communion with one another. To respond with faith to God’s gracious invitation, always demands that we attend with care to the relationships between ourselves. Living in communion means that the wellbeing of each is the concern of all. And when we live this communion well we offer a vision to our world of the communion God wills for all of His creation.

This meeting of the Anglican Consultative Council is an important moment in your living of communion, and therefore of the witness that you, as Anglicans, give to others. Across the world and between different continents and cultures, there are profound differences in our understanding of the human person and morals. Christian communities with a worldwide reach such as yours can provide an example of how to talk and, most especially, how to listen across these cultural and regional differences. I am reminded of the words Pope Francis addressed to the fathers of the extraordinary Synod of bishops in 2014. He invited them both to speak honestly and to “listen with humility and welcome, with an open heart”. As Archbishop Welby has said, we need to show the world how to “disagree well”, which is to say, to disagree while listening with respect and care to the other. To “disagree well” means that we start from the presumption of goodwill: that each member of the communion is, in his or her context, trying to respond to the gospel summons with honesty and generosity; that divergent positions are reached with integrity. Finally, to “disagree well” means that we never give up in our search for agreement, but that we strive for to find a better and a larger consensus. Our very disagreement shows us just how much we need one another. It shows that I cannot, in the specificity of my culture and context, discern God’s will and His truth alone. It is the whole of His people that God guides on its pilgrim way and leads into truth. In our search for God we rely upon one another.

All our effort in seeking Christian unity is based upon this careful, generous listening, a necessary virtue for all God’s faithful people. Our ecumenical endeavour is one of attending to our communion relationships even when our communion is partial or damaged. This meeting of the Anglican Consultative Council, very much like our own recent synods of bishops, requires the virtue of careful and generous listening.

My prayer for you as participants of this 16th Anglican Consultative Council is the same as my prayer for all your four of the instruments of communion: that through the exercise of each; that through faithful listening to the Lord in the scriptures; and by careful listening to each other, the bonds of the communion between the Provinces will be strengthened and deepened.

Yours in Christ,
Kurt Cardinal Koch