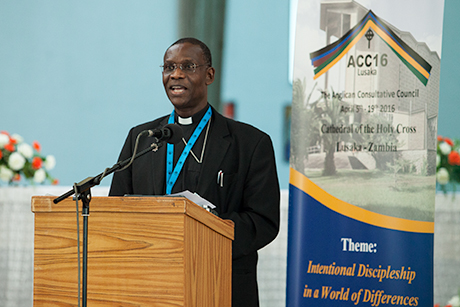 The secretary general’s remarks came in his report to the Anglican Consultative Council about this work since he took up his post last July.

The 78th General Convention’s decided last summer to change canonical language that defines marriage as being between a man and a woman (Resolution A036) and, in Resolution A054,  to authorize two new marriage rites with language allowing them to be used by same-sex or opposite-sex couples. Resolution A054 also requires bishops who oppose same-sex marriage to “make provision for all couples asking to be married in this Church to have access to these liturgies.”

Idowu-Fearon praised the resolution’s provision that “no bishop, priest, deacon or lay person should be coerced or penalized in any manner, nor suffer any canonical disabilities, as a result of his or her theological objection to or support for the 78th General Convention’s action contained in this resolution.”

The secretary general also said he was happy to learn about a small group of bishops that will be appointed to continue seeking unity within the House of Bishops and within and between dioceses.

The House of Bishops, meeting at convention, also passed Mind of the House Resolution X022, titled Communion across Difference, which recognized that a group of minority of bishops were opposed to the General Convention’s approval of same-sex marriage. “We affirm that they are an indispensable part of who we are as the House of Bishops of the Episcopal Church,” the resolution said. “Our church needs their witness.”

The resolution came in response to a statement from a group called Communion Partners dissenting to Resolution 054.

Presiding Bishop Michael Curry told Episcopal News Service April 11 that in February he met with a small group of the bishops representing those who signed onto the statement. “We agreed that I would appoint a working group to discern ways and to make recommendations on how to move the vision of the mind of the house resolution forward,” he said.

The group was discussed at the House of Bishops retreat in March and bishops were invited to volunteer, according the presiding bishop, who said he will be appointing the group soon.

“This is not a formal or legislative committee but a working group to think through ways that we can live out the spirit of the mind of the house resolution,” Curry said. “For me this is a working group to think through how bishops can pastorally and practically help us as church to follow Jesus in the Episcopal way by truly living together as ‘a house of prayer for all people’.”

During his speech, Idowu-Fearon said he was “encouraged that such a committee is to be appointed and, while this may not be an easy task, I have hope that this position will be respected with good intent.”

The Episcopal Church’s decision to change its marriage canon and approve new marriage rites soon became a source of tension in the Anglican Communion. A majority of the leaders of the communion’s 38 provinces – known as primates – during their January gathering called for three years of “consequences”  for the Episcopal Church in response to that decision.

General Convention in June also extended the existence of its Task Force on the Study of Marriage, which had already been operating for three years. Included in its mandate is to continue its study of contemporary trends and norms in terms of marriage but also those who choose to remain single; unmarried persons in intimate relationships; couples who cohabitate either before or instead of marriage; couples who desire a blessing from the church but not marriage.

“This has been an ongoing and very extensive theological, scriptural, moral, ethical study on all aspects of human relationships,” the Rev. Gay Clark Jennings, the Episcopal Church’s ACC clergy member and president of the House of Deputies, told the meeting.