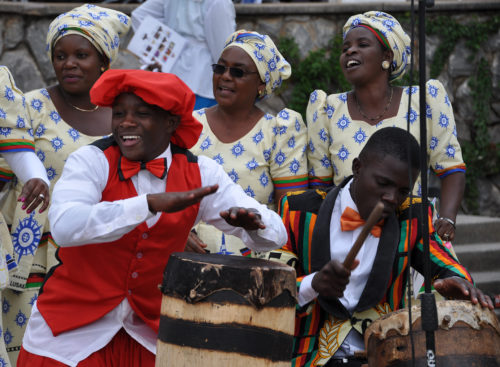 Drummers and singers of the Message Choir of St. Veronica’s Anglican Church sing farewell to participants in the Anglican Consultative Council opening Eucharist in the forecourt of the Cathedral of the Holy Cross in Lusaka. Photo: Mary Frances Schjonberg/Episcopal News Service

[Episcopal News Service – Lusaka, Zambia] Serving the world while modeling love and unity in the imitation of Christ was the overwhelming message of the five-hour Eucharist April 10 that officially opened the Anglican Consultative Council’s 16th meeting.

The ACC members began meeting two days earlier but at this Eucharist they were welcomed and celebrated by Anglicans from all around the Church of the Province of Central Africa. An estimated 4,000-5,000 people attended the service in which Zambian President Edgar Chagwa Lungu and Zambia’s first president, Kenneth Kaunda, joined other government officials and citizens of the Anglican province’s four countries. 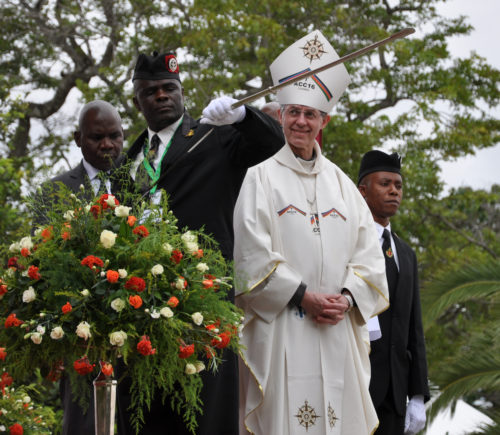 Archbishop of Canterbury Justin Welby, who was the preacher, was frequently greeted with shouts and ululations during the service. Welby had the unusual liturgical role of granting permission to a sword-wielding officer of the church’s brigades so that the color guard of flags from the province’s countries and from around the Anglican Communion could enter the worship space. He then received the flags from Zambia, Zimbabwe, Malawi and Botswana. Near the end of the service his permission was asked for the guard to depart and, granting it, he then returned the four flags.

In between, there was incense and African drums; modern songs and old hymns; brass bands and amplified music. Major dancing broke out many times, including during the peace when Lungu joined in, along with his security detail and a scrum of photographers.

Three young girls recited from memory a long poem about the ACC whose refrain was “Love never fails as long as ACC unites the church.”

Rain had threatened plans to celebrate the Eucharist outside, but dry and partly-cloudy weather prevailed, and the altar remained set up on the portico of the Cathedral of the Holy Cross. The congregation gathered under tents set up on the lawns surrounding the church on Cathedral Hill in the Lusaka neighborhood that also includes government agencies and embassies. The alternative plan in case of rain had been to move the massive altar party, ACC members and dignitaries inside the cathedral while the rest of the congregation remained under the tents.

During his sermon, Welby said the day’s readings (Deuteronomy 6:6-16, Psalm 1:1-6; Ephesians 4:8-16 and the Great Commission Jesus gives in Matthew 28:16-20) all point to the way Christians should tell the stories of their histories, live their lives in the present and bring others to Christ. In a sermon directed to ACC members, members of the host province and government officials, among others, Welby touched on politics and elections, service to the world and the value of being truthful about one’s history rather than using it to foster continued hate.

Recalling that the last thing Jesus does is to send his disciples out into the world and that one of his predecessors, William Temple, said that the church exists for those who are not its members, Welby said, “We show we come from Christ when we go out in humble and joy-filled service.”

We are the mature body of Christ that Paul described in the passage from Ephesians when we rejoice in worship and are full of love, when we are not judgmental, when we do not fall into the old church habit of throwing stones at the weak and flattering the proud and the strong,” the archbishop said. “And that is such a hard thing for all of us in the church or in government to do.”

“Is our message so full of Christ-tempered hope that we create societies of hope?” he asked.  “Do we have so much of the good news alive in us that we consciously seek to introduce people to Jesus who has filled us with joy and hope?”

Welby also pointed to Episcopal Church Presiding Bishop Michael Curry’s call for people to join the Jesus Movement, saying that when we tell the stories of our individual and communal lives – even if they are stories of hurt and loss – the stories must have Jesus and his reconciling love at the center.

That does not mean, the archbishop said, that we will not have “debates and discussions and calls about the need to resist wrong doctrine and calls for unity of the faith, but we will only discern right and wrong when we listen in love.”

“We lack righteousness when we suggest power and leadership in church locally or across the globe is for the benefit of the winners only,” he said. “So our history as a church, as it continues to be developed by this ACC, must be God-centered, righteousness-pursuing.”

The Rev. Samson Mwanza interpreted the archbishop’s sermon into Chewa, a Bantu language spoken in Malawi, Zambia and Zimbabwe. 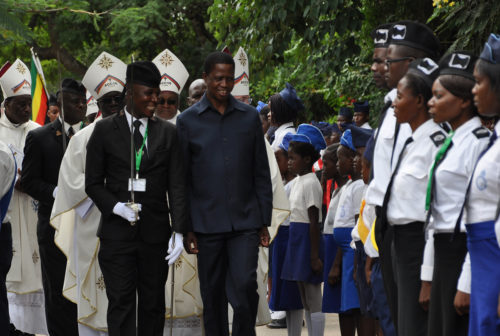 Near the end of the service, President Lungu said that the gathering “is a great honor for us as a nation.”

The fact that the ACC gathers archbishops, bishops, clergy and laity from different backgrounds and countries under one roof “reinforces the very character of Christianity as a unifier of humanity,” the president said.

Lungu called the ACC meeting “a symbol of unity and love in a world of conflict, divisions and differences” and saying it is also “testimony that despite our different nationalities, we can still coexist.”

“If there is one great lesson religion can lend to politics, it is the uniting effect of tolerance as a virtue,” he said.

The president recalled that the church has played a “pivotal role” in Zambia’s development during its 51 years of independence. Lungu said he wanted to pay “glowing tribute” to the Anglican Church in Zambia for being a partner during those years. 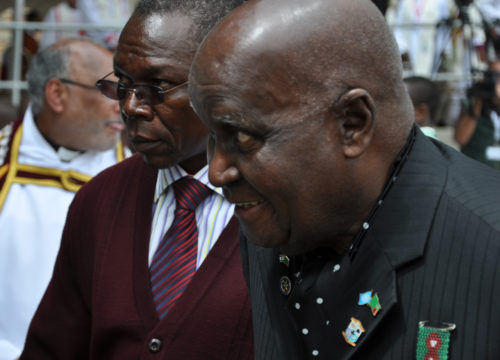 “You have been valuable allies to all successive Zambian governments and we salute you for that and we stand ready to support your works,” Lungu said. “Your partnership with us in education, health and good governance continues to be your Christian witness.”

He singled out the Cathedral of the Holy Cross for providing what he called “the much-needed conducive platform and atmosphere” for the work that achieved Zambia’s return to multi-party democracy in 1991. Zambia, he said, has become a model for peace and unity in Africa.

After a lunch on the cathedral grounds, the day’s festivities continued with a provincial celebration during which ACC members were briefed about each of the province’s four countries – Botswana, Malawi, Zambia and Zimbabwe – and the life of the Anglican church in each of those places.

The 16th meeting of the ACC runs until April 19.

The ACC is one of the four instruments of communion, the others being the Archbishop of Canterbury (who serves as president of the ACC), the Lambeth Conference of Anglican bishops, and the Primates Meeting.

Formed in 1969, the ACC includes clergy and lay people, as well as bishops, among its delegates. The membership includes from one to three persons from each of the Anglican Communion’s 38 provinces. Where there are three members, there is a bishop, a priest and a lay person. Where fewer members are appointed, preference is given to lay membership. The ACC’s constitution is here.

The council generally meets every three or four years. The first meeting was held in Limuru, Kenya, in 1971. The ACC last met in late 2012 in Auckland, New Zealand. The ACC has not gathered in Africa since its ninth meeting in Cape Town, South Africa, in 1993.

The Episcopal Church is represented by Rosalie Ballentine of the Diocese of the Virgin Islands; House of Deputies President the Rev. Gay Clark Jennings of Ohio; and Bishop Ian Douglas of Connecticut.