[Anglican Communion News Service] Bishops around the world should plant a tree every time they do a confirmation or baptism – that was one of the suggestions put to the Archbishop of Canterbury Justin Welby by a group of young Anglicans from Central and Southern Africa as they discussed discipleship and environment. The suggestion emerged as the young people spent an afternoon with Archbishop Welby as part of their week-long conference ahead of the Anglican Consultative Council meeting in Lusaka.

Fifty young people from South Africa, Swaziland, Lesotho, Angola, Namibia, Mozambique, Zambia, Zimbabwe, Malawi and Botswana are taking part in the conference, which has been sponsored by the UK-based Christian development agency Tearfund.

Archbishop Welby was joined at the conference by the Archbishop of Central Africa, Albert Chama. Together, they listened to presentations from the young Christians on issues including renewable energy, mining, deforestation, land erosion, farming practices, waste, water, and air pollution. Some of these took the form of oral presentations while others used drama and song to get their message across.

One group of young people put the Archbishop on a tight spot when they incorporated him into their drama – as the story unfolded, a young person playing the part of a farmer argued that the Archbishop would agree that he was entitled to chop down all his trees because the Bible said that the Earth was man’s to subdue.

Archbishop Welby replied, “No!” before another participant explained that this was exactly the response that they were looking for – and they wanted more church leaders to speak up for the environment. 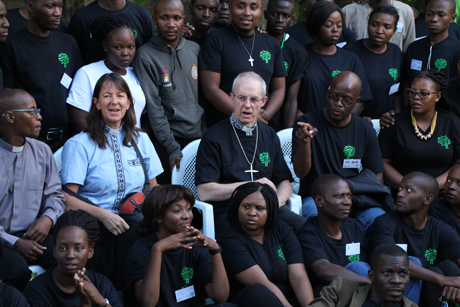 Archbishop of Canterbury Justin Welby with the Revd Dr Rachel Mash, environmental coordinator for the Anglican Church of Southern Africa with some of the youth participants at the environment and discipleship conference in Lusaka. Photo: Gavin Drake/Anglican Communion News Service

The youth conference will conclude tomorrow with a Eucharist led by Archbishop Chama. Two of the young people will then be sent from the youth conference to the Anglican Consultative Council meeting (ACC-16) which gets underway in Lusaka’s Cathedral of the Holy Cross tomorrow (Friday), to present the young people’s ideas to the wider Anglican Communion.

One of them is Cathrine Ngangira from the Diocese of Harare in Zimbabwe. She was part of a group that had been looking at deforestation. As that group made their presentation to the Archbishops, she outlined plans for a “100-Day Campaign for a New Green World.” This included a range of activities from tree planting to releasing a pop song to get the message across.

The campaign was intended merely as an illustration for the conference, but Cathrine Ngangira said she is determined to put them into practice. “The ideas came out of this conference but I have already had a chat with our environment chaplain and I said that this doesn’t have to end just like that,” she told ACNS.

“We are now making sure that this movement really becomes something that we can put into action. And as soon as we go back to the diocese we are going to really start the 100 Day Campaign of the New Green World.”

She added: “There is a calling that God is calling us to do. There is a change that we really have to see in this world and it has to come with us. I always say to my colleagues: ‘be part of the change that you want to see’. And today marks a new beginning of another change – not just in Harare Diocese, or Zimbabwe, but worldwide.

“We are now going to be part of the change that we want to see.” 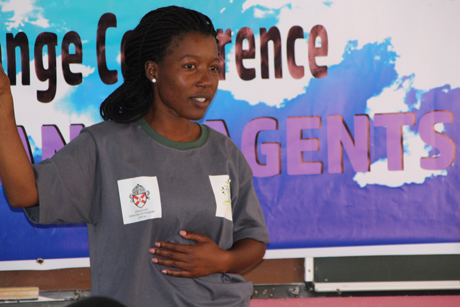 Cathrine Ngangira from the Diocese of Harare calls for 100 Days of Action for a New Green World.
Photo: Gavin Drake/Anglican Communion News Service

After the presentations, Archbishop Welby addressed the young people ahead of a question and answer session. He began by saying that with old age comes declining eyesight, and that without his glasses “I can’t really see you – you just become a fuzzy mess in front of me.”

He likened this to what was going on “in much of the richer parts of the world” where “people look but they don’t see. . . That applies particularly to the environment.”

He said that if they were to do the same presentations to members of the British House of Lords – the upper house of the UK Parliament – “many of them would say: ‘it’s not like that’, ‘you don’t understand’, ‘you’ve exaggerated it’, or ‘it won’t happen in our lifetimes’”.

He added that “it is not a new problem” and likened it to the situation in the Church at Laodicea in the Book of Revelation: “You say, ‘I am rich: I have acquired wealth and do not need a thing.’ But you do not realise that you are wretched, pitiful, poor, blind and naked.”

“All over the world, people look around and say ‘it’s really okay. It’s just a slightly hot summer’ or ‘it’s slightly bad rainy season – I remember my grandfather said there was a slightly bad rainy season from time to time. It’s okay. It’s just weather changes. Nobody can predict the weather. We’re okay’, or ‘yes, okay, this strip mining is producing lakes full of polluted water where you get fish that are poisonous if you get fish at all. . . but it will all go away. There isn’t a problem.’

He encouraged the young people to become servants of Christ, serving the world; saying that, as a Church, “We prophecy better when we kneel at someone’s feet than when we’re standing in a pulpit.” 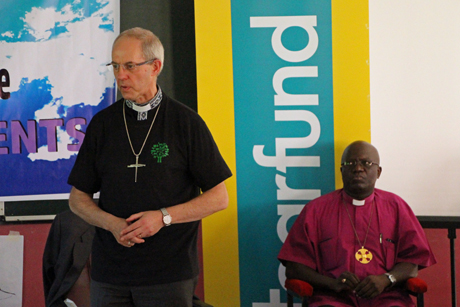 Later, responding to questions from the young people, he told them: “You are the Church of today, and the leaders of tomorrow. And tomorrow may not be far away.”

Naomi Foxwood, who works in the global advocacy department of Tearfund, explained that the agency had sponsored the conference because of their “passion to see the global church mobilised on issues of environment and poverty.”

She told ACNS: “We think that the Church has the potential to be absolutely transformative in a way that no other institution does. Firstly, because we have God and his power to do immeasurably more than we can ask or imagine; second because we have reach; and thirdly because we have a lot of passion, particularly among our young people.”

The young people invited to take part in the conference were already engaged in environmental campaigns in their local churches. One of the participants had set themselves a target of planting 1,000 trees by the end of the year, and had told Naomi Foxwood that “I’ve got to 850 so I’ll think I’ll exceed my target.”

She said that the strength of the programme was that the young participants were no longer working individually but had become part of an international network. “That’s how you build a movement,” she said, “lots of individual local actions being connected, having momentum and growing into something bigger.

“For young adults to see that the leadership of the Anglican Church, right up to the Archbishop, takes them seriously as youth; and takes our God-mandated obligation to care for the environment seriously – it just fuels them. I think they are going to out of here absolutely empowered, inspired and even more passionate.”