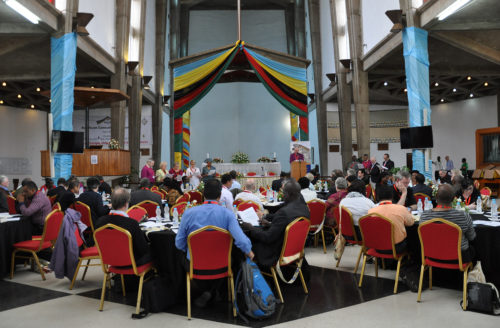 The 16th meeting of the Anglican Consultative Council began April 8 in the Cathedral of the Holy Cross in Lusaka, Zambia. Photo: Mary Frances Schjonberg/Episcopal News Service

[Episcopal News Service – Lusaka, Zambia] The Anglican Consultative Council members beginning their April 8-19 meeting here committed to working with Archbishop of Canterbury Justin Welby and the primates in the aftermath of the latter’s gathering during which they called for consequences for the Episcopal Church.

However, it was at least initially unclear exactly what that commitment entails or if all of the ACC members understand it in the same way.

Welby reported to the ACC members April 8 on the primates’ gathering, saying, “It is both my and the primates’ desire, hope and prayer that the ACC should also share in working through the consequences of our impaired relationships.”

The confusion came later when, following table discussions among the members, ACC vice chair Elizabeth Paver told the group that Welby did pose a “direct request from the primates to us.” 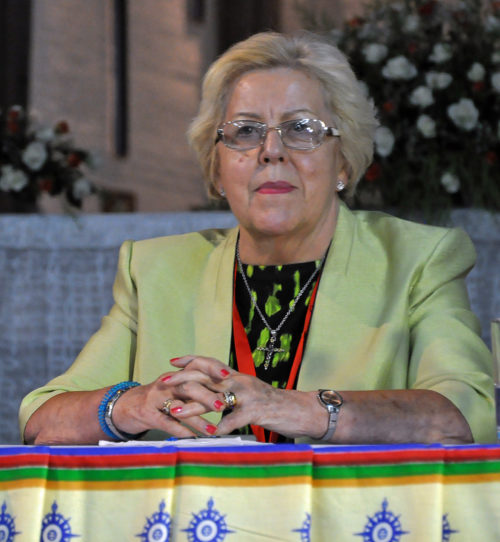 Anglican Consultative Council vice president Elizabeth Paver from the Church of England told a news conference April 8 that she had asked ACC members to commit “individually and collectively to work for the flourishing of all parts of the communion.” Photo: Mary Frances Schjonberg/Episcopal News Service

Therefore, she said, the leaders of the ACC “ask you, really, are you individually and collectively willing to work together for mutual flourishing and in relationships?”

“We decided that votes are … just divisive but we would like in Christian love and friendship in our Anglican way just to be able to say to our archbishop and affirm our beliefs as a body to work together with our primates on these difficult issues,” she continued. “If that be your will, would you just affirm it in an applause; if it is not, don’t.”

Scattered applause followed but not all members participated.

At a post-session news conference, held in the Anglican Cathedral of the Holy Cross where the ACC is meeting, Paver was asked to clarify the intent of her question and what she saw as its practical implications.

The question she put to the ACC members, she said, was whether they were “willing individually and collectively to work for the flourishing of all parts of the communion, particularly in relational terms, that we walk alongside each other and we affirm each other.

“And if the primates, who are our spiritual leaders, are prepared to do that through their difficulties, we wished just to give the members of the ACC an opportunity to say they too will put their efforts, their energies and their prayers and hopes in that, so this communion can stay together and flourish in all parts of the world.”

A majority of the leaders of the communion’s 38 provinces – known as primates – during their January gathering called for three years of “consequences” for the Episcopal Church in response to the 78th General Convention’s decision to change canonical language that defines marriage as being between a man and a woman (Resolution A036) and authorize two new marriage rites with language allowing them to be used by same-sex or opposite-sex couples (Resolution A054).

The primates said that they were “requiring” that for those three years the Episcopal Church not serve on ecumenical and interfaith bodies, not be appointed or elected to an internal standing committee, and “that while participating in the internal bodies of the Anglican Communion, they will not take part in decision-making on any issues pertaining to doctrine or polity.”

Welby, who spoke for 30 minutes, said that he had already acted where he has responsibility and ability to act. He has appointed the task group asked for by the primates to maintain conversation among themselves with the aim of restoring relationships and trust. That group, he said, has a “very wide” representation from across the communion of male and female laity and clergy.

The communion’s Standing Committee, which met in Lusaka April 6-7, said in a report to the ACC that it welcomed the task group. The members also “affirmed the relational links between the Instruments of Communion in which each Instrument, including the Anglican Consultative Council, forms its own views and has its own responsibilities.” 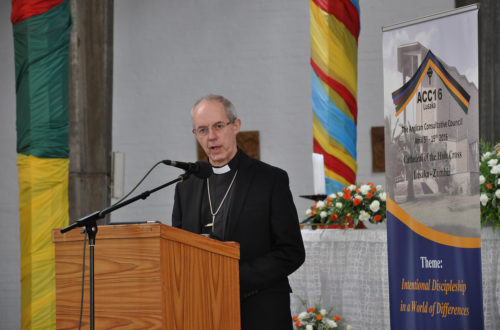 Archbishop of Canterbury Justin Welby April 8 reports to the Anglican Consultative Council about the January meeting of the communion’s leaders – known as primates – during which those leaders called for consequences on the Episcopal Church for its decision to allow same-sex marriage. Photo: Mary Frances Schjonberg/Episcopal News Service

Welby made no specific mention of his recent removal, as part of the consequences, of the two Episcopalians who had been serving on two ecumenical bodies. The Rev. Amy Richter had been serving on the International Reformed-Anglican Dialogue and the Rev. Katherine Grieb was a member of the communion’s Inter-Anglican Standing Commission on Unity, Faith and Order.

After Welby’s report, ACC members had a chance to ask clarifying questions. The only member who spoke was Episcopal Church of South Sudan and Sudan Archbishop Daniel Deng Bul Yak. He did not ask a question but instead spoke about his experience of the primates’ gathering, saying that “the spirit of God was in the room.

“The ACC have to support the initiative already led by the Archbishop of Canterbury that managed to bring the primates together and make one statement,” he said, adding that the ACC ought to adopt the primates’ actions “to keep the church of God together.”

The Episcopal Church’s three members are Connecticut Bishop Ian Douglas, whose term will end after this meeting; House of Deputies President the Rev. Gay Clark Jennings, attending her second meeting, and Diocese of the Virgin Islands Deputy Rosalie Ballentine, who was elected in June 2013 and thus attending her first meeting. Douglas is also finishing a term on the communion’s Standing Committee.

“Our province is a member [of the ACC] and so therefore it’s our responsibility to attend and participate as representatives from a member province,” Jennings said prior to the meeting’s start. “As a member of the Anglican Consultative Council, I am bound to follow the constitution.”

When, on April 8, ACC chair and retired Malawi Bishop James Tengatenga summarized the responsibilities of ACC members, the vast majority of whom are new to their role, he reminded them that the constitution requires their attendance at each meeting. Tengatenga had said earlier this year that the Episcopal Church members had the “right and responsibility” to attend the meeting and to vote.

However, a group of Episcopal bishops and priests known as the Communion Partners recently called on the church’s ACC members to voluntarily comply with the primates’ consequences.

Welby noted in his report to the ACC that the primates have “no legal authority over provinces” and that no one Instrument of Communion can make another instrument do or not do something.

The Anglican Communion exists when the relationships at all levels within it allow for mutual discernment and interdependence, he said.

The last ACC meeting received a 56-page report (beginning on page 33 here) about the relationships between the Instruments of Communion.

In a letter dated March 16, Welby told the 38 primates that “the decisions we took in January can only have effect if they gain general ownership in the Communion, taking in laity, priests and bishops.”

The first three days of the ACC’s meeting are titled “establishing the ACC Community,” but the community is lacking some of its members.

Four provincial leaders – Uganda Archbishop Stanley Ntagali, Nigerian Archbishop Nicholas Okoh, Kenyan Archbishop Eliud Wabukala and Rwandan Archbishop Onesphore Rwaje – have all said that their provinces will not send their ACC members to the meeting. (Ntagali’s statement is here, Okoh’s is here and Wabukala’s is here. Rwaje did not issue a statement about his decision.)

However, Kenya’s three ACC members have come to the meeting. Wabukala acknowledged that decision on April 6, claiming that those three members had “been encouraged to disregard my spiritual counsel and attend this meeting.”

“It seems that the rejection of the moral and spiritual authority of the Primates by the ACC Chairman, without public rebuke from the Archbishop of Canterbury, has become infectious and is encouraging further breakdown of godly order in the Communion,” he said in part.

In addition, Archbishop Mouneer Hanna Anis from Jerusalem and the Middle East, who is also a Standing Committee member, has refused to attend. He recently said he would not attend the ACC meeting or the April 6-7 Standing Committee meeting here because of what he saw as the Episcopal Church’s “disregard” of the primates’ “consequences.” Saying he “did not mind” that the Episcopal Church would attend the ACC meeting, he implied, without naming Connecticut’s Douglas, the Episcopal Church was not honoring the intent of the primates’ “consequences” which said no Episcopalian should be “appointed or elected” to any of the communion’s internal standing committee. The ACC elected Douglas in 2009 to be one of its representatives on the Standing Committee.

Ntagali, Okoh and Wabukala cited in part the Episcopal Church ACC members’ plans to participate fully in the Lusaka meeting and Tengatenga’s statement about their right to do so.

While some Anglican Communion-watching blogs have reported that Welby’s March 16 letter asked all 38 primates to attend the meeting, he did not actually make that appeal. Rather the archbishop wrote that that it is his hope and prayer that “every province that is able will be represented in Lusaka.”

Normally, primates attend ACC meetings only if they are on the Standing Committee. Then-Presiding Bishop Katharine Jefferts Schori attended in 2009 and 2012 in that capacity. West Indies Archbishop John Holder has been elected by his colleagues to succeed her and represent the Americas and the Caribbean. In addition to Anis, Archbishops Richard Clarke from Ireland, Philip Freier of Australia and Thabo Makgoba of Southern Africa are the other primatial members.

Thus, Presiding Bishop Curry is not at the meeting because he is not one of the church’s three ACC members, nor is he on the Standing Committee.

At this meeting, a few primates, such as Deng and Hong Kong Archbishop Paul Kwong are attending as provincial ACC members.