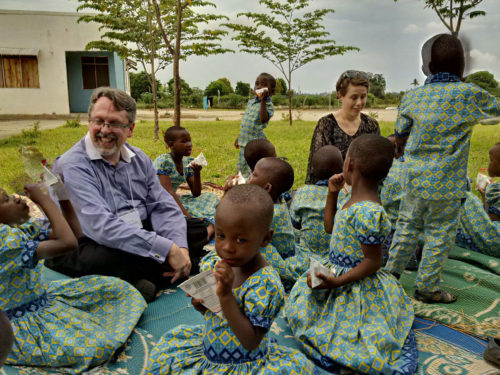 The Rev. C. K. Robertson, canon to Presiding Bishop Michael Curry for ministry beyond the Episcopal Church, and Rebecca Linder Blachly, the U.S. State Department’s senior policy advisor for Africa in the Office of Religion and Global Affairs, play with orphans at Valentine Orphanage April 2, during a group visit to outreach ministries of the Diocese of Dar es Salaam, Tanzania. Photo: Andrea Mann

Coming together to discuss challenges affecting the church and the world and seeking solutions reminded the Rev. Vicentia Kgabe, rector for The College of the Transfiguration in Grahamstown, South Africa, of the importance of community and of the richness of the Anglican Communion.

“The bonds of affection continue to get stronger,” said Kgabe. But the church, he added, needs to strengthen its voice in the world.

Twenty-three people representing six Anglican Communion provinces – Burundi, Central Africa, Southern Africa, Tanzania,West Africa, and the U.S.-based Episcopal Church – gathered for theMarch 30-April 3 conference aimed at developing a model of collaboration that will enable the provinces to carry one another’s burdens in mission. Throughout the conference, the group held in prayer neighboring Burundi, which is experiencing ongoing political conflict and violence.

The referenced verse, “Bear one another’s burdens and in this way you will fulfill the law of Christ,” undergirded the participants’ work and fellowship.

One of the most hopeful outcomes of the conference “is the realization and the recognition that we are part of each other as brothers and sisters in Christ,” said Bishop Brian Marajh of the Diocese of George in the Anglican Church of Southern Africa. He added that it is important to put this in the context of “where we find ourselves in the Anglican Communion … the Gospel imperative is to be a part, rather than being apart.” 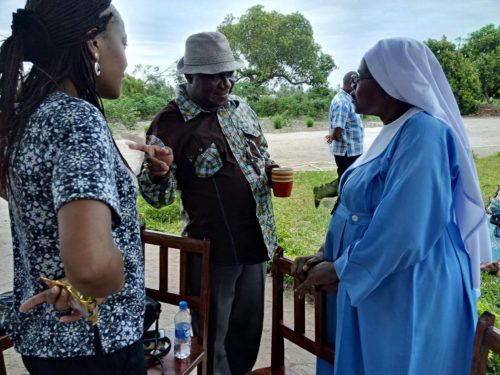 Patricia Kisare, the Episcopal Church’s Washington, D.C.-based officer for international affairs, and Bishop Jacob Ayeebo of Tamale, Anglican Church of Ghana, speak to one of the sisters from the Community of St. Mary, an order of the Anglican Church of Tanzania. Photo: Andrea Mann

Issues of human sexuality and same-sex marriage have strained relations in the Anglican Communion since the early 2000s.

In January, a majority of Anglican primates called for temporary “consequences” for the Episcopal Church, recommending that its participation in ecumenical dialogues and some Anglican Communion bodies be restricted. The primates’ actions at their gathering in Canterbury, England, were a response to the 2015 General Convention’s decisions to change canonical language defining marriage, and the authorization of marriage rites that would apply to both same- and opposite-sex couples.

The Galatians 6:2 Conference had been planned in advance of the primates’ gathering, in part in response to those longstanding differences, but also as an ongoing changing approach to missional relationships and partnerships between churches in the United States and Africa. The conference was conceived during an October 2014 meeting in New York City where the six primates in attendance set their intention to build missional partnerships among their churches.

“One of the greatest takeaways of this conference has been the strengthening of our relationships as members together of our global Anglican family,” said the Rev. Chuck K. Robertson, canon to Presiding Bishop Michael Curry for ministry beyond the Episcopal Church. Robertson participated in the Galatians 6:2 Conference as part of the Episcopal Church’s delegation. “In the sharing of our stories, in our deliberations and decisions, and in our common prayer, we have deepened the friendships and trust between us even as we commit ourselves anew to the crucial work before us all,” he added

“These people are interested in working in partnership, not in isolation,” said the Rev. Canon Isaac Kawuki-Mukasa, who works as an officer for Africa relations for both the Anglican Church of Canada and the Episcopal Church.

“Any time there is an opportunity for the communion to come together to work on important matters of mutual concern it’s a good thing,” said Mann, adding that this conference was of particular importance because participants were seeking to develop a model of collaboration intended to lead to provincial partnerships. “It’s a concrete implementation of a commission of primates to provinces to get going on something.”

Participants and facilitators are writing a letter to communicate the group’s findings and recommendations for future collaboration to the six primates. Participants included bishops, priests, deans and development officials, who throughout the conference worked in small groups and shared their stories and experiences as they discussed nine topics that were established in advance of the conference. The nine topics were: sustainability, health/environment, human trafficking/migration, theological education/religious freedom, and finance/pension.

At the outset of the conference participants entered into a covenant with one another to be fully present, to listen and to share their stories. It was through a generous spirit and storytelling that commonalities and connections began to form.

“Relationships have been formed, we are in each other’s road now,” said Bishop David Rice of the Diocese of San Joaquin in Central California. “This will allow us to do something with that, travel that road together, carry each other’s burdens.”

Despite existing differences in the Anglican Communion, as the Galatians Conference has shown, the communion has far more in common than what it disagrees about, said Mathews.

“We are going to continue to reach out in partnership based on common mission. We continue to believe that what holds us together is much stronger than what divides us,” he said. “It’s time we focus on what holds us together. This is a concrete example of moving forward, and that’s why it’s significant. For such a long time we have allowed others to define what we mean by partnership.”

The Galatians Conference was just one example of the ways the Episcopal Church and its primate, Presiding Bishop Michael Curry, remain in conversation with Anglican provinces in Africa. For example, Curry will travel to Accra, Ghana, in May for a meeting of the Consultation of Anglican Bishops in Dialogue, which began at the 2008 Lambeth Conference in response to differences over same-sex unions and larger questions of biblical interpretation.

The Galatians Conference took place a little more than a week in advance of the Anglican Consultative Council, which brings together up to three representatives of each province every three or four years, and is scheduled to meet April 8-19 in Zambia.