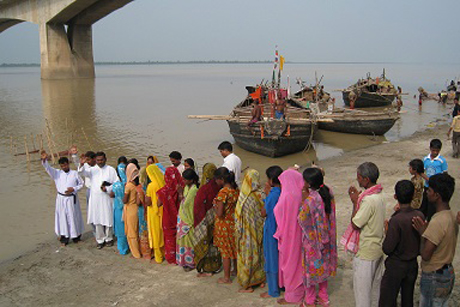 This image of baptisms in India has been chosen as the cover illustration of “Intentional Discipleship and Disciple-Making – An Anglican Guide for Christian Life and Formation,” a major new report from the Anglican Communion
Photo: Anglican Witness

[Anglican Communion News Service] An Anglican Communion-wide season of intentional discipleship should not be created to address poor church attendance, or to counter the challenge faced by churches with high attendance and low commitment. Instead, it should be “a response to the biblical call to make disciples to honor and glorify God, as Christians live out their faith in everyday life as faithful followers of Jesus Christ, their Lord and Master,” a major new report published by the Anglican Communion says.

Addressing those problems would, however, be “by products” of any period of focused intentional discipleship, which would also have “the potential to catalyze renewal and transformation in the Anglican Communion,” the report says.

The report, Intentional Discipleship and Disciple-Making – An Anglican Guide for Christian Life and Formation, has been published for members of the Anglican Consultative Council as they prepare to meet in Lusaka beginning next week. But, says the Rev. Canon John Kafwanka, the director for mission at the Anglican Communion Office, “this book is a text for everyone and should be accessible to the laity, ordinands, clergy, bishops, theologians and young people” throughout the Communion.

The 16th meeting of the Anglican Consultative Council (ACC-16) takes place in the Cathedral of the Holy Cross in Lusaka, Zambia, from April 8 until April 19. ACC-16 will bring together lay and ordained representatives from across the Anglican Communion “to facilitate the co-operative work of the churches of the Anglican Communion, exchange information between the provinces and churches, and help to co-ordinate common action.”

Its theme, “Intentional Discipleship in a World of differences”, was chosen by the Standing Committee after discussing a paper on discipleship which formed the basis of the new report, described by Archbishop of Canterbury Justin Welby as the “best document I have read on the subject.”

The report’s introduction explains that a Church Growth Initiative (now known as Anglican Witness: Evangelism and Church Growth Initiative of the Anglican Communion) was established following concerns expressed by the Lambeth Conference in 2008 and subsequent discussions at ACC-14 in Jamaica in 2009. The initiative was created to “spearhead research, thinking, and action within the Communion” on mission and discipleship.

The Archbishop of South East Asia, the Most Rev. Moon Hing, Bishop of West Malaysia, describes the biblical imperative to discipleship in the report’s foreword: “‘Follow me.’ These two simple words of invitation and command stand at the head of every relationship with Jesus, the Son of God, whether spoken on a Galilean lake shore, on the streets of Lusaka, or in a hospital in Chicago,” Archbishop Hing said. “Like every child responding to the outstretched hand of a parent, Simon and Andrew, Mary and Salome, and millions of Christians through two millennia have accepted that simple invitation in faith and often with minimal understanding of the life-transforming decision they have taken.”

He describes a decision to follow Christ as “simply the most challenging, the most beautiful, the most costly, the most rewarding journey we could ever choose to begin.”

The archbishop goes on to explain that reconciliation “becomes a pressing priority” for Christians as they are drawn deeper into the body of Christ. “Humanity shares the brokenness and pain of our world, and this needs to be brought to God, to be offered at the cross – to find reconciliation, wholeness, and life in the shattered life of God. As Paul reminds us, the heart of our discipleship is not only to ‘be reconciled’ with God but also to exercise a ‘ministry of reconciliation’ (2 Cor 5.11–21).

“That ministry is to be exercised within the church, in the wider community, and in our relationship with the whole created order. In many ways this life of reconciliation is the most public aspect of our Christian discipleship and at the same time deeply enmeshed with our witness, or evangelism.

“As a communion we are profoundly in need of reconciliation and we find ourselves in a world equally riven by fear, division, and brokenness. It is for this reason that, as never before, we need to accept Jesus’ invitation to an apostleship, a discipleship, of the whole of our lives. A narrow, pietistic attachment to Jesus, whether individualistic or ecclesial, was never what God intended and will not serve us well today.

“Following Jesus will and must change every aspect of our being. At the core will be our reconciliation with God, but this can never be complete until we are at peace with ourselves, in vital communion with the whole Body of Christ, in a renewed relationship with the whole human family, and discovering a new harmony with creation as a whole. Wrestling with environmental issues, with peace-building and peace-keeping, with the complexities of human relationships, with truth, justice, and loving, and with the care of our family and ourselves –these are all key concerns for those who accept the invitation of Jesus to ‘follow’.” 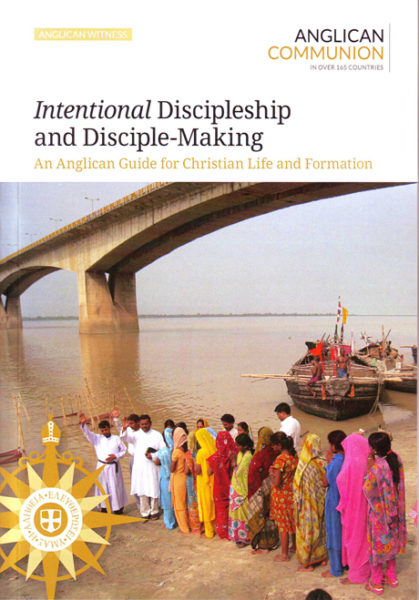 Kafwanka described the report as “a key resource” for next month’s meeting of the ACC, but added that “the ACC members will bring their own diverse but rich experience on how their faith is lived out and expressed as Christ’s ambassadors, how and what resources they have available in equipping themselves and their gathering communities in being the salt and light of world, and in proclaiming Christ as the hope of the world in these challenging times.”

He added: “My earnest hope is that ACC members will have a passionate discussion on this important theme and point to some future direction of how a communion committed on intentionally being disciples and making disciples of Jesus would do more in transforming communities with the love and the Gospel of Christ, and thereby bringing many more to love and follow Jesus Christ as his disciples.”

He said: “My hope and prayer is that, for some people, this book will be a challenging and welcome reminder to go back to the basics of where we should be a body of Christ and as individual Christians, and for others the book will be an inspiration and important companion on their journey of discipleship, and to others to discover that this so commonly used term, discipleship, is in fact the bedrock of our existence as followers of Jesus.”

Explaining the use of the word “intentional” to describe a type of discipleship, he said that: “Anglicans/Episcopalians all over the world are witnessing to Christ’s reconciling love in all sorts of ways as a sign of their discipleship. But there is also a renewed realization among many people that there is need to be more intentional and invest in ways of resourcing and equipping ourselves and those who join as new members to be lifelong disciples of Jesus in every sphere of our daily life.”

He said that having a Christian faith should “make a difference in ways Christians relate to one another and to the environment around them, including the choices they make [as they] love the world and respond to the various challenges [they face].

“In sense, there is already a movement of Anglicans/Episcopalians – and other Christians for that matter – who are committed to Christian discipleship. This ‘emerging’ and growing movement among Anglicans/Episcopalians in many dioceses is coming out of a renewed appreciation that as Christians, we are here for an important purpose, to honor God and our Lord Jesus Christ by the way leave our life, as Christ’s ambassadors; and that the need to focus on discipleship is the basic call to the Church and to all the baptized, and one which has the potential to make all the difference in a troubled but God’s world.

“So, I do pray that ACC will send out such rallying messages and call the Communion to intentional following and intentional equipping of all baptized Anglicans/Episcopalians to love Jesus and love the world. That is the ‘renewed discipleship movement’ I pray and hope for.

“This ACC has the potential to be a ‘springboard’ for a ‘discipleship movement’, which [Presiding] Bishop Michael Curry [of the Episcopal Church in America] often calls the Jesus Movement.”

The report, Intentional Discipleship and Disciple-Making – An Anglican Guide for Christian Life and Formation, can be purchased from the Anglican Communion Shop (available shortly), priced £6.50 GBP plus postage and packing; or downloaded as a PDF (148 pages) from the ACC-16 webpage.