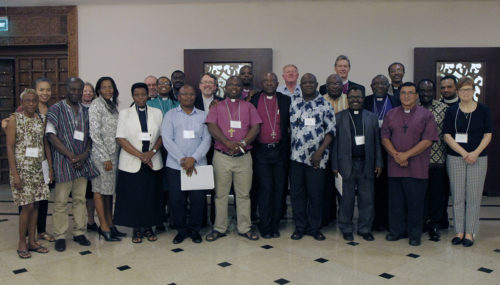 [Episcopal News Service – Dar es Salaam, Tanzania] Building trust through deep, intentional listening to one another’s stories, helps to create a space where Anglicans and Episcopalians can begin to, as Paul wrote in Galatians 6:2, “Bear one another’s burdens ….”

“You cannot become companions without creating the space where trust is developed,” said the Rev. Ranjit Mathews, the Episcopal Church’s Africa partnerships officer, who is helping to facilitate the Galatians 6:2 Conference underway here on Tanzania’s coast.

The idea for the Galatians 6:2 Conference has grown in part out of a larger conversation driven by theological differences regarding human sexuality and same-sex marriage in the Anglican Communion, as well as an ongoing changing approach to mission relationships and partnerships between churches in the United States and Africa.

In 2013, more than a decade after differences began to surface, Province of Burundi Archbishop Bernard Ntahoturi, who was then the general secretary of the Council of Anglican Provinces of Africa, suggested the Episcopal Church, through its silence, was allowing itself to be defined by others, particularly those who claimed its agenda was to promote homosexuality in Africa. He made his comments during a Global Anglican Future conference (GAFCON) in Nairobi, Kenya. In response to Ntahoturi’s comments, then-Presiding Bishop Katharine Jefferts Schori sent the Rt. Rev. Oge Beauvoir, bishop suffragan of the Diocese of Haiti, as a special envoy to visit three other East African provinces to discern how churches could continue to work in partnership despite their differences. Ntahoturi suggested churches interested in working with the Episcopal Church find a practical way forward.

Then in England in May 2014, the Fifth Consultation of Anglican Bishops in Dialogue, which brought together bishops from Africa and North America to work toward a deeper understanding of their common life in Christ in a diverse and global communion, suggested further conversation. The intentional dialogue in England was developed in response to those existing theological controversies, including issues related to human sexuality and same-sex blessings that have strained Anglican Communion relationships since the early 2000s.

In October 2014, the primates of the six provinces represented here at the Galatians 6:2 Conference met at The General Theological Seminary in New York City where they set an intention to build missional partnerships among their churches.

“The primates gathered together in that New York meeting made a point of looking beyond the differences that so often divide us and instead chose to recognize that we need one another and can accomplish much together as fellow Anglicans,” said the Rev. C. K. Robertson, canon to the Presiding Bishop for ministry beyond the Episcopal Church, during an interview with Episcopal News Service.

More recently, during the January 2016 meeting of Anglican primates in Canterbury, the majority of primates in attendance called for temporary “consequences” to be placed on the Episcopal Church in response to the 2015 General Convention’s decision to change canonical language that defines marriage as being between a man and a woman (Resolution A036) and authorize two new marriage rites with language allowing them to be used by same-sex or opposite-sex couples (Resolution A054). 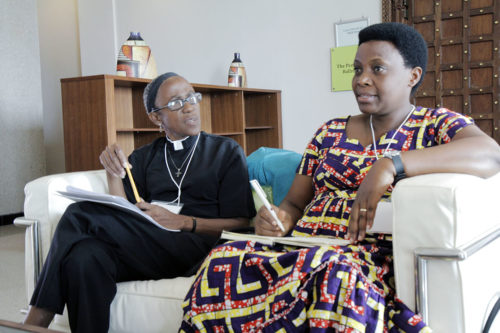 The Rev. Jenny Coley, left, an Episcopal Church-appointed missionary working on disease control and prevention in the Province of West Africa, and the Rev. Jeanne Ndimubakunzi, who heads the Province of Burundi’s program on preventing gender-based violence participate in a small working group discussion on health and the environment. Photo: Lynette Wilson/Episcopal News Service

“The Galatians 6:2 Conference is a reminder that we in the Episcopal Church remain vitally connected to our sisters and brothers in other parts of the Communion,” said Robertson, “and ties in with Presiding Bishop Michael Curry’s focus on the Jesus Movement themes of evangelism and reconciliation.”

Earlier this week, Curry referenced the conference’s theme during a March 29 call for a season of prayer for regions of the Anglican Communion that are experiencing violence and civil strife, including nearby Burundi, where a political crisis has led to hundreds of deaths and the displacement of 240,000 people to neighboring countries.

In New York, in 2014, the primates framed their conversation in the context of “human dignity and flourishing, the sustainability of common ministry and the care of the earth.” Moreover, they committed themselves to exploring pension schemes, resource and financial stewardship, health services, mining and related environmental issues, advocacy, migration and statelessness, human trafficking, religious freedom and theological education. This commitment conceived the themes for this conference’s working groups.

The working groups are continuing conversations focused on nine topics that were established in advance of the conference. The nine topics are: sustainability, health/environment, human trafficking/migration, theological education/religious freedom, and finance/pension. 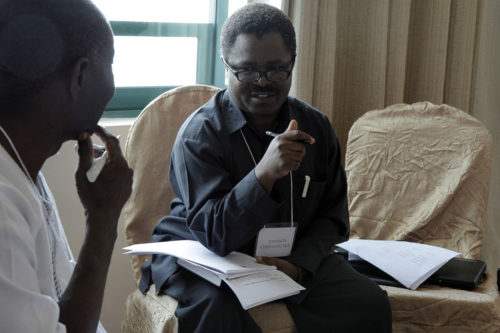 Bearing one another’s burdens also is a way of reorienting the traditional approach to missional partnerships, leading to relationships based in mutual respect and trust.

“It’s not just hearing, but active listening and being able to empathize with the other person,” said the Rev. Canon Isaac Kawuki-Mukasa, who works both as Anglican Church of Canada’s Africa relations coordinator and Africa relations for the Episcopal Church.

This is rooted in the 1963 Anglican Congress held in Toronto, Canada, that sought to transform the understanding of mission and relationships around the Anglican Communion.

“This requires constant practice,” said Mathews, adding that this listening is something that’s not common.

It is something, however, conference participants are modeling in their working groups as they begin to share their stories with one another.

In the afternoon, after the working groups finished the day’s discussions, common themes around access to and paying for theological education, building local awareness around the problem of human trafficking and the worldwide problem of forced displacement began to emerge.

Conference goals include working toward a comprehensive action plan for collaborative mission based on the work of the working groups.