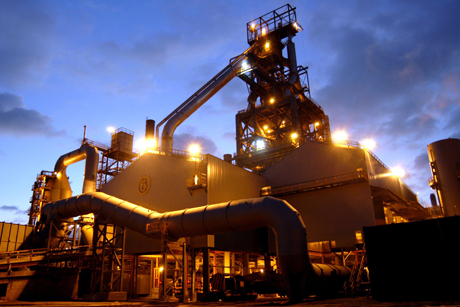 A blast furnace at the Tata Steel plant in Port Talbot, Wales. Around 4,000 jobs are at risk here, and a further 11,000 throughout the U.K. following Tata’s decision to divest of its U.K. operations Photo: Wikimedia

[Anglican Communion News Service] Leaders from the churches and chapels in the Welsh town of Port Talbot have formed an ecumenical ministry team to support thousands of local workers who could lose their jobs following the announcement that the Indian steel company Tata, which owns the majority of the U.K.’s steel works, is looking to divest from its operations in the country.

Tata made the announcement earlier this week, saying that the Tata Steel board “has advised the board of its European holding company – Tata Steel Europe – to explore all options for portfolio restructuring including the potential divestment of Tata Steel UK, in whole or in parts. Given the severity of the funding requirement in the foreseeable future, the Tata Steel Europe board will be advised to evaluate and implement the most feasible option in a time bound manner.”

The decision to closed its operations in the U.K. follows a crisis in the steel industry internationally caused by a combination of a downturn in construction projects following the financial collapse of 2008 and an over-supply of steel in the international markets as a result of what analysts say is the availability of large amounts of Chinese steel being sold below the cost of production. Tata says despite giving its U.K. business “substantial financial support”, it has “suffered asset impairment of more than £2 billion in the last five years.”

Britain’s nationalized steel industry was privatized in 1988 as British Steel PLC. Eleven years later it merged with the Dutch company Koninklijke Hoogovens to form Corus Group; which was brought by the Indian multinational company Tata Group in 2007.

As a result of the decision, some 15,000 people are at risk of losing their jobs – 4,000 of them at the Port Talbot plant which is Britain’s biggest steel works. The Port Talbot site is reported to be losing £1 million a day. If the sites do close, job losses could be considerably higher as jobs in the supply chain are also at risk.

“Local churches and chapels are supporting Tata workers through prayer and pastoral care and I am very pleased to have a ministry team on call to be with those workers feeling particularly stressed,” Tata’s chaplain, the Rev. Rick Hayes, said. “All the workers feel at risk at the moment and there is a lot of confusion and anxiety.”

The Vicar of Port Talbot, the Rev. Mark Williams, whose father was a project engineer at the steel works for 40 years, said his message to the steel workers was quite simply: “We’re walking alongside you.”

Williams added: “It’s too early to know yet what the best way for us to respond is and what practical help we can offer. However, we have just celebrated Easter, a time when we are reminded that there is hope in our despair. And as Jesus walked alongside followers on the road to Emmaus, so we are walking alongside the steelworkers, listening, praying and supporting them and offering them fresh hope.”

He said that the atmosphere in the town was one of both resignation and frustration. “Everyone knows things are going to change, that the steelworks can’t stay as they are. There is frustration because we don’t know what’s going to happen next – and that’s very raw at the moment.”

A ministry team of 16 leaders from the town’s churches and chapels are working alongside Tata’s chaplain to support people struggling with stress. They are offering debt advice through a Christians Against Poverty counselor and preparing food banks for anticipated extra demand.

The church leaders have also organized a special prayer service for the town at the Ebenezer Chapel April 24.