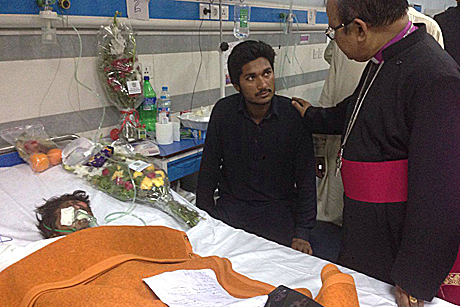 The Moderator of the Church of Pakistan, Bishop Samuel Azariah visits victims of Easter Sunday’s bomb blast in Lahore to support them and their families. Photo: Diocese of Raiwind

[Anglican Communion News Service] The prime minister of Pakistan has said that the heart of every Pakistani was broken and that the whole nation was in the state of grief and sorrow during a televised address to the nation following the horrific Easter Day bomb attack in Lahore that left at least 72 people dead and more than 300 injured.

The Taleban off-shoot Jamaat-ul-Ahrar has claimed responsibility for the suicide bombing, saying that the target of the attack was Christians celebrating Easter. But the indiscriminate nature of the suicide bombing, near the entrance to the women and children’s section of the Gulshan-e Iqbal park, meant that many more Muslims were killed and injured than Christians.

In his address, Prime Minister Muhammad Nawaz Sharif said the government would not allow the terrorists to resurface and play with the lives of people, the Associated Press of Pakistan news agency reported. “This is my resolve, my government’s resolve, as well as the resolve of 200 million people,” Sharif said. “Insha Allah (God willing), no terrorist can breach the wall of our determination.”

The bishop of Lahore, the Rt. Rev. Irfan Jamil, has asked the Anglican Communion to pray for the leadership of the Church in Pakistan as they seek to console the people. Speaking to ACNS, Bishop Jamil spoke about how he along with the Moderator of the Church of Pakistan, Bishop of Raiwind Samuel Azariah; and the former Bishop of Peshawar, Mano Rumalshah, visited the injured and their families in the Jinnah, Sheikh Zaid, and Services hospitals in Lahore; and had begun to visit the bereaved.

“We visited them [and] we prayed with the people . . . who [had been] taken to hospital and encouraged them,” he said. “We prayed for the patients and those people waiting outside. We consoled them and encouraged them. There were all sorts of people there. We also prayed for the doctors also and told them we are praying.” He said that the medical staff had a “hard job” to do under “very pressured” circumstances.

And he spoke of the “natural” feelings that families had in response to the attack: “People normally go [to the park] for recreation. Your children go there for recreation and then they come back with their bodies burned and so on…”

The bishops and other clergy and diocesan officials are continuing to offer support to all those affected by the terrorist attack; but the identities of all those killed and injured is not yet known.

“We will . . . make a second round [of visits to the hospitals],” he said, “and . . . we will go to the homes [of the bereaved] and console the people there” once they have been identified, he said. The bishops are making no distinction between Christians and Muslims. 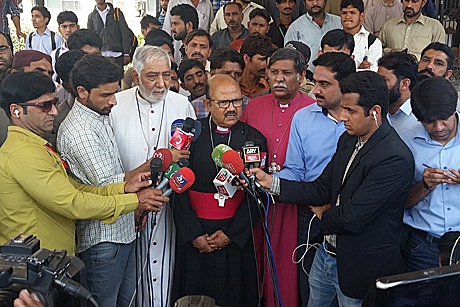 The Moderator of the Church of Pakistan, Bishop Samuel Azariah; the Bishop of Lahore, Irfan Jamil; and the former Bishop of Peshawar, Mano Rumalshah, speak to reporters after visiting victims of Easter Sunday’s bomb blast and their families. Photo: Diocese of Raiwind

Bishop Jamil asked the Anglican Communion to pray for the church leadership “who have to speak to encourage the people; for wisdom and guidance in . . . how we can console [the bereaved]. In the aftermath of the attack the bishops have spoken with a number of national and international media organizations. Bishop Jamil asks for prayer for “wisdom in how we say things.”

The secretary general of the Anglican Communion, Archbishop Josiah Idowu-Fearon, called on Christians throughout the world to pray for all the people of Pakistan. “The attack on Easter Sunday was not an attack on the Church, or Christians, or government institutions, or military facilities, or combatants. It was an attack, primarily, on ordinary women and children going about their ordinary leisure activities.

“Some were Christians celebrating Easter. Many were not. All had set out to enjoy time together as families in a play area. Many have now lost everything.

“There is not a lot that we can do; but we can stand in solidarity with the people of Pakistan, and with the Church of Pakistan; and we can pray to the Risen Lord Jesus to bring comfort to those who mourn and to bring healing to the many who are injured.”

In the aftermath of the attack, vigils have been held throughout the world, including an interfaith gathering at the Pakistani Consulate in Birmingham, England – a city which is home to a significant community of people of Pakistani heritage.

One of those who took part was the Rev. Jessica Foster, coordinator of the Church of England’s interfaith Near Neighbours’ project in Birmingham. “I think it is really important that we come together,” she told ITV News. “It affects the community that has deep roots in Birmingham. And it is important to say that every life matters. It doesn’t matter who it is, or who it is. Every life lost is a huge tragedy and we want to come and express our huge sympathy for everyone who has been killed or injured.”