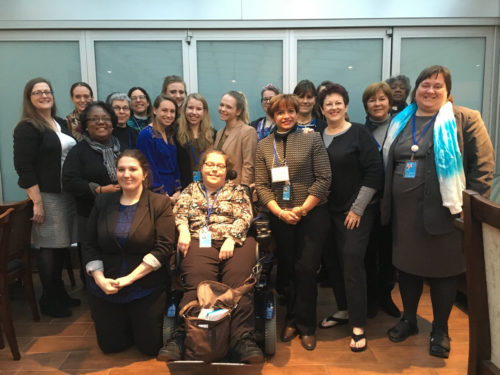 Episcopal delegates to the 60th annual United Nations Commission on the Status of Women gathered at the Hampton Inn a block and a half from U.N. headquarters on March 22 for advocacy training. Photo: Lynette Wilson/Episcopal News Service

[Episcopal News Service] The Episcopal delegation representing the church and its policies at the annual United Nations Commission on the Status of Women gathered on March 22 for an advocacy training designed to empower delegates to take the message home to their dioceses, churches and communities, and to engage others in the effort to “leave no one behind.”

As part of the exercise designed to take the issues discussed at the UNCSW down to national and local level, delegates were encouraged to choose an issue that particularly resonated with them, why it’s important and, in this case, what they would like to see policymakers do about it.

The point was “to think about the big issues in the local context,” said Jayce Hafner, the Episcopal Church’s domestic policy analyst who works out of the Washington, D.C.-based Office of Government Relations, who led the training at the Hampton Inn near the United Nations building in midtown Manhattan.

Advocacy, Hafner explained is about researching an issue, getting to know people affected by the issue, and about building and maintaining relationships with policymakers and their staffs.

“You don’t have to be an expert to be a good advocate for an issue,” she said, adding that Episcopalians can look to the Episcopal Public Policy Network as a resource.

Half of the delegates representing dioceses throughout the Episcopal Church said they already are engaged in advocacy at the local and/or national levels.

For example, the Rev. Connie Sanchez, of the Diocese of Honduras, shared an example of how the Episcopal Church and its ecumenical partners have worked for years on behalf of building awareness and protecting the rights of people living with HIV in Honduras.

Women from across the Episcopal Church and throughout the Anglican Communion representing more than 20 countries have been gathered in New York for the 60th session of the UNCSW March 14-­­­­­­­24.

“This year’s UNCSW has been all about the implementation of the 2030 Agenda and the Sustainable Development Goals,” said Main, following the March 22 advocacy training, adding that “leave no one behind” has been a constant refrain. “As civil society we are being urged to ensure that implementation happens on the national level.”

As Main pointed out at the start of the two-week commission: “What happens at the UNCSW is only as good as what happens at home.”

The Episcopal Church is one of a number of “civil society,” meaning non-government and non-profit organizations, and individuals engaged in advocacy and activist work, represented at the United Nations.

Events included an offsite panel focused on sustainable development tools for women and girls; a speech by the secretary general of the Anglican Communion focused on how women can work together to change the fate of women and girls in their communities; and a presentation by an expert on women’s contributions to peacemaking  talked about women claiming their places in decision-making spaces.  Presiding Bishop Michael Curry preached during a special Eucharist on March 17.

Last fall, the Episcopal Church submitted a statement to the UNCSW identifying four ongoing challenges and asking member states “to swiftly adopt and implement legislation on the following urgent needs”: to enable women to access power and decision-making positions; to foster women’s and girls’ economic empowerment and independence; to eradicate violence against women and girls; and to provide preferential treatment to marginalized women and girls.

The presiding bishop determined the Episcopal Church’s official advocacy priorities based on General Convention and Executive Council resolutions and the church’s position on issues such as human trafficking and gender-based violence in relation to conversations currently underway at the U.N.

Jennifer Allen, a delegate from the Diocese of Kansas, said in an interview with Episcopal News Service at the Church Center at the start of the two-week commission that the Episcopal Church’s four priorities fit with her lay ministry both at home and in Kenya, where she works on issues of women’s empowerment, inequality, access to healthcare and elimination of gender-based violence.

After participating in more than a weeks’ worth of advocacy, panel discussions and other events, Allen said she’d come to realize that gender equity is a component of each of the 17 Sustainable Development Goals and necessary for the success of the 2030 development agenda.

On a more immediate, practical level, she said, when she returns to Kansas, where in addition to being involved in the church, she’s a registered nurse, she will look to leverage her and grow her network because this is work that she cannot do alone.