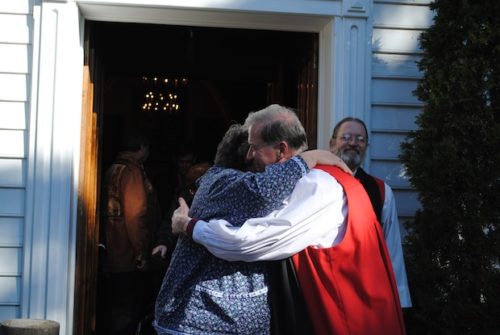 “Let your ‘yes’ be yes,” said Archbishop Fred Hiltz, primate of the Anglican Church of Canada, quoting James 5:12 as silence descended over the congregation gathered at the Mohawk Chapel.

“This strikes me as good counsel for the church of our day, as it seeks to act on decisions made at General Synod 2010 repudiating the Doctrine of Discovery and endorsing the UN Declaration on the Rights of Indigenous Peoples,” said Hiltz. “Here we have a call to let our ‘yes’ in that historic moment be a resounding and continuing ‘yes.’ ”

The light filtering in through stained glass windows depicting events from the history of the Six Nations and their relationship to Christianity fell on a diverse group — including former Indian residential school students, bishops and clergy. All had gathered to hear what Hiltz would say in response to the 48th of the 94 Calls to Action released following the close of the Truth and Reconciliation Commission (TRC) in June 2015, requiring, among other things, that religious denominations and faith groups in Canada issue a statement no later than March 31, 2016 “as to how they will implement the United Nations Declaration on the Rights of Indigenous Peoples (UNDRIP).”

In a ceremony that began with drumming, smudging and a prayer of welcome in Mohawk by Mike Montour, a teacher from the nearby Six Nations on the Grand River territory, Hiltz read a statement outlining some of the steps the Canadian church will take to show its commitment to the declaration’s 46 articles—from anti-racism training, to education about the harmful legacy of the Doctrine of Discovery, to renewed support for “lasting self-determination for the Indigenous church.” (The 46 articles cover rights to land, language, culture and religious practice, among other matters.)

Hiltz also suggested that the UNDRIP be incorporated into the liturgical life of the church through inclusion in the General Synod Handbook, integration into preparation materials for baptism and confirmation, and an annual reading of the document in every parish across the country on the Sunday nearest National Aboriginal Day (June 21).

In order to ensure that the church continues to “comply with the principles, norms and standards of the U.N. Declaration,” Hiltz announced that, in consultation with National Indigenous Bishop Mark MacDonald and General Secretary Archdeacon Michael Thompson, he would commission a Council of Elders and Youth to monitor the church’s commitment to the declaration.

But in order for such changes to gain traction in the church, Hiltz acknowledged that they would need to be adopted by the bishops.

“By virtue of their office, they are a unique position to help us,” he said, noting that bishops can speak not only to their own dioceses but also to the secular authorities within their communities. “I will be inviting the bishops to share initiatives in this regard at our meeting this fall.”

The need for a more general buy-in from across the church was a point stressed by Donna Bomberry, former Indigenous ministries co-ordinator for General Synod, secretary general of the Anglican Indigenous Network and Cayuga nation member, in her formal response to Hiltz’s statement.

“It is critical that the bishops get on board with this,” she said. “I agree that, as you say, the bishops are in a unique position to provide that leadership and guidance to encourage their dioceses, territories and municipalities to endorse the declaration.”

In an interview following the service, Bishop Robert Bennett of the Diocese or Huron, whose jurisdiction includes the Mohawk Chapel and a number of First Nations territories, said he agreed with the need for co-operation from bishops and noted that his own diocese has an Indigenous council that is helping it move to a “new relationship.” He conceded, however, that many regular parishioners have not been adequately prepared for these conversations.

Bennett stressed the importance of “consciousness-raising” at the grassroots level to educate parishioners.

He also noted that some of the specific suggestions Hiltz outlined — in particular, the idea of having the UNDRIP read during a Sunday morning service — struck him as being somewhat impractical, but he said he supported the “principle,” and would work to find more “reasonable” ways to incorporate it into parish life.

Bishop Michael Bird of the neighbouring Diocese of Niagara, who was also present at the service, said that while his diocese has “neglected” urban ministry to First Nations and Indigenous people, when the question of how they should respond to the TRC’s recommendations came up at the diocesan synod, he was “overwhelmed” by the number of people who wanted to get involved.

“We are ready and willing to comply fully with what the primate is asking us to do,” he said. “I sense that there will be a great deal of interest and follow-through in the diocese.”

But how will this statement be received in Indigenous churches and communities? The Rev. Norm Casey, a Mi’kmaq priest serving the Anglican churches on the Six Nations on the Grand River territory, said it will partially be a matter of how it is communicated.

“Everything that happens in our community is in relationship,” he explained. “They view the church through me. So it depends on how I am going to continue to share this information with my people in our community — how they hear that, how they digest it, what they are going to do with it, happens mostly from what I’m going to do.”

Casey said the primate’s message “really enforces everything that [Indigenous Anglicans] have been talking about for the last 15 years.”

Bishop Mark MacDonald said that while he thinks that Indigenous people are “far from where we need to be,” he has a lot of hope for the future.

“We’re at, I think, a tipping point, in terms of people’s perception and consciousness and this spiritual revolution that needs to happen in order to make Canada what it is destined to be in God’s eyes,” he said. “We’re on our way.”

In addition to Bennett, Bird and MacDonald, the service was attended by Archbishop (ret.) Terry Finlay, co-convenor of the Primate’s Commission on the Doctrine of Discovery, Diocesan Indigenous Bishop of Missinipi Adam Halkett, Spiritual Ministry of Mishamikoweesh Bishop Lydia Mamakwa and former Bishop of Montreal Barry Clarke.