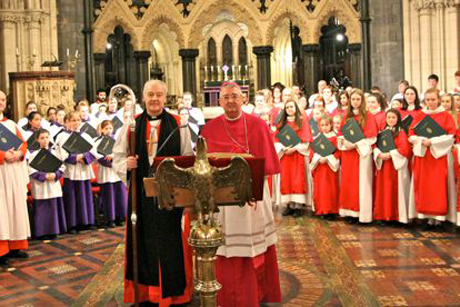 [Anglican Communion News Service] The Church of Ireland and Roman Catholic Archbishops of Dublin joined the Choirs of Christ Church Cathedral and the Girls’ Choir of St Mary’s Pro-Cathedral, took part in a united service on the eve of St Patrick’s Day to convey a powerful message of Christian unity. The service, on Wednesday evening this week, united the choirs’ voices united for “a magnificent and historic Festal Choral Evensong.”

The service was led by Archbishop Michael Jackson and Archbishop Diarmuid Martin and was the brainchild of Christ Church Cathedral’s director of music, Ian Keatley.

Keatley grew up in the context of the Troubles in Northern Ireland and “has always been inspired by the way in which the Feast of St Patrick creates a strong and positive sense of unity throughout the island of Ireland,” the Church of Ireland said in a statement.

In his sermon, Archbishop Jackson said that St Patrick had brought everyone together in the cathedral for a celebration of the gift of faith given by God to the people of Ireland. He said that the contribution of a faith tradition to any country was hard to gauge and in the Ireland of today it was difficult to see anything other than a decline in religion.

“This is an extremely dangerous place to be and to settle down for the evening because it means that our custodianship of the tradition does not get a chance to breathe into the society of today with the freshness it deserves,” he said. “We do a disservice to others and to ourselves. This caution is of a piece with what I keep telling myself in my day-to-day work: It is not about me, it is about them; and also with what I tell to those who work with me: It is not about you, it is about them,” the Archbishop said.

“Every generation deserves to get a chance to live by faith and it is a large part of our role as Christian people to lay these chances before others and to learn from their discernment of the same chances which we have failed to spot. Our purpose is, in that old-fashioned word, to convict them: to convict, that is to convince and to persuade and to assure, them of three things about the Christian Faith: its compassion, its courage and its coherence,” he continued.

“It is when we identify ourselves as sinners that we truly appreciate the abundance of the infinite mercy of God,” the Archbishop said. “No human sin can prevail or limit the mercy of God. One who considers himself in the first place a sinner can never be harsh or arrogant in his judgement of others.”