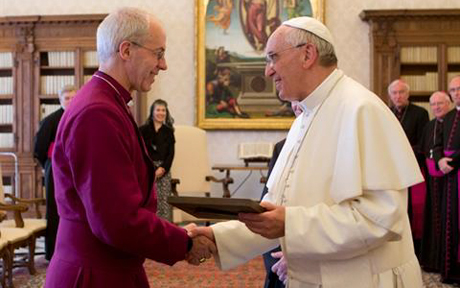 Meetings between Popes and Archbishops of Canterbury, as seen here when Archbishop Justin Welby met Pope Francis at the Vatican in 2013, are no longer unusual; but the public meeting between Archbishop Ramsey and Pope Paul VI in the Sistine Chapel 50 years ago – on 23 March 1966 – was the first since the Reformation. Photo: Lambeth Palace

[Anglican Communion News Service] The historic first official meeting since the Reformation between a Pope and an Archbishop of Canterbury fifty years ago; and with it the dedication of the Anglican Centre of Rome, is being celebrated with a host of events that will take place throughout the year.

Pope Paul VI and Archbishop Michael Ramsey met twice on 22 March 1996 and again the following day. The first meeting took place in the morning in the Sistine Chapel. Formal addresses were given and gifts exchanged.

The Pope gave Archbishop Ramsey a 12th century fresco of Christ in Glory from a church in the north of Italy. It now hangs in the Crypt Chapel at Lambeth. They met again in the afternoon for private talks in the Pope’s library. The following day there was a service in the Church of St Paul without the Walls during which there was a common declaration and a gift of a ring from Pope Paul VI to Archbishop Ramsey.

The meeting paved the way for the creation of the first official process of dialogue between Anglicans and the Vatican since the Reformation – the Anglican Roman Catholic International Commission (ARCIC).

The Anglican Centre in Rome was dedicated on 22 March 1966; it opened a few months later. “The Anglican Communion cherishes the Holy Scriptures and the Catholic Creeds,” Archbishop Ramsey said in a short speech at the dedication ceremony. “In history, it values the lessons of the Reformation of the sixteenth century, and it values no less the continuity which it claims with the ancient church.

“In spirituality, it learns from saints and teachers of its own, while it also tries to learn from saints and teachers of every period in the West and in the East. In theology, it learns from the Scriptures, the ancient fathers and the liturgy, while it strives to use whatever light is shed by modern knowledge upon the understanding of man and the world.

“The Anglican student is often a debtor to writers within the Roman Catholic Church. This Centre is an attempt to repay that debt by making available the resources of Anglican learning to any who will come and enjoy them.”

To mark the anniversary of the dedication, a special Eucharist will be celebrated at the Church of St Andrew by the Wardrobe in the City of London. The Celebrant will be the Archdeacon of London, assisted by the associate director of the Anglican Centre in Rome, the Revd Marcus Walker. The former governor of the centre, and current secretary, the Revd Barry Nichols, will preach.

Anglicans around the world are being asked to pray for the work of the centre on Sunday 29 May – which has been designated as an Anglican Communion Day of Prayer for the Anglican Centre in Rome. The date has been chosen as the Sunday nearest the feast-day of Saint Augustine of Canterbury.

A special choral evensong to mark the anniversary will be held in Westminster Abbey on Tuesday 14 June. The Archbishop of Canterbury, Justin Welby, will preach at the service.

And a two-day meeting will be held in Rome from Wednesday 5 and Thursday 6 October to mark the 50th anniversary of the opening of the Anglican Centre in Rome by Cardinal Willebrands. Details of the programme for that event will be released later.