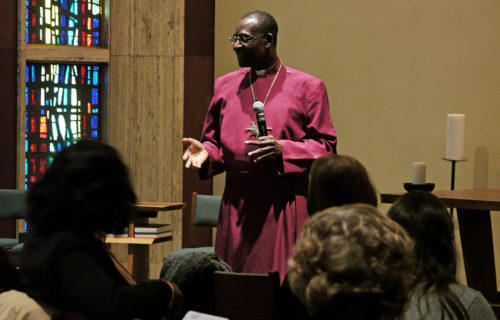 Women ought to encourage their husbands and other men to join them to eradicate gender-based violence, the Most Rev. Josiah Atkins Idowu-Fearon tells Anglican and Episcopal women gathered March 16 in the Chapel of Christ the Lord at the Episcopal Church Center in New York. The speech by the Anglican Communion’s secretary general came during an event related to the 60th session of the United Nations Commission on the Status of Women. Photo: Mary Frances Schjonberg

[Episcopal News Service] The secretary general of the Anglican Communion said March 16 that Anglican and Episcopal women must continue – and redouble – their work to change the fate of women and girls in their communities, including by working with their national and local governments.

“Sisters, opportunities are many, but we cannot afford to sit still and wait for things to happen,” said the Most Rev. Josiah Atkins Idowu-Fearon, speaking in the Chapel of Christ the Lord at the Episcopal Church Center in New York in an event related to the 60th session of the United Nations Commission on the Status of Women. “We need to keep knocking on the doors of U.N. agencies and governments, and be ready to show what we can do and how we can be effective partners in terms they can respect.

“Anglicans are on the ground, serving their communities in over 165 countries,” he said. “We have countries where we are an established church. We must speak up for the people we serve at the grassroots level because we know what they need in order to develop and to thrive.”

Women from across the Episcopal Church and throughout the Anglican Communion representing more than 20 countries have come to New York to attend the March 14-24 UNCSW session and parallel events such as Idowu-Fearon’s presentation.

Idowu-Fearon said he was grateful that the UNCSW afforded the chance for Anglican voices to be heard at the highest levels of international government. “And by ‘Anglican’ I mean the Episcopal Church as well,” he added.

He said he hoped that when the delegates returned home, they could find like-minded people and “form a little group within your provinces in order to make the ripple effects go farther.

“That kind of advocacy, my sisters, requires capacity,” he said. “It requires us to be intentional about telling our stories and showing in concrete terms the difference we can make in our unity. It means being courageous and speaking truth to power.”

Idowu-Fearon acknowledged during his speech that in many contexts, including some parts of Africa, “religion can be a stumbling block to change.” Earlier that day, he said, he learned “to my horror” that the parliament in his home country of Nigeria had defeated gender equality legislation for the third time. Opponents claimed that the proposed law violated Nigerian cultural norms as well as both the Bible and the Quran.

He also recalled attending a meeting of the Nigerian provincial standing committee in 2003 after the Episcopal Church had agreed to ordain openly gay Episcopal priest Gene Robinson as the bishop of New Hampshire. During that meeting, the U.N.’s Millennium Development Goals, adopted in 2000, were being discussed. A senior bishop declared that the development goals are “ways of the West wanting to poison our minds and remove us from focusing on the gospel.” Idowu-Fearon said the bishop refused to back down when he challenged him.

“You see what ignorance does? That’s ignorance,” he said, “but, I thank God that even though Nigeria did not buy into it, other parts of the communion were fully into it.”

Idowu-Fearon was the bishop of Kaduna in the Church of Nigeria for 17 years before he became the communion’s secretary general in July. He also served as archbishop of the Nigerian church’s province of Kaduna from 2002-2009. He has a global reputation for his expertise in Christian-Muslim relations.

He said Anglican and Episcopal women, as disciples of Jesus, can promote change by teaching and preaching about sustainable development for all women as well as “modeling the attitudes and behavior we want to see.” They must also be “prophets in our time” and advocates and gender champions at all levels of community. And, they must “pay attention on the ground to those who are being left out.”

While people of faith can and should challenge cultural norms, Idowu-Fearon acknowledged “with a heavy heart” that “our churches are buried in the past and, in so many cases, still failing to recognize the equal God-given dignity and giftedness of women and men.” He noted that he comes from a province in which women cannot be ordained and are not given “full leadership roles in the church.” In addition, he said, work is needed to ensure that lay voices are heard “as an essential part of the Anglican dialogue.” 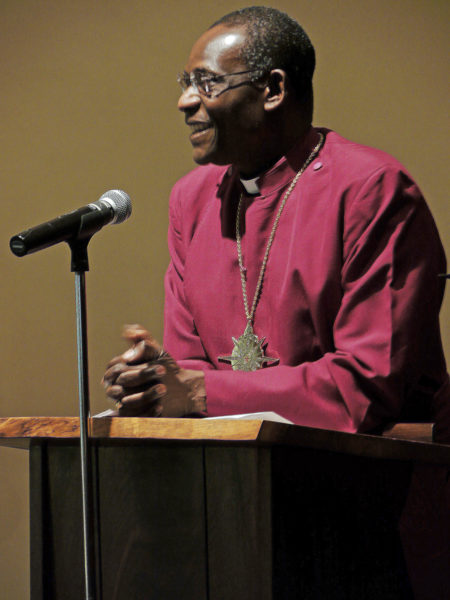 “We must speak up for the people we serve at the grassroots level,” the Most Rev. Josiah Atkins Idowu-Fearon tells Anglican and Episcopal women meeting March 16 in the Chapel of Christ the Lord at the Episcopal Church Center in New York. Photo: Mary Frances Schjonberg

In his presentation, Idowu-Fearon repeatedly referred to the roles that the wives of bishops and clergy have to play in changing attitudes in their provinces. Noting that Anglican women are very involved in the church, especially in Africa, he said “bishops’ wives are bishops to the women, clergy wives are clergy to the women.”

During a question-and-answer session, two women challenged Idowu-Fearon about the focus of the recent primates gathering on internal issues.

“Each time you meet as primates you have specific agendas and you seem to fight and there’s so much tension – so much conflict – and we hold our breath because we don’t know what is going to come out of your meetings. And yet, there is so much injustice happening in the world, so much that we could be working on,” said Ashella Ndhlovu Chama of Zambia.

Chama challenged Idowu-Fearon and the primates of the Anglican Communion to be seen participating in the White Ribbon Campaign of men and boys working to end male violence against women and girls.

Reminding the secretary general of the influence of bishops, especially in Africa, she said, “We want you to use that influence because if you come out there (at the end of the next Primates Meeting) in your robes … and you have a fantastic picture and all of you are wearing white ribbons, you would be amazed at how that message will get out.”

Clergy must speak from the pulpit against the violent treatment of women and girls, instead of allowing it to go on by being silent, Chama said. “We’ve got to see more of that happening and it has to start from the top. So, while we are working, while we are sweating it out and trying to make things work from the ground, we want to see things happening at the top, trickling down,” she said.

As the audience applauded her remarks, Idowu-Fearon said, “Hmm, okay, sure, I agree with you.”

“If you can convince your husbands to wear that ribbon, it will make a difference,” he added, and referred to the role of the wives of bishops and clergy in the work of ending silence.

Citing the example of a conference offered in Africa by Caroline Welby, the wife of Archbishop of Canterbury Justin Welby, Idowu-Fearon said such meetings were “another way of doing what you are talking about here – because when women meet, things you share amongst yourselves are much deeper and beneficial to us because some of the wives go back and share with their husbands.”

“So, we will try to talk with the primates and the bishops but you also have this role to play” because you have to go back home and share the experience of meetings like this with your colleagues, Idowu-Fearon said.

Then, Cynthia Katsarelis, Episcopal Church delegate from the Diocese of Colorado, stood to say she supported Chama’s comments “in the strongest possible terms about what we should focus on and I am not going to let the primates off the hook.”

Telling Idowu-Fearon that she is a lesbian who was married in the Episcopal Church, Katsarelis said, “I’m not your problem.”

Katsarelis said she has been “graced with this abundance,” especially during the many times when “hateful rhetoric” was directed against her.

“Every time, who saved me? God,” she told the secretary general. “Don’t worry about me. God’s taking care of me and all of us here.”

She asked Idowu-Fearon not to let the conflict at the primates’ level be used “as an excuse not to address the suffering hunger and pain of this world.”

As Katsarelis sat down to loud applause, Idowu-Fearon said “Thank you.”

More ENS coverage of Anglican and Episcopal women’s participation in the UNCSW is here.