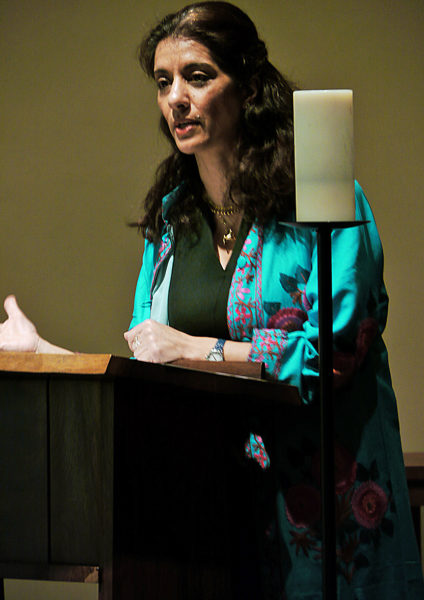 Sanam Naraghi-Anderlini tells a gathering in the Chapel of Christ the Lord at the Episcopal Church Center on March 16 that women’s experiences and voices are often discarded and erased from decision-making processes and even from history. Photo: Mary Frances Schjonberg/Episcopal News Service

[Episcopal News Service] For centuries and all over the world, women have always worked for peace and, while their skills are more needed now than ever, one peacemaker says women’s stories and their abilities have been discounted and erased.

Sanam Naraghi-Anderlini, co-founder and executive director of the Washington, D.C.-based International Civil Society Action Network, told a March 16 gathering at the Episcopal Church Center in New York that the rulers of the world – political and otherwise – do not acknowledge the basic fact that “when you look across time and geography when women collectively organize as women, they don’t use violence.”

“We might be disrupters; we might have a level of militancy but it’s not as if you have guerilla groups of women,” said, Naraghi-Anderlini, also an adjunct professor at Georgetown University, who in 2011, was the first senior expert on gender and inclusion on the United Nations’ Mediation Standby Team. Naraghi-Anderlini was born in Iran and educated in England at Oxford and Cambridge.

The March 16 gathering was connected to the 60th session of the United Nations Commission on the Status of Women March 14-24. Women from across the Episcopal Church and throughout the Anglican Communion representing more than 20 countries have come to New York to attend the session and various parallel events such as Naraghi-Anderlini’s presentation.

Her point about the peace-making role of women was vividly described during a question and answer session when Claudette Kigeme, the national coordinator for the Mother’s Union in Burundi, said women in her country are crying out for peace and for the protection of unarmed people, but they are speaking in a country “where truth cannot be said.”

Naraghi-Anderlini said that as the U.N. lives its stated mandate of peacemaking, it must begin by paying attention to the people of its member states rather to the governments of those states, to whom the organization currently “kowtows.” And that attention needs to be paid in a coherent way that does not let other countries claim to be poised to help a trouble country when in fact they are simply pursuing their own agenda, she added.

Also, she asked Kigeme, “What are the channels of access and influence that you have as an Anglican Communion” to address the ongoing conflict in Burundi. “How do you get your church leaders and others to raise these issues? Who’s whispering what to whom?”

Naraghi-Anderlini warned that those in authority will often try to distract women from their goals. “What I see all the time is that they try to depoliticize us because this is really about women getting into the most exclusive male spaces” she said, the spaces of military men and high-level male politicians who “are making decisions for the future of the lives millions of people.”

“And, as women, we are saying: ‘Excuse me; we want to have a space at the table.’ And they try to depoliticize us and throw us back into those social issues” and away from “the big decision-making spaces” where major political and security decisions are weighed.

In her wide-ranging presentation, Naraghi-Anderlini also discussed what she said were the tensions inherent in living in a world that is more pluralistic than it has ever been, and where communications technology does not allow countries to hide conflicts between their stated values and their actions.

As nations struggle to build a common identity amid growing diversity in which many groups practice identity-based politics, “a minority of extreme, exclusionary, violent groups is  are filling the void that others have not,” she said.

“Extremism has gone mainstream,” Naraghi-Anderlini said. “And in this country we have to watch out because we’re seeing it in our election campaign that when you start saying stuff about people and demonizing them, you don’t know what that will do.” 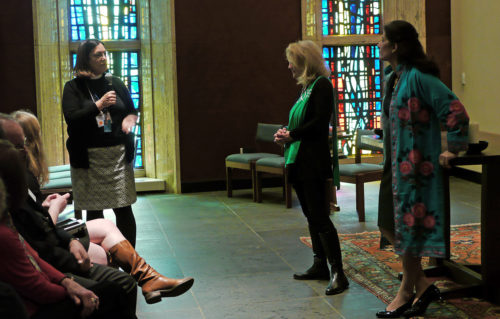 The Rev. Valerie Webster, left, an Episcopal Church delegate to the UNCSW from Montana, comments during a question and answer session March 16 with Sanam Naraghi-Anderlin, right, in the Chapel of Christ the Lord at the Episcopal Church Center. Beth Adamson, center, facilitated the discussion. Photo: Mary Frances Schjonberg/Episcopal News Service

The UNCSW serves to promote women’s rights in political, economic, civil, social and educational fields, and to make recommendations on urgent problems regarding women’s rights. The conference has convened annually or biannually since 1946; it reached a turning point in Beijing in 1995 when it adopted a global policy framework for gender equality and the empowerment of women that identified 12 areas of critical concern.

The theme for the 60th annual UNCSW is “Women’s empowerment and its link to sustainable development,” and the review theme carried over from the 57th session is “The elimination and prevention of all forms of violence against women and girls,” which includes a framework for addressing, preventing and responding to violence against women and girls.

Anglican and Episcopal delegates will also participate in Ecumenical Women’s advocacy, including training, ecumenical worship, visiting permanent missions at the United Nations, and continuing advocacy upon return to their local communities.