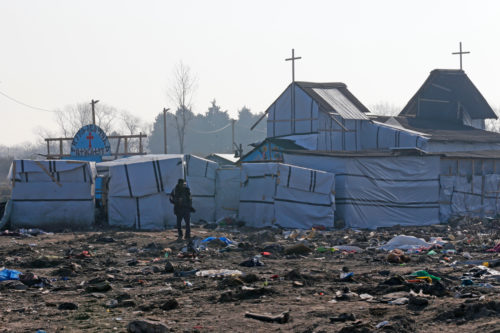 A refugee walks past the church in the dismantled area of the camp called the “Jungle,” in Calais, France, March 14. REUTERS/Pascal Rossignol

[Episcopal News Service] When Regan du Closel visited Calais’ infamous “Jungle” in October, she was deeply disturbed by the conditions in the makeshift refugee camp. Then as she learned more about the refugees – some of whom routinely risked their lives in the hope of one day reaching the U.K. – it was clear that to them this temporary shelter, however miserable, was better than most of the alternatives.

Most of all, Closel was struck by their strength and dignity as survivors. 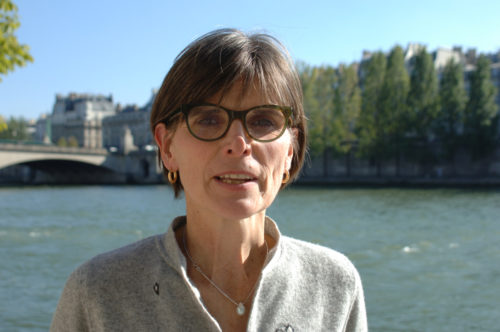 So when news broke that the French authorities had begun dismantling parts of the camp in early March, and that many of the Jungle’s 6,000 refugees would be evicted, Closel knew she needed to respond.

“The partial closing of the Jungle … is a source of tension, anguish, and misunderstanding to many of the refugees,” said Closel, a lay member at the Cathedral of the Holy Trinity in Paris, where she and fellow parishioner Thomas Girty have organized a compassionate and material response to the needs of refugees arriving in France after fleeing persecution and civil war in their home countries.

“As a Christian, one is struck by how often Christ himself turned towards the stranger, the foreigner, the outcast, and how he himself was born and grew up on the road of exile,” said Closel. “Is it not our role as Christians … ‘the hands and feet of Christ’ … to reach out and do everything we can to give these people back their place in the sun?” 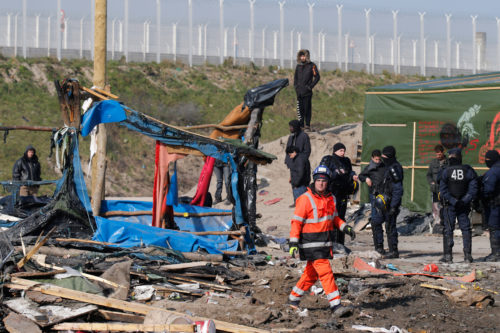 Workers demolish makeshift shelters as refugees and French riot police look on during the partial dismantlement of the camp called the “Jungle” in Calais, France, March 14. Photo: REUTERS/Pascal Rossignol

To find out exactly what is happening and what is needed the most, Closel stays in regular contact with Christian Hogard, a lifelong resident in the Calais area who has made it his vocation to support refugees since 1999 when a Red Cross reception center opened at the Port of Calais mainly to house and process those escaping conflict in the Balkan countries of Eastern Europe.

“By working with Christian, who works directly with the central clearing house on the ground up there, we had a pretty good chance of targeting where the need is greatest. [He] is a man of boundless energy, organization and imperturbable courage,” said Closel. 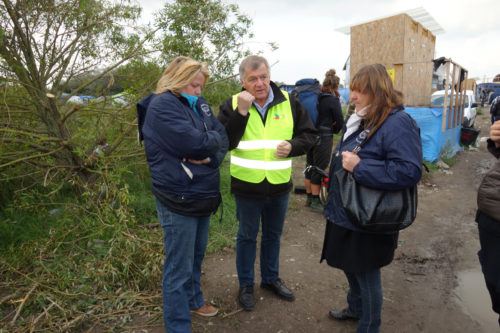 Christian Hogard, the main point of contact in Calais for the American Cathedral in Paris’s response there, speaks with two volunteers for the refugee support group SALAM one December morning in the Calais camp known as the “Jungle.” Photo: Regan du Closel

As the shacks and tents in the Jungle are razed, some 1,500 people are being moved into a neighboring government camp of shipping containers, Closel explained. Another 1,500 are being moved by bus 25 miles down the Channel coast to a new camp on the outskirts of Dunkirk run exclusively by humanitarian organizations. People there are housed in spartan wooden huts.

“To hustle them along, police and smugglers have torched many makeshift shelters and vehicles,” she said.

Among the vehicles that have been destroyed is a first-aid van purchased with donations from parishioners and friends of the American Cathedral in Paris and blessed by Convocation Bishop Pierre Whalon and Cathedral Dean Lucinda Laird, who visited the Jungle before Christmas.

In the new government camp, the refugees are housed by nationality in shipping containers with bunk beds, electricity and heating, but there are no showers and only cold running water, Closel said.

The Dunkirk camp has no cooking facilities and the French government will no longer provide any meals for the refugees, so all food is to be funded by donations and provided by nongovernmental organizations. Likewise, the cost of medical supplies and the local housing and transport for the volunteer medical staff is being covered only by donations.

Closel and Girty, who is head of mission and outreach at the American Cathedral, have organized an emergency drive for material donations to help refugees in the Dunkirk camp, culminating on Palm Sunday.

“Since September we’ve been overwhelmed by not just the immense generosity and involvement of our parishioners, but also by the increased interest coming from Episcopal congregations in the United States wanting to make a difference,” said Girty. “Some have contributed directly to the associations with which we’re collaborating or through us as a conduit. The American parishes should feel free to reach out to us here at the American Cathedral. We are hopeful that the current drive during this week leading up to Palm Sunday will have as successful a response.”

The American Cathedral in Paris, a parish in the Convocation of Episcopal Churches in Europe, runs and supports several ministries that are responding to the needs of refugees and asylum seekers in France.

The Love in a Box ministry, headed by lay Episcopalian Judy Nicault, has for more than a decade distributed gifts at Christmas time for orphans and disadvantaged children throughout Europe. In 2015, Love in a Box delivered more than 3,000 gifts and focused part of its effort on reaching out to the children and unaccompanied minors living in the Jungle. 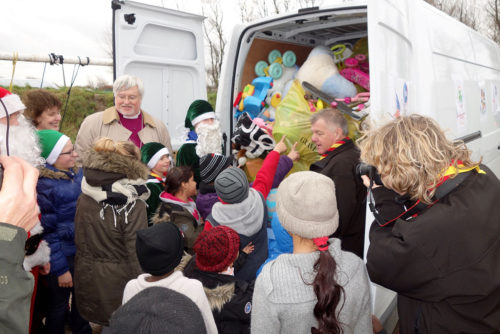 American Cathedral in Paris Dean Lucinda Laird and Convocation of Episcopal Churches in Europe Bishop Pierre Whalon help to distribute gifts from the Love in a Box ministry at the Calais camp in December. Photo: Regan du Closel

Whalon and Iraqi businessman Elish Yako set up the association in 2007. Although it has largely focused on resettling Iraqi Christian refugees, in the past three years it has helped many Syrian minorities escaping persecution.

Laird expressed her gratitude to Closel and Girty for their work, and for leading the emergency drive to respond to the crisis in Calais. “It is almost Holy Week – and we are walking the way of the cross, the way of suffering, with one who also had no place to lay his head,” she said. “What could be more clear? To follow Christ isn’t about church services; it’s about finding Christ among the least and the lost, walking with those who suffer and those in need, and welcoming the stranger. The current situation in Calais, in France, and in the rest of Europe calls all of us to reach out, and not only to help directly, but to work for justice and peace.”

Like the American Cathedral, other Episcopal parishes and missions throughout Europe don’t see their response to the world’s worst refugee crisis since World War II as short term.

Episcopalians in Brussels, Munich, Rome, Wiesbaden and other places are serving the needs of refugees both through long-standing programs and new ministries that continue to evolve as the crisis evolves.

Last October, the convocation passed a resolution during its annual convention calling on Episcopalians in Europe to engage in a period of renewed commitment to its ministry of welcome to refugees, education on the issues, working ecumenically and “advocating for just and compassionate policies at national and international levels that strengthen reception and integration of new migrant populations in our midst.”

Whalon said it has been “so heartening to see how, across the board, our 21 churches in Europe have responded to the current refugee crisis. Even our smallest have been raising funds by hosting dinners, visiting camps with goods and food, and showing the love of Christ to all they meet.” 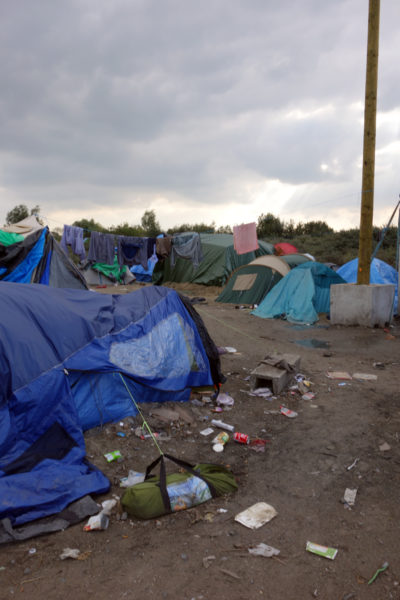 Conditions in the Calais camp are often described as miserable, leading to it being branded the “Jungle.” Photo: Regan du Closel

With the dismantling of the Calais camp and border closures implemented between Greece and Macedonia, one of the main transit points for refugees entering Europe, the challenges are far from over. Meanwhile, the fears of what the influx of refugees will mean for Europe’s security only seems to be intensifying.

Closel acknowledged the deeply divided opinions throughout Europe. “On the one hand, there is the urge among individuals to welcome and to share, and examples of this almost everywhere,” she said. “On the other, there is rejection based on fear, a large and amorphous fear of losing cultural identity, a fear of differences too great to be bridged easily, … a fear of losing property value, of being robbed materially and morally, a fear of invasion, a fear of Islamization, a fear of state support not big enough to go around. And these fears are not being addressed rationally or constructively, so they can only fester and grow. Many eyes in France are on Donald Trump, a benchmark of sorts of where that fear can take us.”

But the more Closel gets to know the refugees, both in Paris and in the Calais camp, she sees “survivors in a great sense, and their trials have given them an endurance that we who live such relatively soft lives can only imagine.”

Closel identifies as someone who has always been at the crossroads between cultures, considered European in the United States and not quite French in France.

Born in Geneva, Switzerland, to American parents, she lived in Paris from age 2 to age 8, and was baptized at the American Cathedral. For the next 20 years she lived in the U.S. and returned to France, where she has lived and worked for the past 30 years.

“In many aspects of my life, I have felt as if I am on the outside looking in,” she said, which has helped her to identify with the refugees “who have been thrown onto the roads despite themselves, and who have come all the way to the north of France looking for the chance to work again, to use their skills and will and make a life for themselves, and who find the doors barred and rejection everywhere they turn.” 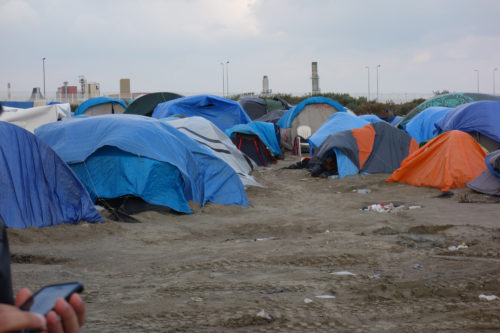 Conditions in the Calais camp are often described as miserable, leading to it bein g branded “The Jungle.” Photo: Regan du Closel

It is this experience that has inspired Closel to take on the mission of developing aid and understanding for the refugees, “which speaks to my deep values of cross-cultural understanding and enrichment, giving each person his or her place in the sun, and creating a more equitable playing field.”

– Matthew Davies is an editor/reporter of the Episcopal News Service.