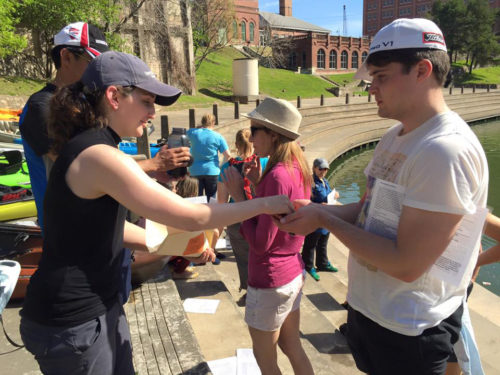 [Episcopal News Service] Being a “fit” Christian has taken on a whole new meaning for some congregations this Lent.

At St. George’s Church in Laguna Hills, California,  “Bod4God”, and “Holy Hikes” have transformed Lent from “a sit and wait time” to a more purposeful season for parishioner Sherry Wright.

Pairing the physical activity of the weight-loss programs with their spiritual components has shifted the season into “a growing time” and inspired the realization “that I want to be as healthy and best I can be, to better do God’s service,” Wright said.

Hearing the week’s lessons during Holy Hikes “has taken me into a deeper place with Scripture,” she added. “I listen to it differently on Sundays now.” It has also deepened community “by being with others on a similar path.”

“Episcopalians love to eat together,” agreed parishioner Jeffery Rockey. “But for so many of us, what we eat is not healthy enough and we’re not active enough and we never talk about those things in church.

“We never talk about the fact that we’re not doing the best things for our bodies – and if we are created by God and for God, what are we doing to ourselves if we’re eating junk?”

“Christians are one of the most overweight groups in the country,” said Reynolds. Since he developed Bod4God, a 12-week series of classes offering weight loss, physical, nutritional and spiritual advice, thousands have lost weight and gained a more holistic understanding of dedicating their physical selves to God.

Now he is disease-free and “my goal is to make us the fittest not the fattest … using the Bible,” Reynolds told Episcopal News Service. “I think the Bible’s the greatest health book in the world” especially if participants focus on the kinds of food that Jesus ate, he said.  “I just want people to understand that God cares about our bodies, that this is part of their Christian walk, to live for him and to serve him” in healthy ways.

Similarly, Anna Fitch Courie’s own experiences inspired her creation of Christ Walk as a 40-day effort, inviting congregations to better nutrition and healthy eating while regarding physical activity, community service, and meditation as journeys of faith.

“I lost my hearing at 12; I was diagnosed with cancer nearly two years ago,” said Courie, 40, who works as a public health nurse in Alexandria, Virginia.

“People hurt in this world. People hurt in the church and they don’t really know how to put it all together,” said Courie. “They also don’t always recognize that God wants to be all of that, not just part of that.”

Cochlear implants restored her hearing and the experience taught her to “trust in Christ. It’s important to understand a lot of things illness and disease cannot take from you. You don’t have to be defined by disease and illness, and by what you can and cannot do,” said Courie, who is leading an upcoming May 6-8 Christ Walk retreat at Shrine Mont, The Cathedral Shrine of the Transfiguration in the Diocese of Virginia.

The daughter of an Episcopal priest, Courie said being a “fit Christian” means having a holistic approach to mental, physical and spiritual life, and “the perception of living every part of your day with Christ foremost in your mind, with decisions we make about our bodies, with our families, with our jobs, that it’s a way of life.”

Like Bod4God, congregations are encouraged to create teams, meet weekly for nutritional and health advice, and to set goals for regular exercise. For example, they can opt to take “The Exodus Challenge” and walk 375 miles, or the approximate distance the Israelites traveled to the Promised Land, at 9.4 miles a day or 18,750 steps a day.

“I thought, wouldn’t it be fun to go from Jesus’ birthplace in Bethlehem to Egypt, where he was taken into exile, to Nazareth where he grew up, to Galilee, where most of his ministry occurred, to Jerusalem, where he died?

But it was so popular that “a week and a half into it we’d already met our goal,” Hollingshead said. “We’ve more than doubled it now. Oh me of little faith, I should probably have set a goal of 10,000 miles.”

Participants, like Betty and Bob Lawrence, say they translate their weekly exercises and each 15 minutes spent doing community service, into a one-mile credit.

“We volunteer for Meals on Wheels, and tutor in a reading program at a local elementary school,” said Betty Lawrence, 79, “and we’re still going strong.”

The weekly team meetings have made it a different Lent thus far for her “because of the sharing element and the sense of community. I like the idea that health isn’t just the absence of illness, that it’s an overall being, like body and soul.”

Weekly, participants report their miles earned; Hollingshead tallies totals. The program is “grace-filled and not guilt-filled” and “no one is excluded,” she said. “We have several people on walkers, or who are somehow limited in mobility, who participate.”

Weekly meeting topics – including everything from individual goals, successes and challenges to “FitBits gone wrong” – inspired Hollingshead to launch a holistic sermon series about the physical and spiritual life.

“I have never preached a sermon about health and spirituality, and I never heard one before,” she said.

The series concludes on Palm Sunday and “on Easter we’re having French toast and all kinds of goodies, because it’s a celebration. But, we’re also talking about how, unfortunately in our American culture, we’re eating that stuff every day and that’s what’s causing so many of us so many problems,” she said.

“Eating so many rich foods … in biblical times they didn’t eat that. The prodigal son comes home and they kill the fatted calf and it’s a celebration. But, hey, we’re eating the fatted calf here every day.”

In Houston: Canoes and community service 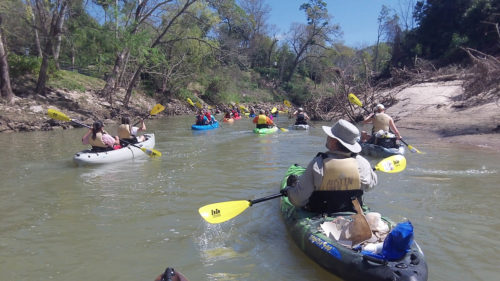 The March 5 Canoecharist began about 8:30 a.m. with the opening acclamation and reading of lessons before some 20 canoes and kayaks launched into Houston’s Buffalo Bayou.

Singing as they paddled, the 20- and 30-somethings retrieved plastic bottles and bags, beer cans, and even a lawn chair from the water in what felt, to Jeremy Bradley, 29, minister for youth and young adults at Christ Church Cathedral like the classic “slowing down and reflecting” called for during Lent.

“It was a journey that allowed us to become aware of the word that God was speaking to us in new ways.”

For Bradley, it was a time to connect with nature within the city “a chance to be aware of how the paddle goes through the water, how that pushes you forward, (and) to be aware of your surroundings,” as well as to connect on a deeper level in community.

The trip began about 8:30 a.m. and concluded about 3 p.m. and an important component was the “giving back (that) is important to people of my generation,” Bradley said. “To be able to do something that’s bigger than themselves, and to give back to a community that supports them in many ways.”

He added: “It’s part of why I do youth ministry now. I got plugged into the church in high school, and I’ve never looked back, because of people who invested in me and loved me and cared for me and showed me that helping out others and keeping the earth clean and trash-free are important goals.”

Joining with Habitat: Instead of giving up, giving back for Lent

Instead of giving something up for Lent this year, Episcopalians in Louisiana and

Alabama are giving back – spending Saturdays with other congregations building new homes as part of Habitat for Humanity’s faith initiative.

“Lent has always been a time to focus on the meaning of death and resurrection. It is about finding ways to deepen our walk with Christ so that we become resurrected people and offer hope to the world,” according to the Ven. Lou Thibodaux, of St. Thomas Episcopal Church in Birmingham.

She planned to “do a lot of the sanding and finishing and putting on blue board and siding” on March 5 in a nearby town decimated by the steel mill closings. “This is a chance to revitalize the community.” 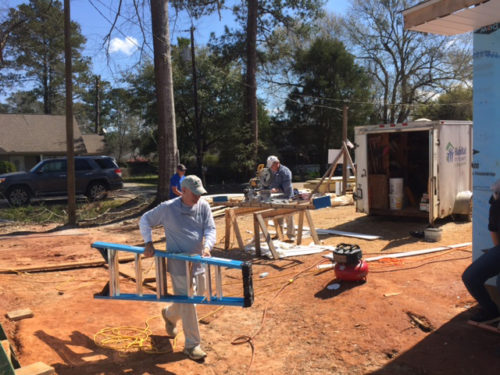 Similarly, Chad Lockfield, a member of Christ Church in Covington, Louisiana, said the construction got underway around Ash Wednesday and “these past two Saturdays we’ve been putting on HardiePlank siding.”

Although Habitat is a year-round program, Cassie Brooks, vice president of development for the Habitat for Humanity Greater Birmingham in Alabama, said the Lenten build is a faith initiative that joins various churches with potential homeowners.

The groups make an initial financial contribution, commit to prayer support and provide volunteer labor to build what are typically three-bedroom, two-bath homes. The average cost of new construction is $81,000 so a family’s monthly interest-free mortgage payments are about $500.

A dedication service is held after completion. “It allows people to see the tangible results of their time and their money,” Brooks said.  “It revitalizes neighborhoods and creates healthy living environments.”