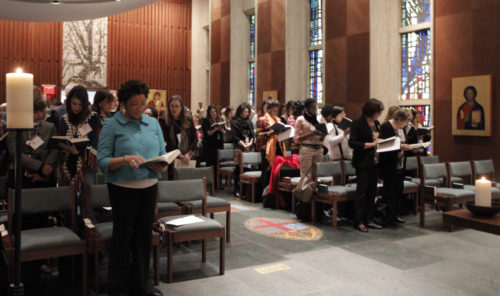 Episcopal and Anglican women gathered March 14 at the Episcopal Church Center’s Chapel of Christ the Lord for a Eucharist opening the 60th annual United Nations Conference on the Status of Women underway through March 24. Photo: Lynette Wilson/Episcopal News Service

[Episcopal News Service] Examples of women’s strength, courage and “sisterhood of the suffering” can be found throughout the Bible, including in the two lectionary readings coinciding with the opening of the 60th annual United Nations Commission on the Status of Women.

The March 14 readings, 2 Kings 4:18-37, where Elisha raises the Shunnamite’s son, the Gospel, John 11:18-44, in which Jesus raises Lazarus to life, are each an invitation “to claim the witness and power” of women in biblical texts, said the Rev. Margaret Rose, the Episcopal Church’s deputy for ecumenical and interfaith collaboration, in a sermon given during the opening midday Eucharist at the Chapel of Christ the Lord in the Episcopal Church Center a block from the United Nations headquarters.

“Each [story] is about healing and resurrection…,” said Rose. “[But] it is the women who brought these healers where they needed to be. The women who were the messengers, the women who refused to give up when others were paralyzed by mourning, the women who proclaimed the possibility of new life and redemption, and women who named Jesus as Messiah.”

In the spirit of the healing of the world, women from across the Episcopal Church and throughout the Anglican Communion representing more than 20 countries are gathered in New York for the 60th session of the UNCSW March 14-­­­­­­­24. The women had gathered in the chapel at the church center that morning to watch the official U.N. webcast opening the conference. 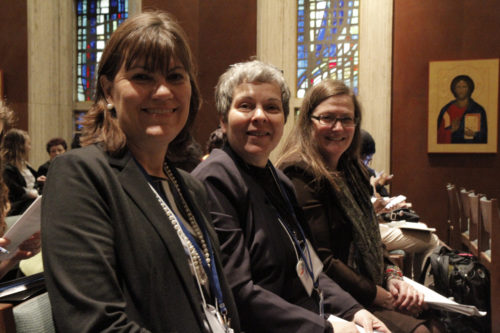 In addition to the official Episcopal and Anglican delegations, each with up to 20 delegates, many more women and men are in New York representing Anglican Women’s Empowerment, Episcopal Church Women, the International Anglican Women’s Network, the Anglican Church of Canada and the Episcopal Diocese of New York attending offsite and parallel events and panels.

“What an honor to represent so many women across the world …,” said Presiding Bishop Michael Curry in a letter read on his behalf by the Rev. David Copley, the Episcopal Church’s officer for mission personnel, before the March 14 morning webcast.

“Throughout the two weeks, I pray you listen, learn, and work together focusing on the four ongoing challenges to the achievement of women’s empowerment identified in the Episcopal Church’s written statement to the UNCSW…,” he said.

Although the Episcopal Church has had a presence at the UNCSW since 2000, only in recent years, since 2014, when it gained consultative status with the U.N. Economic and Social Council has it sent a delegation to official UNCSW proceedings. Moreover, last fall, the church submitted a statement to the UNCSW identifying four ongoing challenges and asking member states “to swiftly adopt and implement legislation on the following urgent needs”: to enable women to access power and decision-making positions; to foster women’s and girls’ economic empowerment and independence; to eradicate violence against women and girls; and to provide preferential treatment to marginalized women and girls.

The four ongoing challenges named as advocacy priorities were those mentioned by Curry in his letter. The presiding bishop determined the Episcopal Church’s official advocacy priorities based on General Convention and Executive Council resolutions and the church’s position on issues such as human trafficking and gender-based violence in relation to conversations currently underway at the U.N., explained Lynnaia Main, global relations officer for the Episcopal Church and its liaison to the United Nations.

The theme for the 60th annual UNCSW is “Women’s empowerment and its link to sustainable development,” and the review theme carried over from the 57th session is “The elimination and prevention of all forms of violence against women and girls,” which includes a framework for addressing, preventing and responding to violence against women and girls.

Specifically, the fifth SDG seeks to achieve gender equality and empower all women and girls, with targets including ending discrimination; eliminating violence, including trafficking and sexual exploitation; eliminating harmful practices such as child and forced marriage; and, recognizing the value of unpaid care and domestic work.

This year’s UNCSW also comes on the heels of the 21st annual Conference of the Parties, where in December 2015 in Paris  negotiators reached a historic agreement aimed at reducing carbon emissions and holding global warming to below 2 degrees Celsius. And an agreement to generate financing for the sustainable development agenda adopted last summer.

Nineteen Episcopal delegates – including one provincial representative to the Anglican Communion delegation – will attend official U.N. proceedings and represent the church’s official positions.

Anglican and Episcopal delegates will also participate in Ecumenical Women’s advocacy, including training, ecumenical worship, visiting permanent missions at the United Nations, and continuing advocacy upon return to their local communities.

Ecumenical Women is an international coalition of church denominations and ecumenical organizations which have status with the U.N. Economic & Social Council; these bodies share and are committed to a common mission and vision.

One of the things the Episcopal Church delegation will be doing is advocating, general networking and sharing Ecumenical Women’s priorities in an attempt to influence the outcome document, said Main. It’s important that churches and non-government and non-profit organizations, or civil society in U.N. parlance, play a role in implementing the sustainability goals and financing women’s organizations, said Main.

“It’s really important that we ‘leave no one behind,’ that’s one of the key phrases” of this year’s UNCSW, she said.

The UNCSW serves to promote women’s rights in political, economic, civil, social and educational fields, and to make recommendations on urgent problems regarding women’s rights. The conference has convened annually or biannually since 1946; it reached a turning point in Beijing in 1995 when it adopted a global policy framework for gender equality and the empowerment of women that identified 12 areas of critical concern. 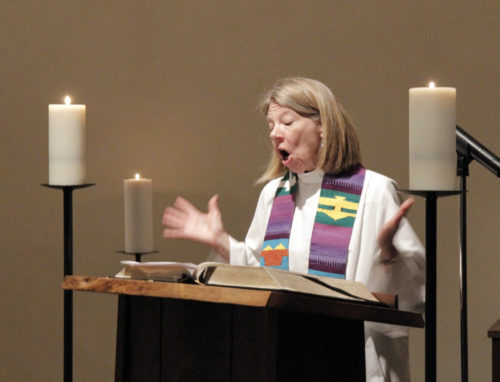 The Rev. Margaret Rose, the Episcopal Church’s deputy for ecumenical and interfaith collaboration, preached during the opening Eucharist at the Chapel of Christ the Lord located at the Episcopal Church Center a block from the United Nations headquarters. Photo: Lynette Wilson/Episcopal News Service

“As the women gathered for the 51st UNCSW that year, we did not want those conflicts to blind us to the needs of our sisters and brothers around the world,” said Rose in her sermons, those needs being food, education, freedom from violence, war and rape.

At that time, an Anglican Communion statement sent to the United Nations and a similar statement sent the Anglican primates signed by more than 80 women proclaimed: “[This] sisterhood of suffering is at the heart of our theology and our commitment to transforming the whole world through peace and justice. Rebuilding and reconciling the world that is central to our faith.”

This time as the Episcopal and Anglican woman come together it is in the wake of the Anglican primates calling for temporary “consequences” against the Episcopal Church in the aftermath of the 78th General Convention’s decision to change canonical language that defines marriage as being between a man and a woman (Resolution A036) and authorize two new marriage rites with language allowing them to be used by same-sex or opposite-sex couples (Resolution A054).