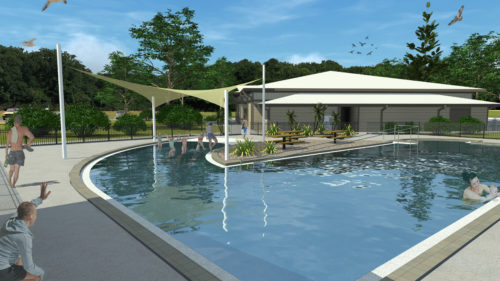 [Diocese of Southwest Florida] The Diocese of Southwest Florida is expanding its DaySpring Episcopal Center, with new programs, a new 10-year master plan and a $3.6 million program center and pool complex. The investment in the 97-acre camp is the largest ever for the retreat and conference center located along the Manatee River south of Tampa Bay.

DaySpring has taken an increasingly important role in the Episcopal Church in Florida since it opened in 1983. In addition to the usual offerings of a camp and conference center, it also houses the office of the Bishop. When the Diocese of South Florida divided in 1969, Southwest Florida was without its own conference facility. In 1979, Southwest Florida acquired a 76-acre tract along the Manatee River, now called DaySpring. The parcel, packed with live oaks and Spanish moss, was within one hour of much of the diocese, and easily accessible off of what was to be a newly expanded Interstate 75.

Immediately, Episcopal groups came, and in successive years, new cottages and residences were acquired. Amenities like nature trails and ropes courses were added and a wood-framed carpenter gothic chapel was relocated there to serve as the centerpiece of the campus. When Smith arrived in 2007, DaySpring was struggling financially, in spite of its popularity. Smith was immediately committed to the center, promoting its value and potential to diocesan leadership.

The idea is to see DaySpring as the “spiritual nerve center” of diocesan life, so that the audience and impact of formation and congregational development programming there grows, even beyond the diocesan boundaries. 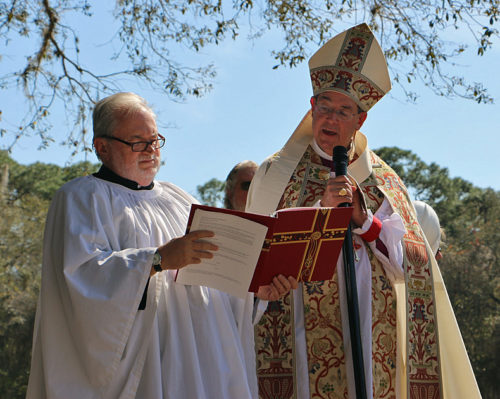 The Rev. Michael Durning, canon to the ordinary, and Bishop Dabney Smith participate in the groundbreaking for a new program center at DaySpring Episcopal Center. Photo: Diocese of Southwest Florida

“Bishop Smith’s clear vision for the diocese as we approach our 50th anniversary is the guide for what we are doing,” said Anne M. Vickers, chief financial officer and Canon for administration and finance at the diocese. “Our diocesan staff, which includes all of the staff at DaySpring, are committed to implementing this vision.”

Vickers credits Executive Director Carla Odell and the DaySpring staff with their skill in managing a sustainable conference center budget, carefully managing expenses to the varying revenue throughout the season.

“This project is the tangible sign of the vision and operations coming together,” said Vickers.

Visits to DaySpring grew in 2012, when the Diocese of Southwest Florida moved its offices to DaySpring, making it easier for diocesan staff to hold smaller and more frequent meetings, giving more visibility to the center amongst Episcopalians. Immediately, the operations of the diocese became connected to the camp, which not only offers programs and training for the 77 congregations of the diocese, but serves tens of thousands of locals, as well as visitors from outside of Florida. The camp’s budget today has grown to around $1.5 million; DaySpring now benefits from a maintenance endowment established under Smith’s leadership that has grown from to $726,000 in six years.

The brightening financial picture included becoming an attractive retreat center for guests, who come for the peace and quiet. DaySpring serves groups that range from University of South Florida to football camps to retiree craft and quilting gatherings. Last year the 304-bed facility served 62,799 meals. Just this winter, DaySpring has hosted the national meeting of the Episcopal Camps and Conference Centers and the national board of Episcopal Church Women.

On March 1 the diocese began a new era at DaySpring as they broke ground on a new facility, with dignitaries and almost 100 priests from across Southwest Florida on retreat at DaySpring’s annual College of Presbyters conference. Early that day, the priests had heard Brother Randy Greve of New York’s Holy Cross Monastery speak on the modern interest in monastic life.

The new 12,500-square-foot Program Center, set to open by December, will serve as DaySpring’s primary area for youth and adult programs, art and music recreation activities, retreats, teaching and worship. Two key amenities include a 5,000-square-foot multi-use recreation/meeting hall and a 2,000-square-foot pool alongside an outdoor pavilion. The new program center replaces an aging portable building and represents the first of a multiphase, 10-year DaySpring master development plan initiated in 2014. The $20 million master plan calls for two additional phases, which will include construction of a new and larger worship center and more hotel-like residential facilities.

A majority of the riverfront property, much of it wetlands, will remain undeveloped, even as residential and commercial development in the area increases. In 2015, the diocese added two properties to DaySpring, including a 2.5 acre wooded area to keep the perimeter of DaySpring untouched.

In his address at the groundbreaking, Smith referred to Bishop Paul Haynes, the second bishop of the Diocese, under whose leadership DaySpring was established. Citing the “beauty of this place,” Smith reminded that nature is but a part of the experience. “What we do here is to retain and preserve the beauty, and make programmatic space for the formation of God’s people,” said Smith. “Both, you see, are required.”