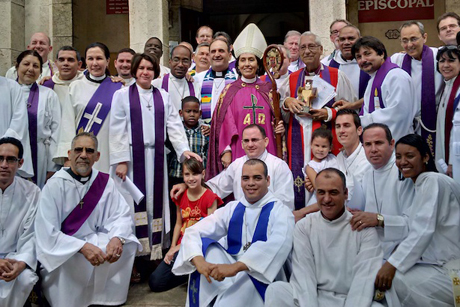 Members of the Episcopal Church of Cuba synod and guests gather outside the Holy Trinity Episcopal Cathedral in Havana.
Photo: Andrea Mann/Anglican Journal

[Anglican Journal] A year after the Episcopal Church of Cuba voted unanimously to return to The [American] Episcopal Church (TEC) following the normalization of relations between Cuba and the United States, it is still unclear how this will affect the relationship between the Cuban and Canadian Anglican churches, said Archbishop Fred Hiltz, primate of the Anglican Church of Canada.

“[The Episcopal Church of Cuba] has this long history with The Episcopal Church, and [there is a] deep desire to return, but there’s a bit of hesitation, and I think some anxiety about . . . what does this mean for [their] historic relationship with the Anglican Church of Canada?” Hiltz said in an interview following the Cuban church’s annual synod. Hiltz attended the synod as chair of the Metropolitan Council of Cuba (MCC), the body that has overseen the Cuban church since 1967, when it was cut off from TEC following the political standoff between Cuba and the U.S. that began in 1962. The Cuban church was established as a missionary diocese of The Episcopal Church in 1901.

Over the past 48 years, the Canadian church has played an important role in bridging the gap between Cuban and American Episcopalians. It has also provided the Cuban church with financial support by topping up clergy stipends, contributing to the bishop’s discretionary fund and paying for two Anglican faculty positions at the ecumenical seminary in Matanzas.

But Hiltz says that with relations normalizing, change is “a given.” And although it is not yet clear what change will look like, he said TEC might take up some of the responsibility for supporting Cuba financially.

“If [the Episcopal Church of Cuba] becomes part of TEC, then a lot of the things for which they’ve been able to turn to Canada for in terms of financial support and so on, really would become the responsibility of TEC,” he noted.

However, Andrea Mann, the Canadian church’s director for global relations, stressed that the ball is currently in TEC’s court. The Cuban church has been unequivocal in its desire to re-join the American church, but The Episcopal Church has stated that it will not be able to respond to the request until its General Convention in 2018.

“A commission was going to be formed to study the Episcopal Church in Cuba’s resolution . . . to become part of TEC again,” she explained. “The commission has not officially reported back [to Cuba] on its work to date since General Convention [2015], so there was no report at the recent synod in Cuba from the commission studying their request.”

Furthermore, while TEC Presiding Bishop Michel Curry is a member of the MCC, Hiltz said that neither he nor anyone else from TEC was present at the recent synod – although he will be present at the next MCC meeting in June.

Mann said she thinks the June meeting will clarify some of the uncertainty.

“I think the June meeting is going to be a place where the key people are going to meet. Michael Curry is going to visit Cuba for the first time, [and] he’s going to get a sense of what the process is moving forward,” she said.

In the meantime, the Canadian and Cuban churches continue to work together, most notably in co-sponsoring an international justice camp, along with the diocese of Niagara (Cuba’s Canadian partner diocese) and the Canadian church’s development agency, The Primate’s World Relief and Development Fund.

The camp, which will take place from 30 April to 7 May, will bring 25 Anglicans from across the Canadian church to the Cuban city of Matanzas, where they will join 25 Cuban Anglicans in discussing how to engage issues of food security, citizenship, and social engagement and economic justice in their respective contexts.

“I hope that this camp gives Canadian and Cuban Anglicans an opportunity to meet together and talk formally and informally so that both groups return to their local contexts with renewed enthusiasm, and some really interesting ideas to try,” Mann said. “I hope that everyone who participates experiences a meaningful and informative intercultural experience, so that the Canadians who participate come away . . . with a different sense of who Cubans are, the social and economic and political realities in Cuba.”