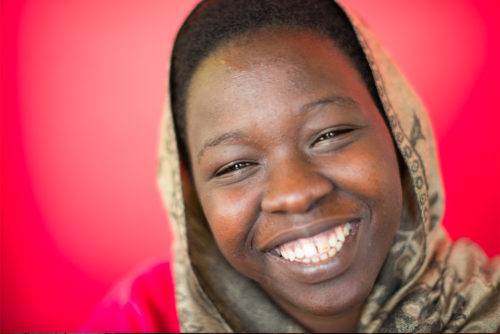 “Facing America: Portraits of Refugees Resettling in the United States,” a photography exhibit on display at St. Ann and the Holy Trinity Episcopal Church in Brooklyn, tries to tackle the numbers and put faces on them. Photo: Hidei Takagi

[Episcopal News Service] When Omar Al-Bayte fled Iraq in 2013, it wasn’t the first time he sought safety outside his home country.

Following the U.S. led invasion in 2003 that ended Saddam Hussein’s authoritarian regime, Al-Bayte, 32, worked construction for the U.S. government, a job for which he later received threats. In 2005, he left first for Syria, and then India, where he studied information technology. In 2008, he returned to Iraq and went to work for the Iraqi government until once again he received threats, this time because of his distinctly Sunni surname.

By this time married, together he and his wife, Zahraa Abualteman, 21, fled their home in Baghdad for Amman, Jordan, where for two-and-a-half years, they waited for resettlement. The wait and uncertainty were at times excruciating, they explained, while seated on a sofa in their Denver, Colorado, apartment. The couple’s year-old son, Yousif, napped in another room.

Lutheran Family Services Rocky Mountains is one of 30 refugee resettlement affiliates partnered with Episcopal Migration Ministries, in 26 dioceses nationwide. Last month, Presiding Bishop Michael Curry visited LFS’s office in Denver to learn about the resettlement process and to hear a firsthand account from a Syrian family that arrived in the United States in December.

Episcopal Migration Ministries, the Episcopal Church’s refugee resettlement ministry, is one of nine agencies working in partnership with the U.S. Department of State to welcome and resettle refugees to the United States.

Curry’s visit to the Denver affiliate marked his first to an EMM affiliate since becoming presiding bishop last November. While there, Curry described the efforts of EMM and its affiliates as “God’s work”; his visit called attention to the plight of refugees across the Episcopal Church, where throughout Lent individual churches have sought to do the same in their congregations and communities.

Without meeting them in person and listening to their stories, it can be hard to grasp what it’s like to be a refugee or even the idea of millions of people forcibly displaced. 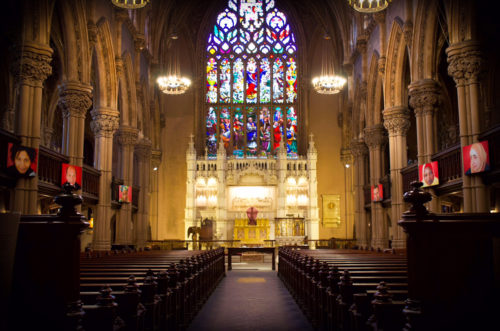 “Facing America: Portraits of Refugees Resettling in the United States,” a photography exhibit on display at St. Ann and the Holy Trinity Episcopal Church in Brooklyn, tries to tackle the numbers and put faces on them.

Commissioned by the Forum at St. Ann’s, the 19 photographs feature a snapshot of refugees from all over the world who have made their way to the United States. These are refugees that have escaped political instability, persecution and violence.

“We see these large numbers of people crossing borders and we don’t get the whole picture – and we don’t think enough about who these people are and what their lives are about,” said the Rev. John Denaro, rector of St. Ann’s. Denaro put the exhibit together with parishioner Harry Weil. “[In the exhibit] we’re seeing these people face to face, not knowing their whole story, but beginning to appreciate that there isn’t just this mass of humanity but individual lives that are at stake. … It’s calling us to wonder about the fate of these people.”

The refugees featured come from Iraq, Afghanistan, Syria, Sudan, the Democratic Republic of the Congo and Eritrea, and have been resettled in New Haven, Connecticut, by Integrated Refugee and Immigrant Services, also an EMM affiliate.

Denaro worked for EMM in various capacities for 10 years before coming to St. Ann’s, which helped him make the human connections for the exhibit. The photographer, Hidei Takagi, immigrated from Japan and now lives in Brooklyn. She has exhibited work all over the world, including London, Madrid, Tel Aviv and Paris.

Although the forum hopes the exhibit will speak to people of all walks of life and various faith traditions, it was significant for it to make the connection with the refugee experience and the Christian season of Lent, said Denaro. “This season brings up the hardest part of Jesus’ earthly journey … he had to face suspicion and violence, and ultimately his fate, alone. The exhibit – in part, for those of us who bring that sensibility to it – resonates with the themes of Lent, that we are called to wonder how we hold onto our identity in the great trials of our lives and live into the unpredictability of our own humanity.”

The photographs are hung in the nave of the church, so that not only visitors, but also parishioners in worship are confronted with the images. “They are literally hovering over us, and we are keeping company with them,” said Denaro. “It’s something that intentionally engages us as Christians and citizens, and shows that we are ready to have this larger conversation about what it means to live in an interconnected world.” 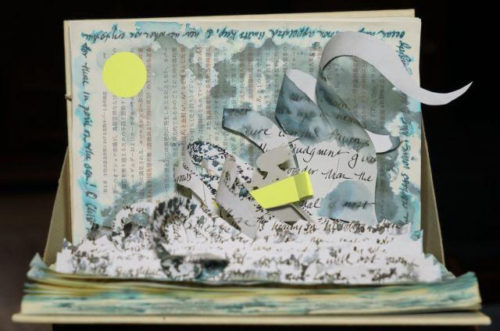 Forty dioramas – all made by parishioners of various artistic skill levels – have been placed on windowsills throughout the worship space at St. Mark’s Episcopal Church on Capitol Hill. Photo: David S. Deutsch

At St. Mark’s Episcopal Church in the Capitol Hill section of Washington, D.C., the Rev. Michele Morgan, priest-in-charge, decided to move Lent beyond “giving up coffee and donuts; things we should give up anyway,” she said.

Focused on refugees, 40 dioramas – all made by parishioners of various artistic skill levels – have been placed on windowsills throughout the worship space, to be visual reminders of millions of refugees worldwide. Additionally, in keeping with a longstanding tradition at St. Mark’s, Morgan and the parish’s outreach board are providing a 20-page booklet that includes facts about refugees, Bible verses, meditations and prayers aimed at aiding parishioners to reflect on refugees and their plight. The daily Lenten practice also includes “giving prompts and a mite box.” Named for the biblical story of the widow’s mite, the boxes are to collect offerings for people around the world in need of support. 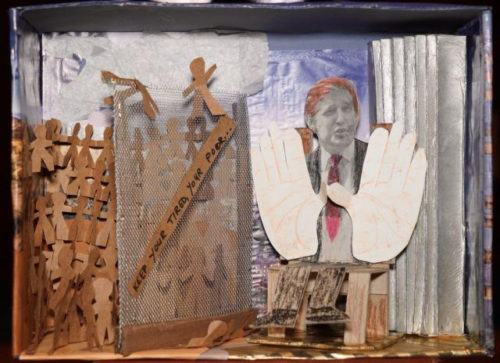 The dioramas serve as visual reminders of the millions of refugees worldwide. Photo: David S. Deutsch

For example, Week One focused on refugees’ need for security in their new home country. The first entry, for Ash Wednesday, provided background information on the crisis in Syria. It read:

“The Syrian conflict began in March 2011 with a series of peaceful protests and has since resulted in the death of more than 170,000 people and uprooted an additional 9 million. The latest figures from the U.N. High Commissioner for Refugees, or UNHCR, show that approximately 2.9 million refugees currently reside in the neighboring countries of Lebanon, Turkey, Jordan, Iraq and Egypt. These people are currently either living in temporary housing or are on the road seeking shelter. Name five things about your home that make you feel safe. Put 25 cents in the mite box for each one.” 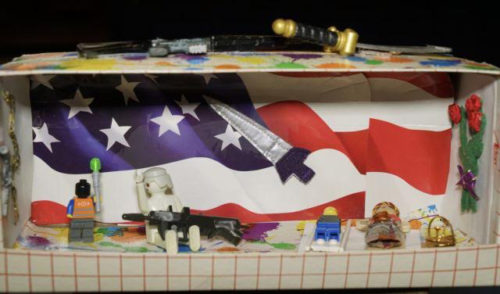 For instance, Lent 3, Feb. 29-March 5, focused on the importance of belonging, with prompts reminding parishioners about the importance of not only immediate family, but extended family and friends. Lent 6, March 21-26, shifts the focus to compassion and advocacy.

UNHCR acknowledges that life is difficult for Iraqi refugees living in Jordan; in addition to it being illegal for them to work, a shortage of humanitarian aid and services make the asylum process all the more difficult.

Al-Bayte and Abualteman said, faced with such difficulties, they contemplated making the dangerous journey to Europe. But now the couple is settling into life in Denver, where Al-Bayte looks forward to getting a job and becoming independent.

The majority of Abualteman’s family and friends remain in Iraq, although her sister and brother-in-law live in Denver. Many of Al-Bayte’s family also fled Iraq, some have been resettled in Connecticut. Ultimately, as the Syrian family told the presiding bishop when he met with them, and as Al-Bayte and Abualteman also said, refugees are looking for the kind of safety that comes with a country that provides security for its citizens, education opportunity and human rights protections, and the kind of peace that allows them to sleep at night.

When asked what they’d like Episcopalians and others in the United States to understand about refugees and their plight, Abualteman said: “We are innocent people leaving our countries by force, leaving our memories, traditions and families because of the security situation.”

– Lynette Wilson is a reporter/editor for Episcopal News Service. Ashley Wright is a Minneapolis-based freelance writer.