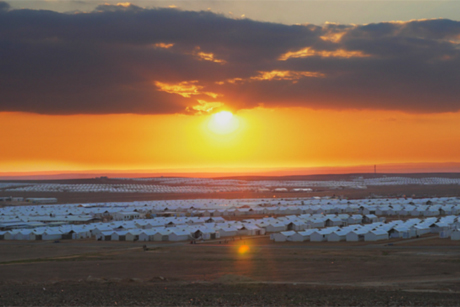 The sun sets over the Azraq refugee camp in Jordan. Photo: World Vision

[Church Times] There is a saying about Azraq refugee camp: the only risk is that you will die from boredom.

Its orderliness is evident from satellite images: tidy rows of white blocks gradually filling a grid of squares, like numbers in a Sudoku puzzle. The grid has been carved into a lunar landscape, an isolated corner in the north-west of the third-driest country on earth.

When Azraq was opened in April 2014, it was expected to become one of the world’s most heavily populated refugee camps. It had capacity for 130,000. Today, despite the concerted efforts of the Jordanian government and its international partners — a UN fact-sheet lists schools, health centres, and plans to roll out electricity — it is home to just 28,000.

Syrian refugees would rather take their chances in the country’s cities and towns, where they eke out a hand-to-mouth existence, sustained by handouts from the UN and NGOs, and casual work in the underground economy. Many are living in destitution, resorting to begging, child labour, and survival sex. Recent estimates are that nine in ten live below the Jordanian poverty-line.