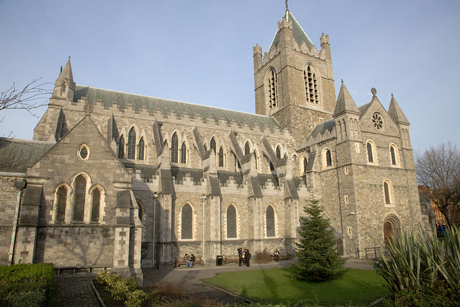 Following negotiations, an Easter Day Eucharist will now take place at Christ Church Cathedral in Dublin; as well as a special liturgy to mark the centenary of the Easter Rising. Photo: William Murphy/Flickr

[Anglican Communion News Service] Dublin’s Christ Church Cathedral will hold an Easter Day service after all, following discussions between diocesan officials, the government, and the Irish police service, An Garda Síochána. It had previously been announced that security around commemorations of the centenary of the Easter Rising would make the service impossible. Six city centre churches will remain closed.

“The Eucharist will be celebrated at a said service in the cathedral at 10.00 am,” the Archbishop of Dublin, the Most Revd Dr Michael Jackson, said in a joint statement with the Archdeacons of Dublin and Glendalough and the Acting Dean of Christ Church Cathedral.

“Clergy, staff and congregation will be facilitated in such a way as to allow them through the outer security cordon and park in a designated area near the cathedral. A shuttle bus will bring them from there to the cathedral where they will gain access through the West Door.”

In addition to the Easter Day service, the cathedral will hold a special service at midday using a special bilingual liturgy that has been prepared by the Province’s Liturgical Advisory Committee to commemorate the 1916 Rising. During that service, as the parade is passing the cathedral, “the congregation will pray for the country and its leaders and remember those who died during the Rising,” the leaders said in their statement.

“The cathedral will then close for a short period and re-open its doors when the parade finishes and the crowds disperse, allowing pilgrims and tourists to visit.”

The Easter Rising eventually paved the way for the creation of an independent Irish nation.

Up to half a million visitors are expected to descend on Dublin on Easter Sunday. Security officials have imposed a ban on all vehicles entering Dublin city centre from 6.00 am and 8.00 pm. The Garda Síochána had previously asked that the front gates of Christ Church Cathedral remain locked for the day.

The new arrangements do not affect access restrictions to the six other Anglican churches in the City Centre, which will remain closed on Easter Day.

“We in the Church of Ireland are very happy with the outcome of the negotiations with Government and An Garda Síochána to ensure that worshippers have the option to attend Christ Church Cathedral and St Patrick’s [Roman Catholic] Cathedral for Easter celebrations,” the Church leaders said. “The Archbishop and senior clergy continue to feel that it is not practical to have every Church of Ireland church in the city open on Easter Day given that the majority of the parishioners do not live in the vicinity of these churches.

“The expectation remains that there will be a very large volume of people to watch the parade. Consequently, the decision of the affected clergy to provide alternative places to worship remains as previously stated.”