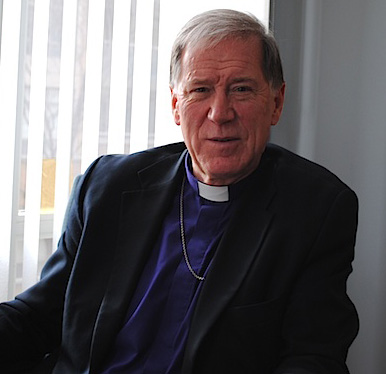 Bishops have a responsibility to something more than their personal conscience, says Archbishop Fred Hiltz. “We are all charged, notwithstanding our own personal view on anything…we all make a vow to guard the faith and unity of the church.” Photo: André Forget

[Anglican Journal] While the House of Bishops has said that the upcoming vote to allow same-sex marriage in the Anglican Church of Canada is unlikely to get the number of votes it needs from their order, Archbishop Fred Hiltz said it is not a clear-cut division.When it comes to allowing same-sex marriage, the bishops seem to be thinking “yes,” “no” and “maybe” in roughly equal proportions, Hiltz said. A number of bishops in the Canadian church also have a “holy desire” to consider alternatives to a simple yes-no vote on same-sex marriages, he said. Some have given considerable thought to other alternatives, and these are likely to be the main topic of conversation when the House of Bishops next meets in April, he added.

“The reality in our House [of Bishops]—and I think it’s a reflection of what’s in the church at large—is that, I think, we’ve got about a third of the bishops that would clearly love to see us move, and we’ve got a third that would say no…and I think we’ve got a third that are really wrestling. That’s my sense,” Hiltz said. “So clearly you haven’t got a two-thirds either way.” Since a change to the marriage canon is considered a matter of doctrine, it will need the approval of at least two-thirds of three orders — laity, clergy and bishops — at two consecutive General Synods to be passed. The first such vote is slated for this July.

The primate was responding to a question on whether any sort of headcount had been taken at a special meeting of the House of Bishops last month to discuss a proposal to change the church’s marriage canon to allow same-sex marriages.

A few days after the meeting, on February 29, the bishops issued a statement reporting that they had come to the realization that the resolution in its current draft form would not likely get the two-thirds majority it needed from them. But the statement included few details on how the bishops had reached this conclusion, and did not mention any kind of more precise breakdown. Some bishops later said in an interview that no formal vote was taken, but that when they each talked about where their diocese was on the matter, it was evident where they were inclining toward.

“I don’t think it’s necessarily important to me to give numbers,” Hiltz said. “What I agreed to with the bishops was that I could easily and with confidence say…that a two-thirds majority was just not there.”

“There are some people who would want us to have been blessing same-sex marriages for the last 10 years. And there are some people who will never, ever, because of their theological conviction, because of their read of Scripture, ever be able to be there,” Hiltz said. “There [are] people, I think, in the church who would like to see us move ahead with same-sex marriage, but they’re wondering, ‘Is now the right time?’ ”

Some bishops, Hiltz said, feel the church should be given more time to ponder the change. It is something the Indigenous community within the church has also asked for, he noted.

Hiltz said that although he’s aware the release of the bishops’ statement struck some people as though it was “intended to scuttle things”— to interfere with due process—the bishops were, in fact, acting in good conscience.

“They took the higher road and were honest with the church, I think,” he said.

The question of whether or not to allow same-sex marriage in the Anglican Church of Canada has frequently been portrayed as a stark choice between affirming or challenging LGBTQ Anglicans, but Hiltz said this doesn’t really reflect what he sees in the House of Bishops. Specifically, he noted that bishops have a responsibility to something more than their personal conscience. “As bishops, we are all charged, notwithstanding our own personal view on anything…We all make a vow to guard the faith and unity of the church.”

Hiltz said that, although the bishops were mindful of the sanctions announced against The Episcopal Church at the Primates’ Meeting in Canterbury earlier this year, they were “not at all obsessed with that.”

A more important consideration for the bishops, he said, was their role—affirmed in their vows of ordination as bishop—as guardians of the church’ s unity.

“No bishop — none of us — can say, ‘Well, what goes on nationally doesn’t matter to me,’ or ‘What goes on in the Communion doesn’t matter to me,’ because if we do that, we are, in my opinion, betraying one of the vows of our ordination,” Hiltz said. “It’s not easy being a bridge. But the bishop is called to be, among other things, a modern-day apostle, a good shepherd of the flock of Christ, one who builds up the body of Christ and one who is a focus of unity for the whole church.”

Hiltz said that regardless of the sometimes deep differences between the bishops on matters of human sexuality and the question of marriage, there was “a deep desire to continue to try to walk together.” There was, he noted, “a holiness about our patience with one another throughout the meeting. Nobody lost their cool, and yet there were very frank exchanges.

Knowing how the bishops are likely to vote, Hiltz said, is likely to help Council of General Synod (CoGS), the church’s governing body between General Synods, to prepare for the vote on resolution when it meets March 10-13.

CoGS was charged by the last General Synod with coming up with the actual text of the resolution on changing the marriage canon, and next week at CoGS, in the wake of the House of Bishops’ statement, Hiltz said, “there will be undoubtedly some conversation about, ‘Should we consider that text, should we in any way amend it, and if so, do we need to have a rationale for that?’ ”

Many people in the church, Hiltz added, are in favour of widening the discussion of human sexuality to include not just LGBTQ rights but the abuse of sexuality in general—in sexual abuse and violence, for example—a position to which he himself, he said, is becoming increasingly sympathetic.

“For some people, there’s a real impatience growing around the church’s need for a much stronger voice speaking out against the abuse of our God-given sexuality in all the terrible ways in which that happens,” he said. “My God…we need to be saying so much more about the way people are being sexually abused, and dumped and trashed…My passion is beginning to burn more and more [around that]…We need to start dealing with that.”